Update on Air quality monitoring after an oil leak

March 17, 2011
Original Post, January 18, 2011: In our post about the fire hydrant marker, I wrote that the next post in this occasional series would be about the fire alarm box.  Instead, it is about an air quality monitoring device I spotted at the Bleecker Street oil leak site. 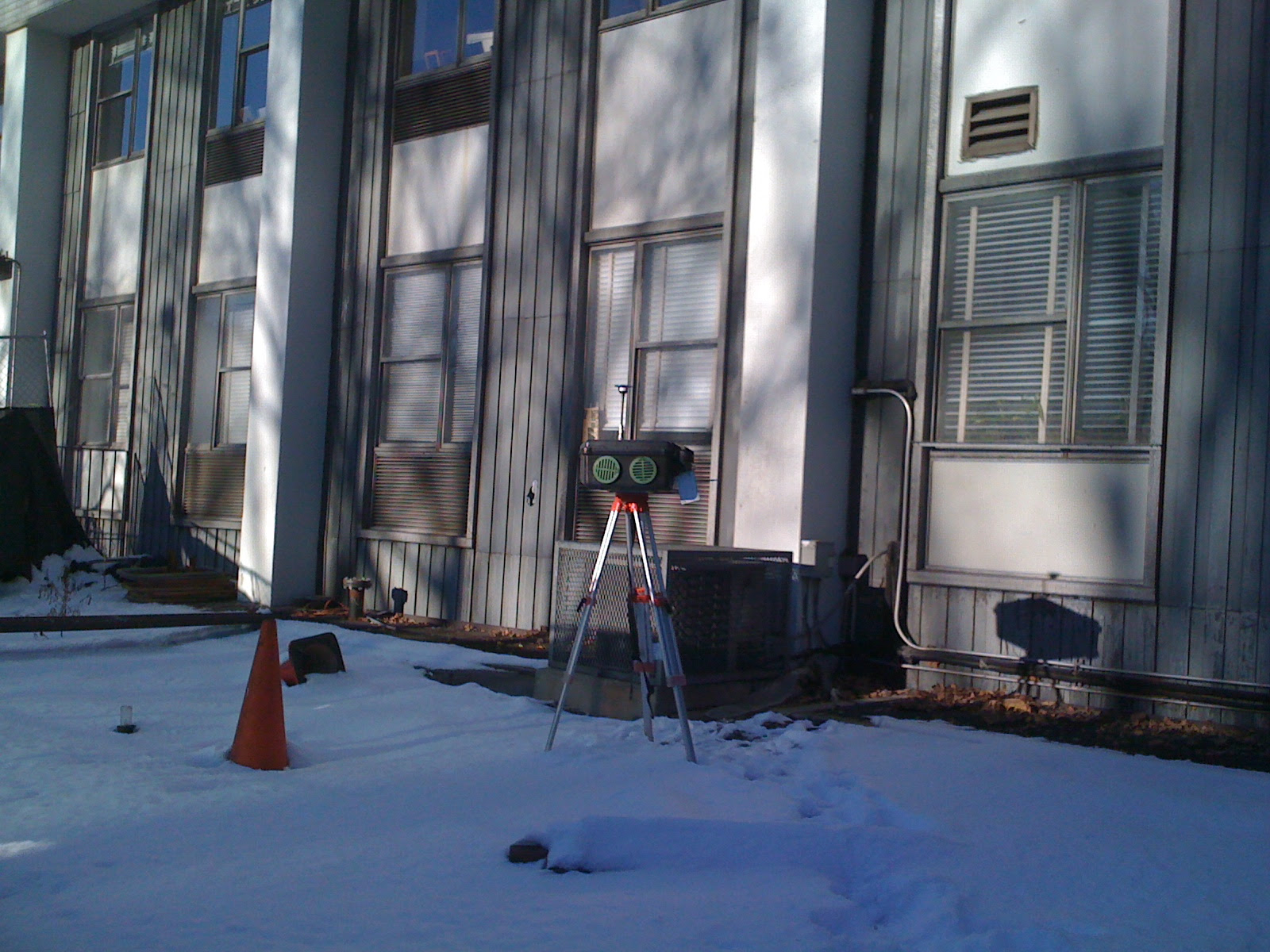 On December 6, 2009, a significant oil leak of No. 6 heating oil from a boiler room serving 3 and 4 Washington Square Village on Bleecker Street (NYU faculty housing) was discovered.  The university stated that 16,000 gallons of oil were "lost," 4,005 gallons were "recovered," and the remainder which is "tar like" is contained in the surrounding soil.  Community and news outlets such as The Villager reported that "about 5,000 gallons of the leaked No. 6 heating oil" were removed and "about 11,000 gallons of congealed oil in the soil" remain.  (It is interesting to note that community and news media refer to the incident as an "oil spill" while the university refers to it as an "oil leak" (see here).)

The university provides project updates online.  In January 2010, it was "pumping the oil out of the boiler room and cleaning residual oil from the surfaces of the boiler room."  A tree was removed in January of this year for greater access to the site.  The final phase of remediation is scheduled for completion on May 27, 2011 according to the August 2010 remedial action work plan written by Langan Engineering and Environmental Services and submitted to the NYS Department of Environmental Conservation.

Since the leak, residents have complained of headaches and odors.  The university has responded that oil might be smelled during the clean-up but air quality will be monitored "in accordance with the NYSDOH Community Air Monitoring Program and will be constant and ongoing."  No information about the pollutant(s) being monitored is given though "volatile organic vapors" was mentioned in the Langan report dated May 2010.  The device I photographed on January 13, 2011 is not always on the site so perhaps it is not an air quality monitor or there are other devices on the site I have not noticed.  (Here is a list of air monitoring instruments used by NYS Department of Environmental Conservation).

In 2009, I attended a landscape architecture theses presentation at UC Berkeley.  A master's student, Jesse Jones, had developed a phytoremediation plan for vacant lots in the Lower Bottoms neighborhood of Oakland.  One respondent thought Jones should use plants not only as markers of the types of pollution at each site (plant A = pollution 1 is on site), but also as signals of the stages of cleanup (plant A's leaves are wider than they are long = 85% of the pollutant has been absorbed).  Remediation at the Bleecker Street oil leak site is illegible; no information notifying passersby of the leak has been posted on or near the site. in the Lynchian sense.  The fence surrounding the cleanup site is cloaked in an almost opaque green fabric.  And the information released by the university seems to be the minimum required by the law.  If site cleanup had to rely to some degree on phytoremediation, a la Jones, then residents and passersby, could read the progress of the cleanup of the site.

Thorough cleanup of the leaked No. 6 heating oil is essential due to potential adverse impacts on humans. From the National Park Service (NPS) Environmental Contaminants Encyclopedia:


Fuel oil #6 would be expected to be a skin, eye and respiratory irritant and a CNS depressant from inhalation of large amounts of the vapor or mist. Prolonged or repeated contact with the skin may produce a defatting dermatitis with dryness and cracking. This product may contain substances which have caused kidney damage in laboratory animals [369]. Chronic effects of some of the constituents in fuel 6 (such as naphthalenes) include changes in the liver and kidney [766]. Exposure to petroleum in soil is predominantly of concern through a number of possible exposure pathways, including dermal contact with soil, ingestion of soil, inhalation of soil particulates, and ingestion of contaminated groundwater [824].

Effects on wildlife, specifically in an aquatic environment can be found in the fuel oil 6 encyclopedia entry, too.  On December 31, 2009, a few days after the leak, the New York Times  reported on a health commission study which found that "the highest levels of fine particles, sulfur dioxide and other pollutants in neighborhoods where many residential and commercial buildings burn No. 4 or No. 6 oil."

Note: this post has been edited to include more information about No. 6 heating/fuel oil.

Update, January 31, 2011: Photos of the air quality monitoring device located just outside the remediation zone.  (None of the signs on the construction wall indicate that an oil leak remediation is underway.) 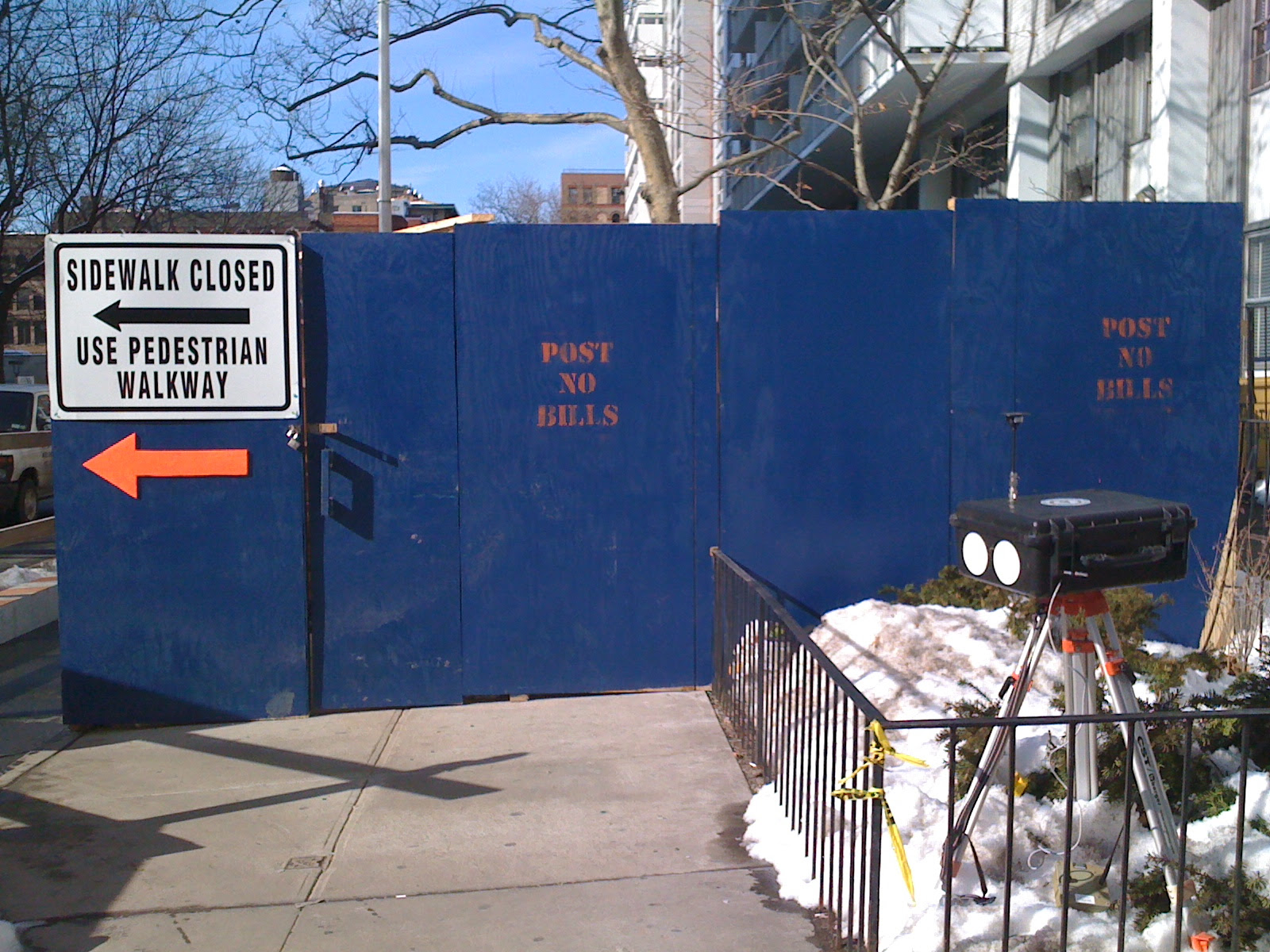 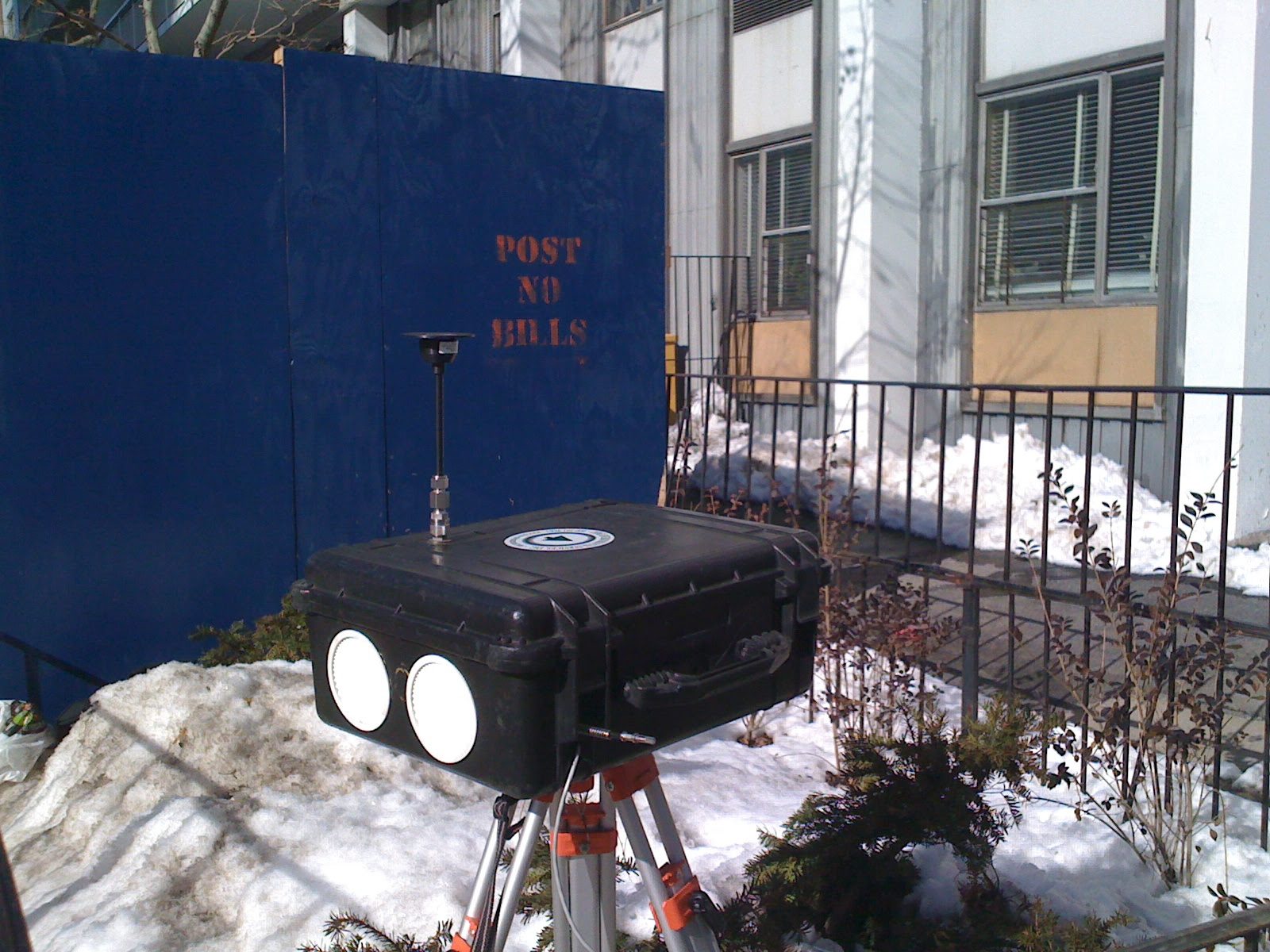 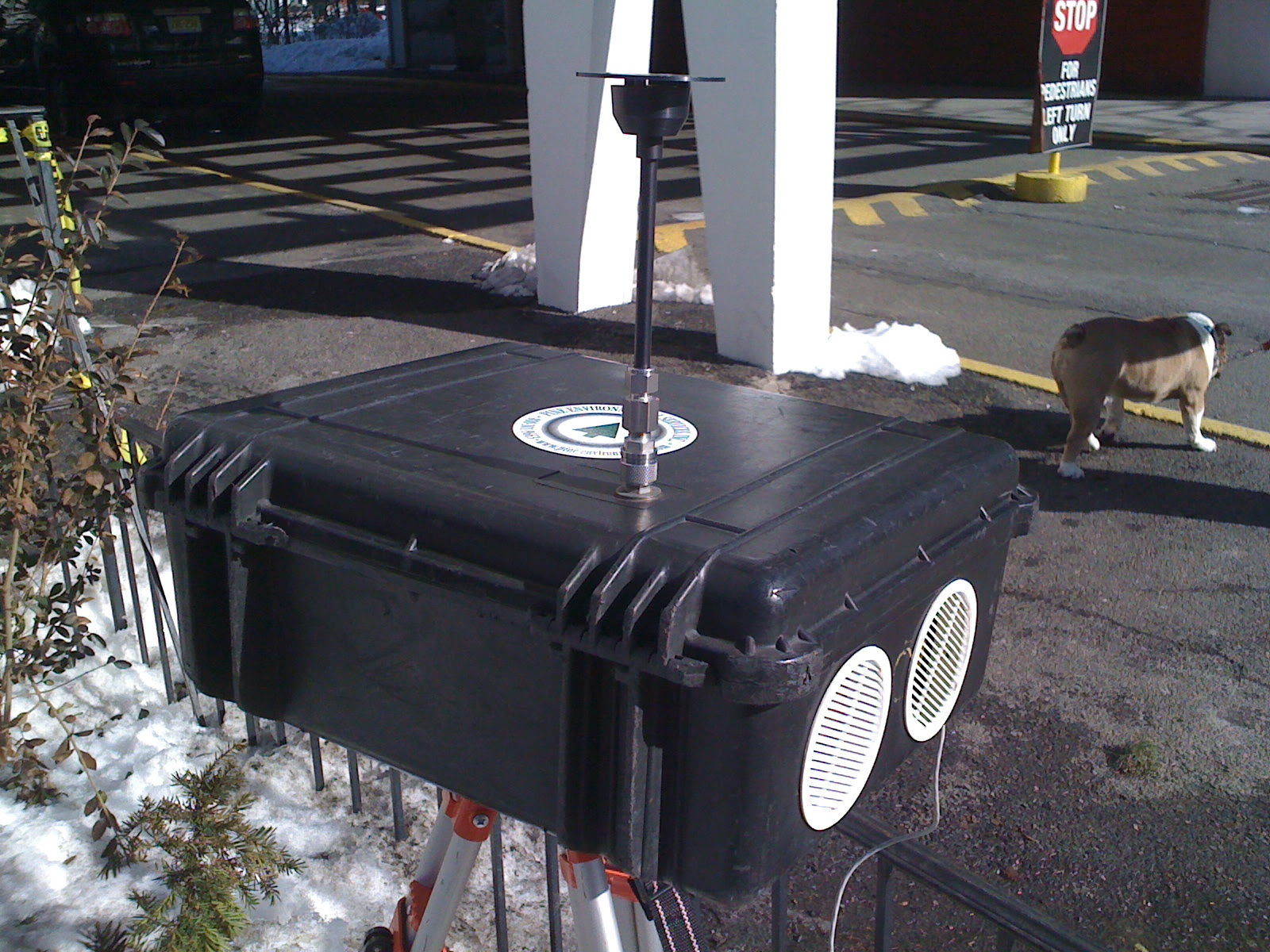 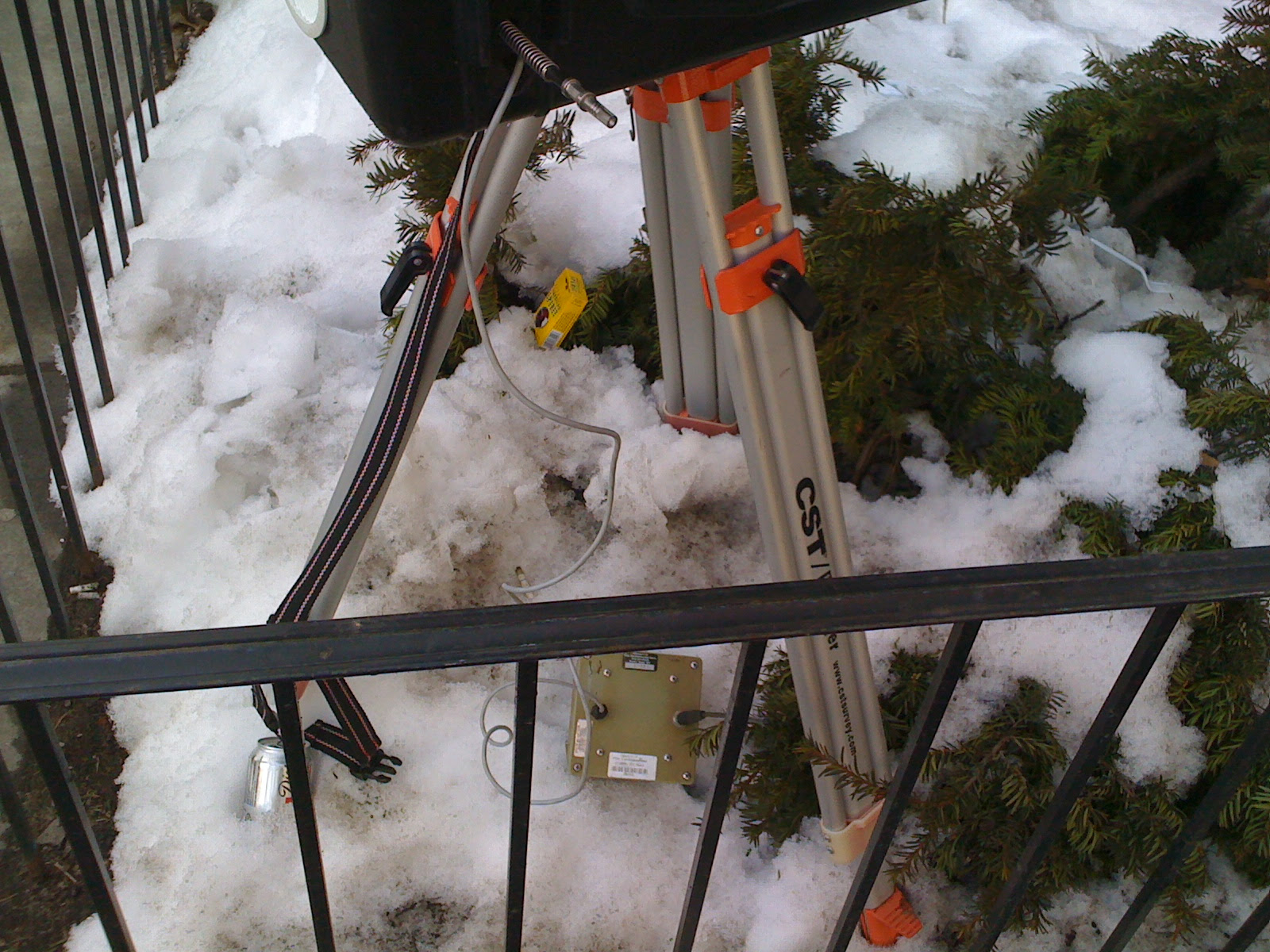 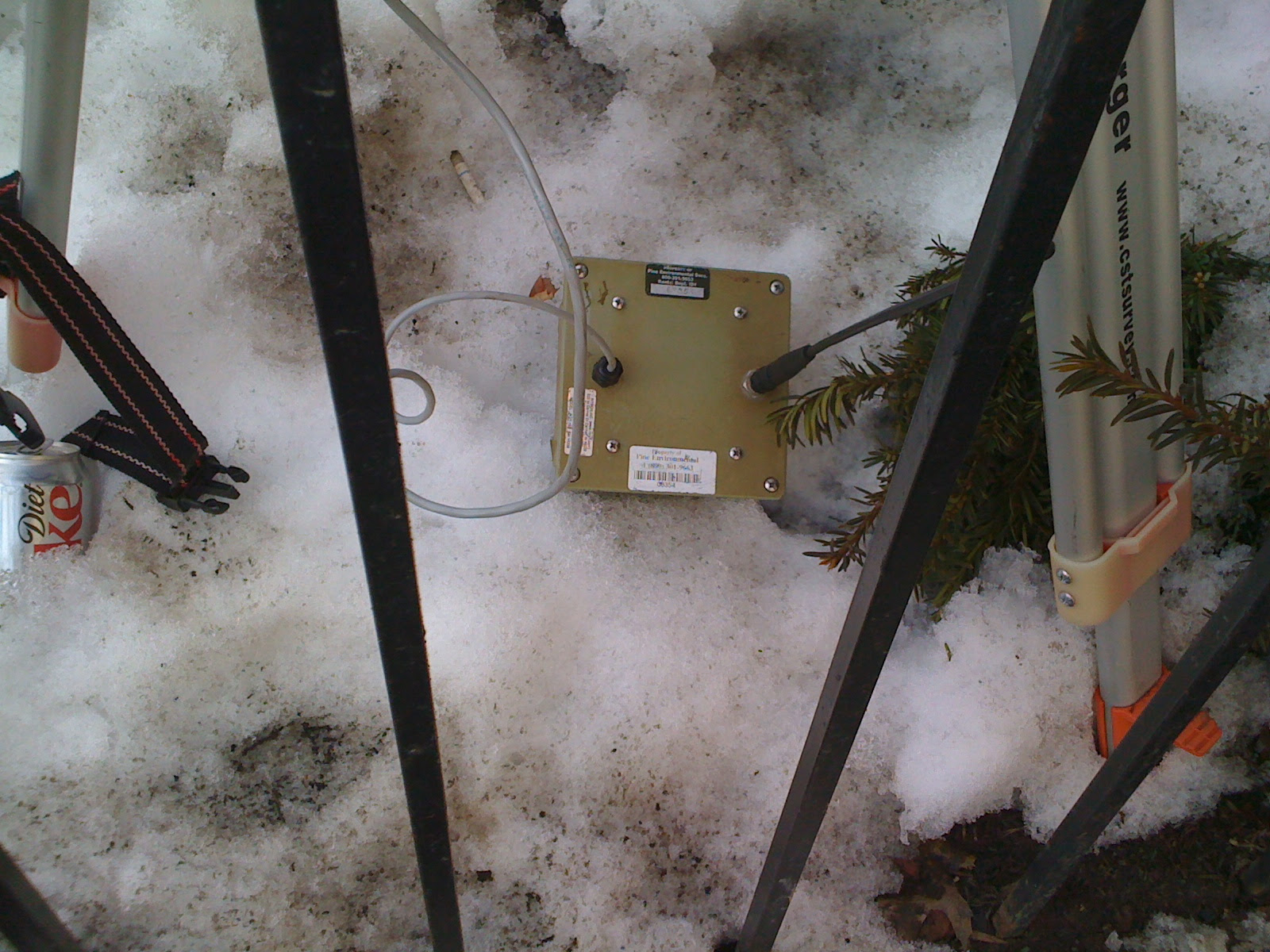 Update, March 17, 2011: Over the course of several days earlier this month, we noticed the arrival of a large mound of soil from the oil leak remediation site (see above) adjacent to a local playground. We also saw the soil being sifted and the siting of an air quality monitoring device. Concerned that contaminated soil had been sited and was being cleaned adjacent to a play space, we contacted NYU's Office of Government and Community Affairs. Beth Morningstar, Director, Strategic Assessment and Communications Office of the Executive Vice President, promptly responded to our query for information.  I spoke with Beth on March 14, 2011. 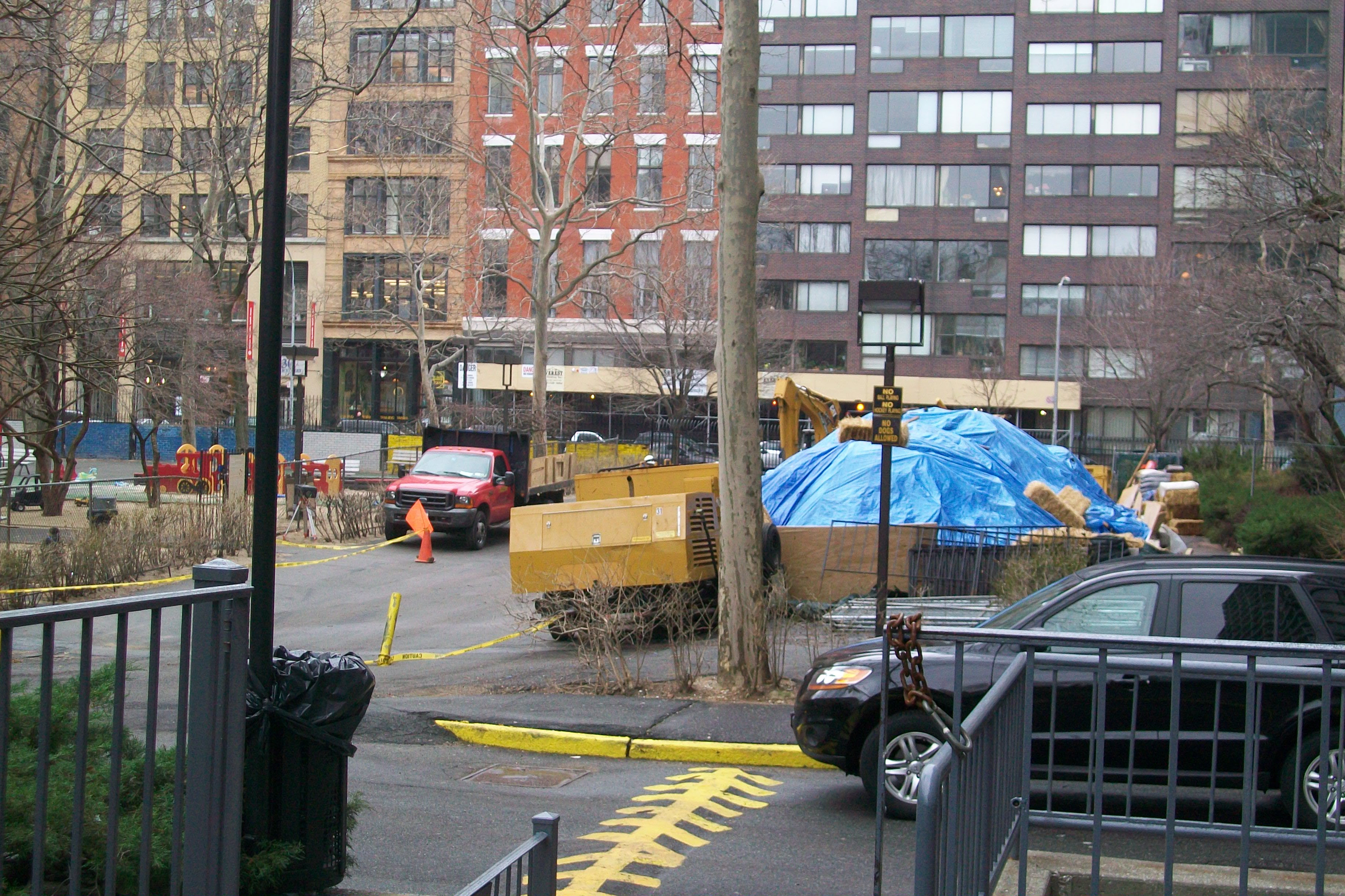 First, the soil will be removed from its current location. Second, the soil was clean, at least the borings tested clean/uncontaminated. Third, the soil was topsoil removed from the oil leak site, above the level of the oil spill. Fourth, the contractor wanted to re-use the topsoil to fill the hole left by the removal of tank number 3 (the source of the soil leak). Fifth, further examination of the soil revealed large (greater than 4") pieces of debris which disqualified the soil for use as backfill (the Washington Square Village apartments apparently were built on landfill). Sixth, clean soil (as determined by the contractor and independently by NYU).  Seventh, NYU used to rely on heating oil No. 6 as a tertiary source of energy; No. 6 has been removed from all the tanks at Washington Square Village.  (The university's primary and secondary energy sources are its co-generation plant and Con-Ed.)  Eighth, a committee has been convened to plan for landscape restoration after the remediation is completed. 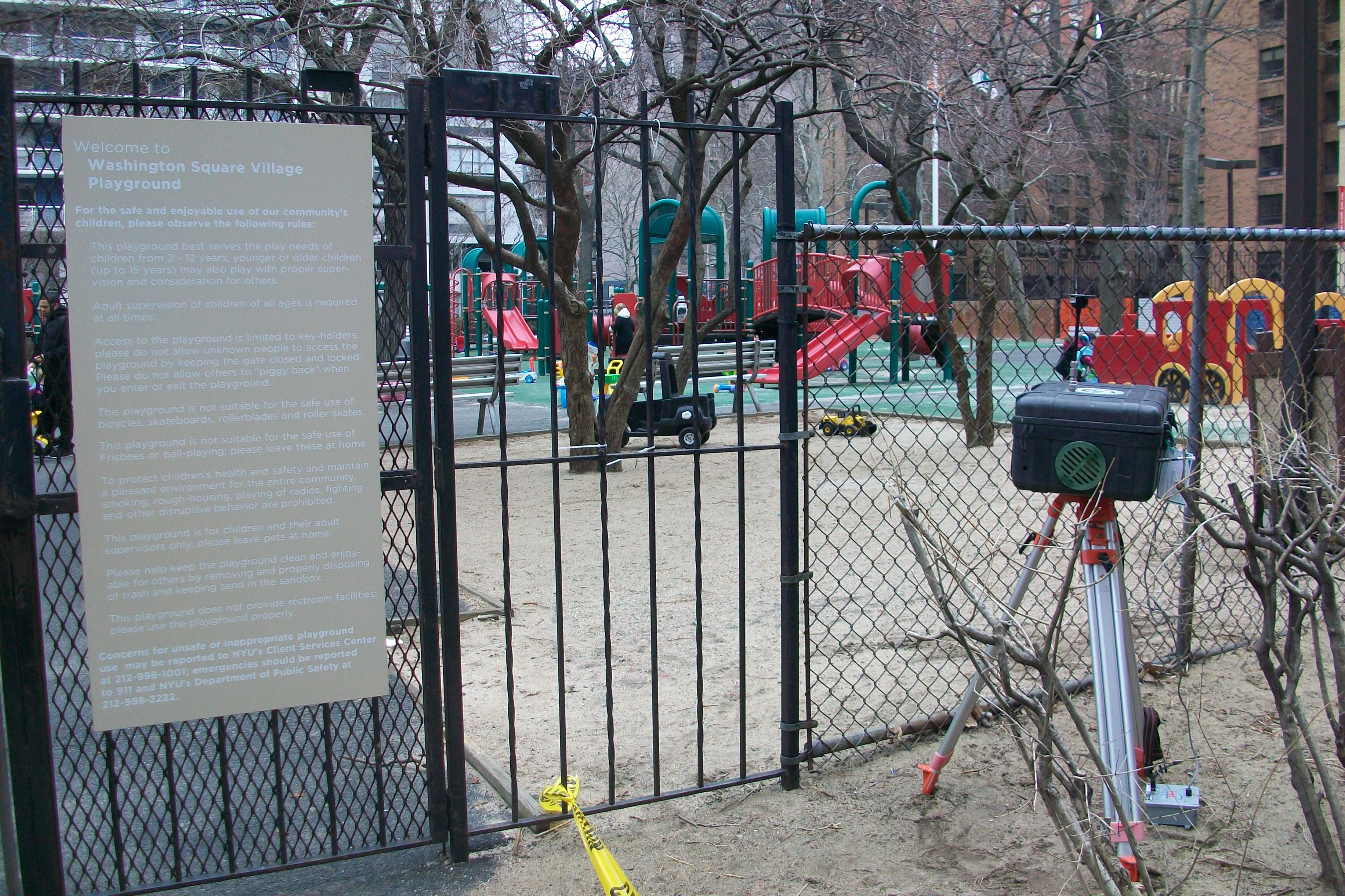 Current information about the oil leak remediation can be found at the NYU Construction page > Washington Square Village including Community Air Quality Monitoring Results.  The most recent results show "action level exceedences" which have been attributed to various maintenance work at 4 Washington Square Village.  A (brief) spill record can be read here via the NYS Department of Conservation website (the project number is Spill No. 0910543).  In other university news, a new proposed expansion plan was released today.  Read WNYC reporting here.