March 31, 2011
Writing on his blog, Connected by Nature, Ken Lo described Marsh Madness "as a personal exploration of wetlands – marshes, bogs, fens, swamps, prairie potholes, vernal pools – during the course of the annual NCAA tournament....“Brackishology” is a play on “bracketology,” a term used by sports folks to talk about the selections and matchups or brackets in the elimination tournament."  Consider this essay our entry.

Minetta Brook once ran above ground in the Greenwich Village neighborhood of New York.  Emerging between 21st and 20th Streets, it flowed through the western section of Washington Square Park to the Hudson River.

Before it was a park, a parade ground, and a cemetery, Washington Square Park was "a marsh fed by Minetta Brook."  The land has been described as "so undesirable" because the presence of the brook made it "low and wet" and only suitable for a potter's or pauper's burial ground (Maud Wilder Goodwin et al., Historic New York, 1897).  Victims of the yellow fever epidemics in 1795 and 1797 were also buried there.

In the 1820s, Minetta Brook was redirected from its original course and culverted in order to "dry out the soil" before constructing the park, wrote Julia Solis in New York Underground (2005).  The "contained and underground" brook did not earn Washington Square Park any points in the natural systems and features category of the National Register rating system applied by Jablonski Berkowitz Conservation, Inc. in their 2006 Cultural Landscape Report for NYC Parks.

On the origin of the word Minetta, the NYC Parks website provides the following information:


Local Native Americans called the stream "Mannette," which was translated as "Devil's Water." Over the years, this name was spelled and respelled and spelled again in a variety of configurations: Minnetta, Menitti, Manetta, Minetta, Mannette, and Minetto. The Dutch called the water Mintje Kill, meaning small stream. In Dutch, "min" translates as little, "tje" is a diminuitive, and "kill" translates as stream. The water was also known as Bestavers Killitie, Bestevaas Kelletye, Bestavens Killitie, Bestavers Killatie, and Bestaver's Killetje. 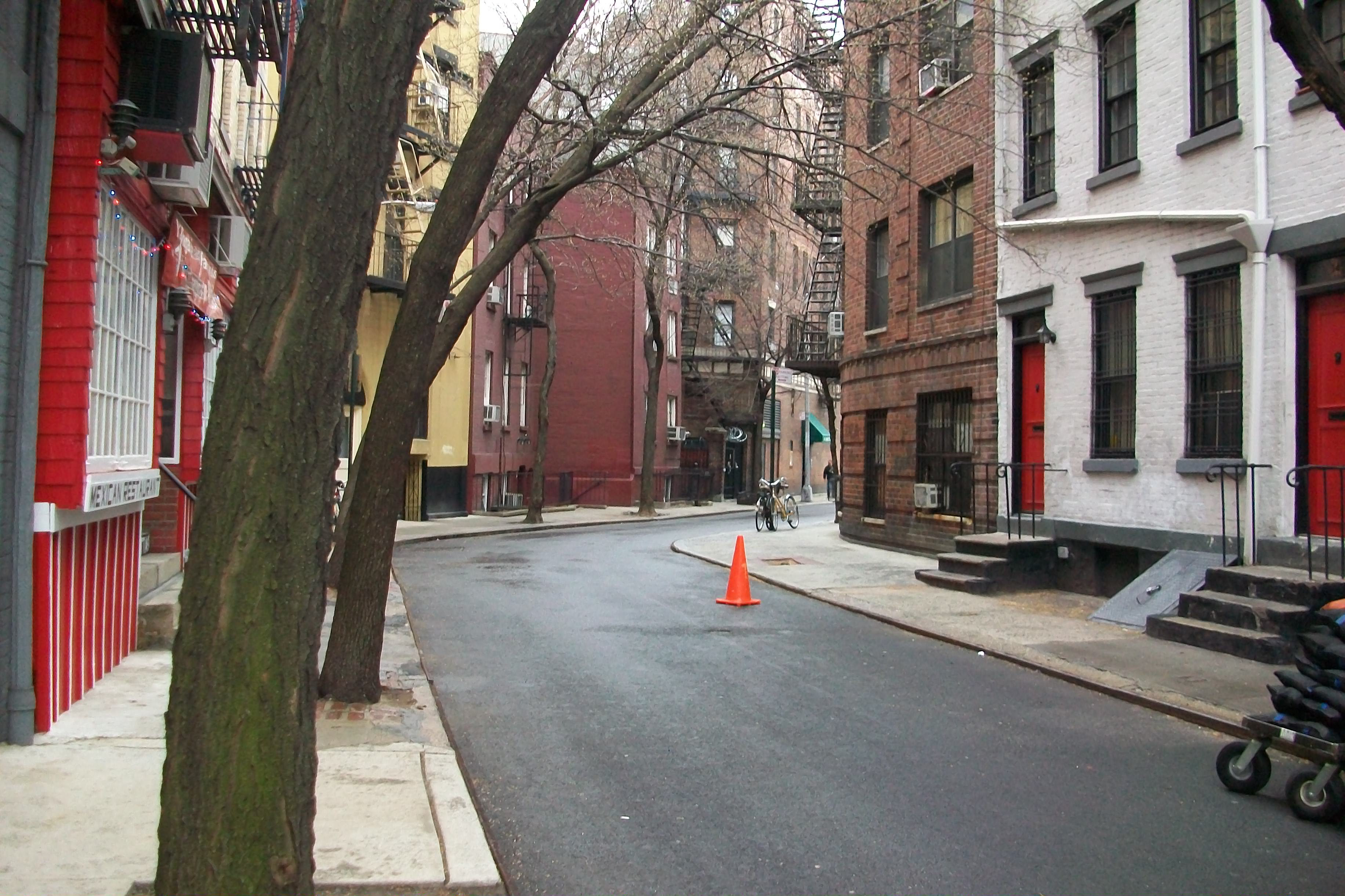 The brook can be "seen" in the curve of Minetta Street (between Bleecker Street and Minetta Lane; the latter is between MacDougal and Sixth Avenue).  According to Hope Cooke in her 1995 book Seeing New York, a dike to traverse the brook was built by freed slaves who settled along the brook on so-called "Negroe-lots," i.e. lots located in the "swampland."  This dike is supposedly "embedded" in Minetta Street. 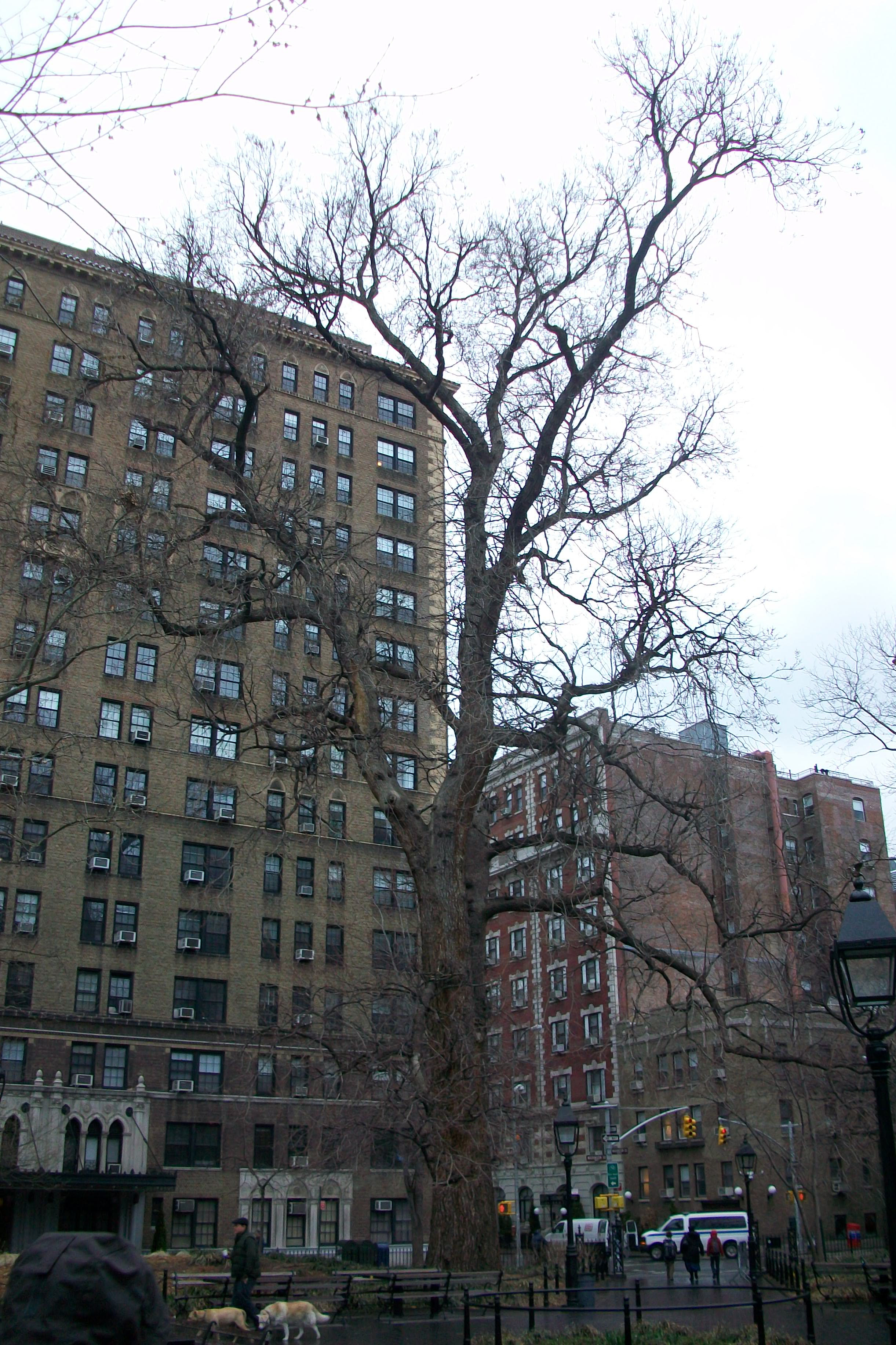 Cooke also  speculated that trees in the park thrive because of the "underlying streams."  It would be interesting to find out the current location of the (redirected and culverted) brook.  Though the English elm (Ulmus procera) in the northwestern quadrant of the park is not the "Hangman's Elm" of the 1800s (Washington Square Park Phase 1A Archaeological Assessment [pdf]), the tree is very old.  In 1989, NYC Parks estimated that the tree was 310 years; it is now 332 years old (Hangman's Elm wiki).  Might it be the oldest tree on Manhattan?

The brook also survives in the names of several area parks: Minetta Triangle, Minetta Playground, and Minetta Green.  Images of fish were carved into the concrete pathways in the Green, I think of the trout that used to run in the brook.

For photographs of an actually existing marsh, check out Kelly's essay about Marsh & Foster Islands in Seattle on the Metropolitan Field Guide blog.