How to: Sustainable parks and open spaces Walking by the Center for Architecture gallery today I noticed that the High Performance Landscape Guidelines: 21st Century Parks for NYC exhibit had been removed. The landscape guidelines were prepared by the Fellows of the Design Trust for Public Space and landscape architecture and operations staff at the Parks & Recreation Department.

Fourteen percent or approximately 29,000 acres of NYC is parkland and the Guidelines were developed to transform these existing parks into sustainable ones as well as to design beautiful and ecologically-healthy new open spaces.  The parks -- new and renewed -- will comprise the city's green infrastructure; they will not only meet the recreational needs of an estimated 9.1 million residents by 2030, they will help the city to achieve the sustainability goals outlined in PlaNYC. 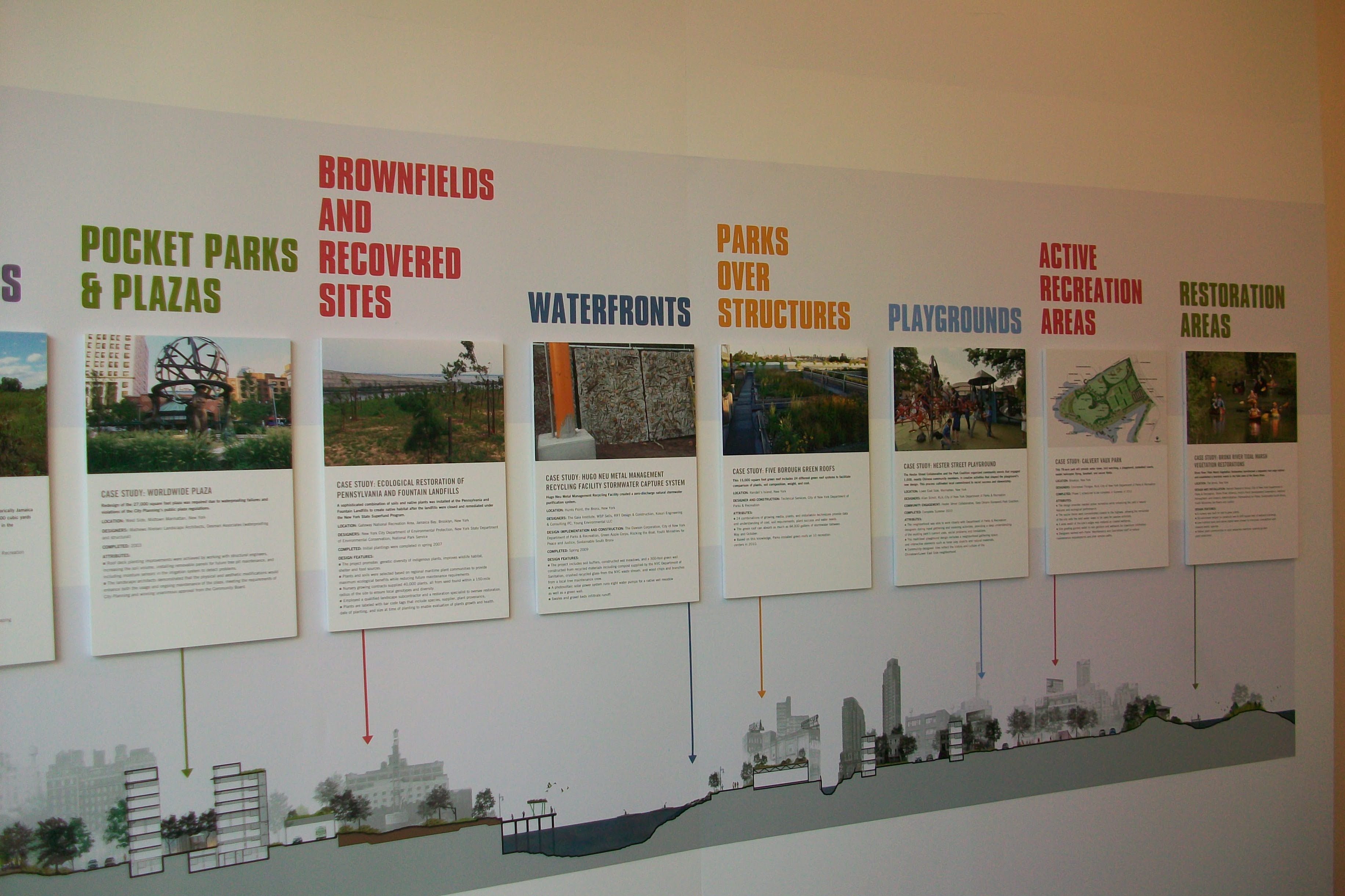 The manual is organized around "hundreds of best practices" or strategies to achieve these goals.  The manual also includes site inventory and analysis practices across different sites, from brownfields (ex: Concrete Plant Park) to playgrounds to parks over structures (ex: High Line), and importantly, best practices in design, construction, and maintenance and operations.

Soil, water, and vegetation are the primary natural resource components addressed in the Site Systems section of the Guidelines.  Of soils, the authors note,


Healthy soils are the foundation upon which sustainable parks are built. If soils are not prioritized as a critical resource worthy of care during design, construction, and maintenance cycles, parallel efforts to enhance the vegetative and water ecologies will be compromised.

Seventy percent of NYC's 45 inches of annual rainfall occurs in rain events of one inch or less. According to the manual, NYC's impermeability is "well beyond" 30% impermeability; at this level, "ecosystem functions [such as aquatic habitat diversity, water quality, and species habitat] are compromised." One of the principles of managing water is to capture stormwater (which I think includes snow melt) in parks versus the application of potable water.  (If you are interested in stormwater in NYC, check out the S.W.I.M. Coalition blog.)

Despite the urban-ness of NYC, the city's parks across its five boroughs support "23 distinct plant communities."  (The manual does not provide the "original" number of plant communities found across the city.)  These 23 plant communities, in layers (upper, middle, and lower story) provide ecosystem services and aesthetic values.

The Center for Architecture's exhibit presented the Guidelines in two ways: (1) by scale and (2) by the type of site.  A small scale site is Pearly Gates Park in the Bronx (0.66 acres); a large one is Fort Totten Park in Queens (60.39 acres); and a landscape site is the Bronx River Watershed (the Bronx River Parkway is 205.65 acres). 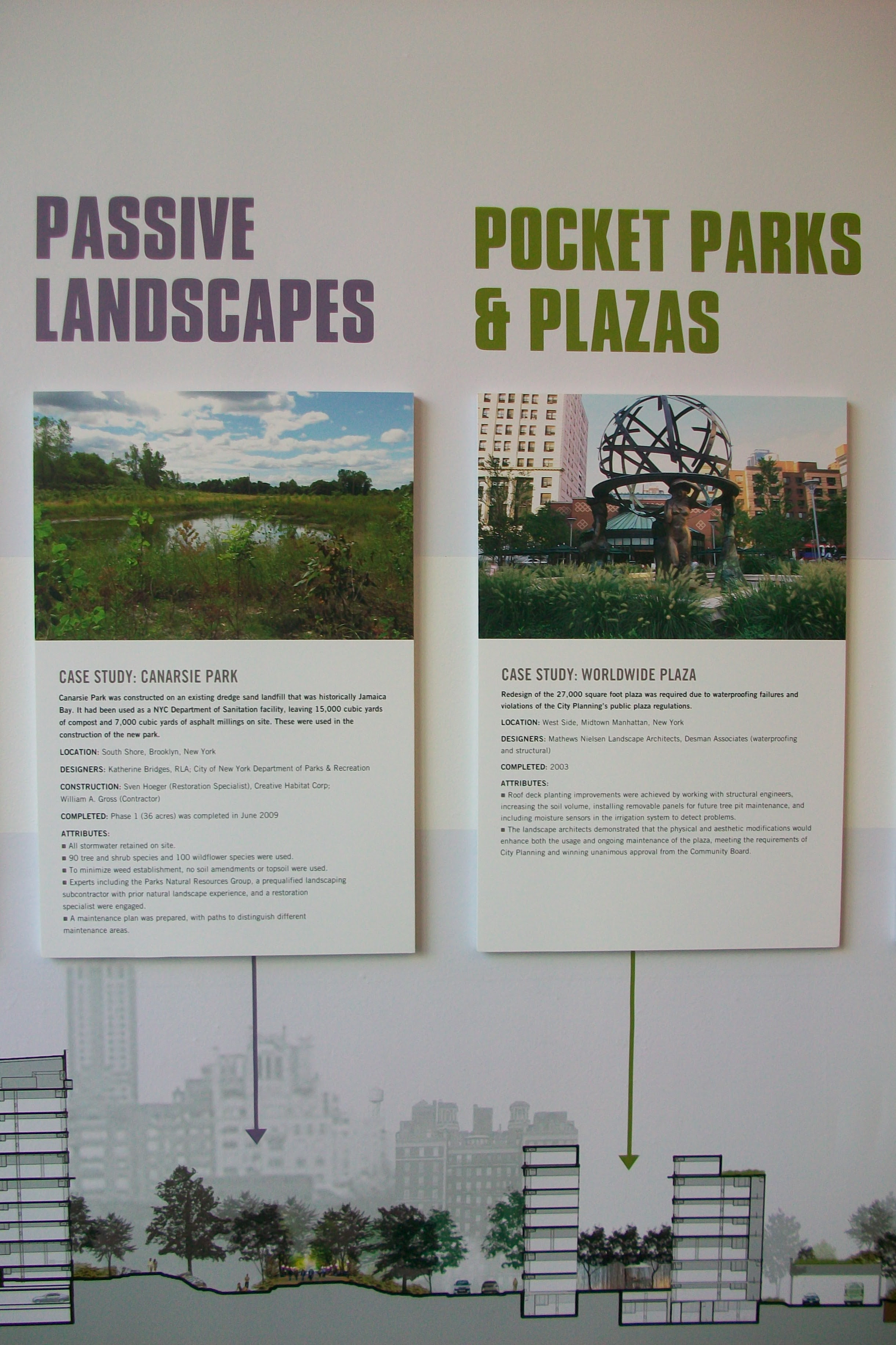 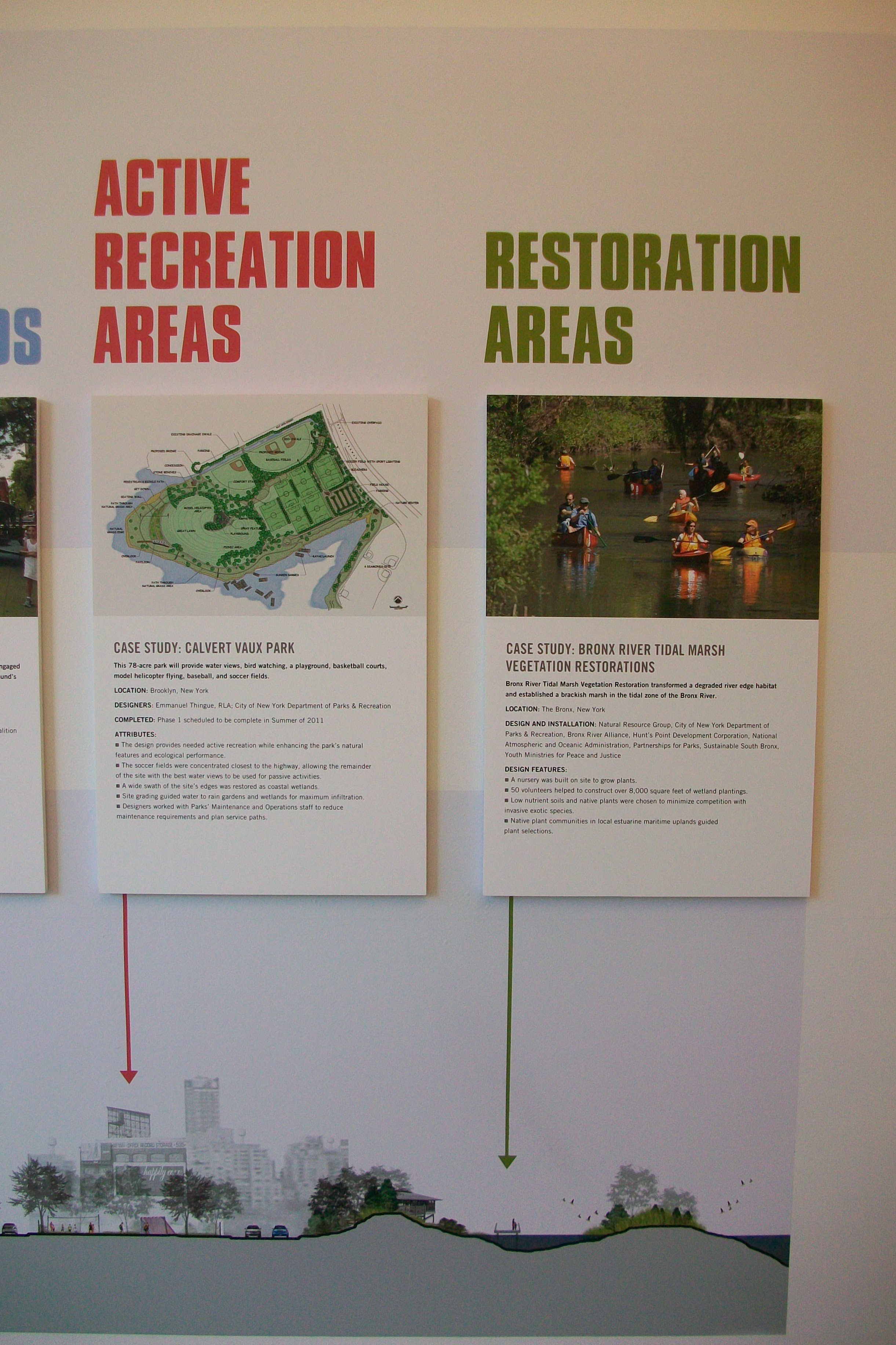 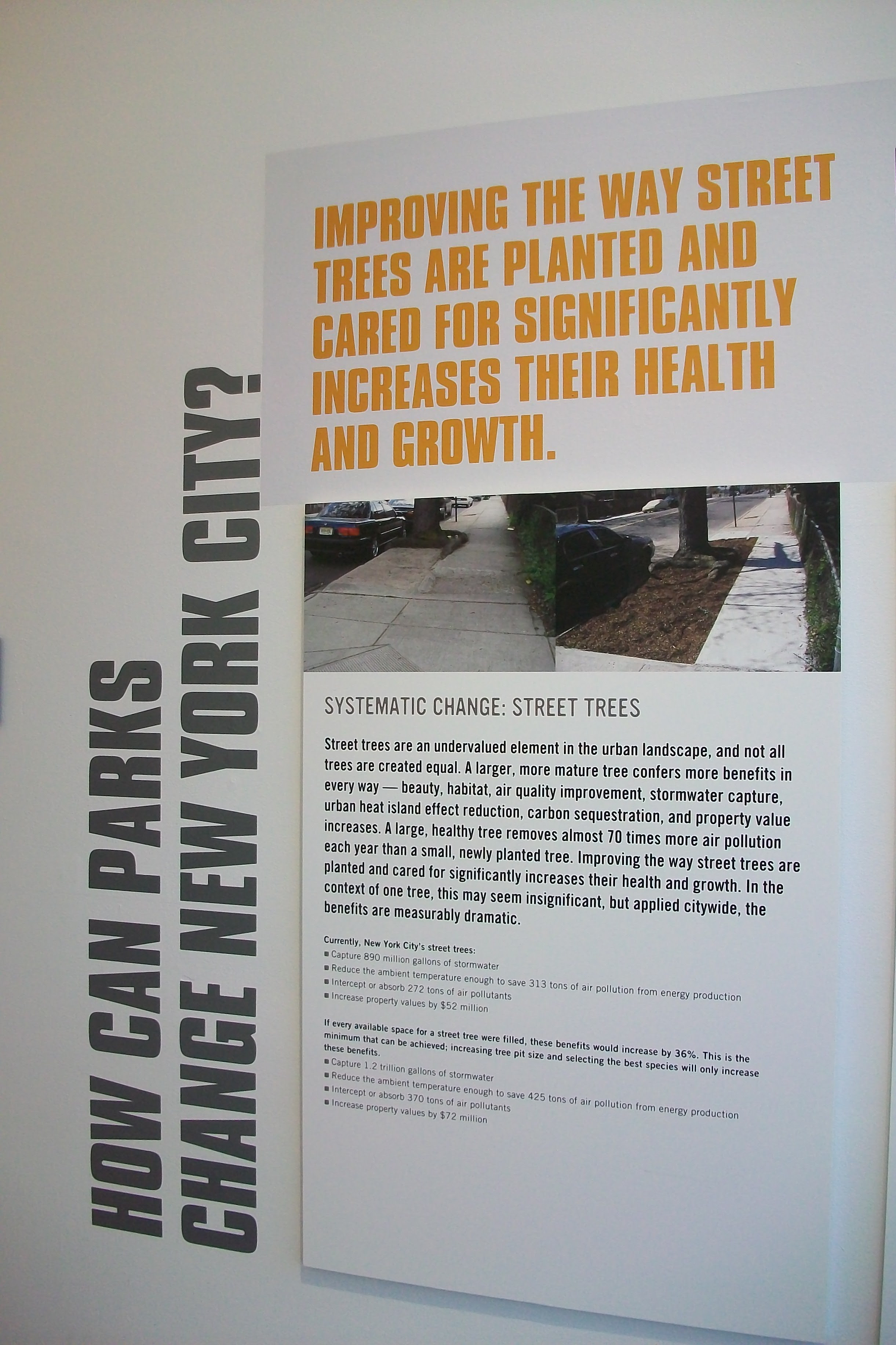 One of my favorite boards from the exhibit was the one that discussed the role of street trees in the sustainable city.  The undervaluing of street trees is acknowledged as is the difference in value between a large, mature tree versus a smaller, newer tree.  (We have written about this difference here.)  For example, the larger tree "removes almost 70 times more air pollution" though demographic information like species and size are not provided.  If every potential street tree planting area were planted, then the city's street tree canopy would, according to the display, capture 1.2 trillion gallons of stormwater, save 425 tons of air pollution (cooler air means less energy produced to artificially reduce ambient temperature), absorb 370 tons of air pollution, and increase property values by $72 million.  USDA Forest Service researchers published assessments of the city's street trees and urban forest in 2007.  The Parks & Recreation Department conducted a street tree census in 2005-2006 (population: 592,130 street trees) and previously in 1995-1996.  More information about the City's trees can be found at the MillionTreesNYC website.