Nonprofits and municipalities have developed numerous ways to broadcast tree care and benefits information to residents. In this post, we highlight several paper and web-based methods of getting the word out about tree stewardship and environmental services. You are probably familiar with nutrition labels on packaged foods.  Now, the Urban Natural Resources Institute (UNRI) has developed an urban Tree Nutrition/Benefits Label.  UNRI in partnership with the Massachusetts Department of Conservation and Recreation, UMass Amherst and the Town of Amherst created labels showing the ecosystem benefits produced by trees.  The project was implemented at the Amherst Sustainability Festival in 2010.  Forty trees were surveyed using software developed by Casey Trees, and urban forestry nonprofit in Washington, D.C. Each label is bar-coded to "attract" the attention of passers-by.  (These bar codes are not scannable QR codes or Microsoft Tags.) 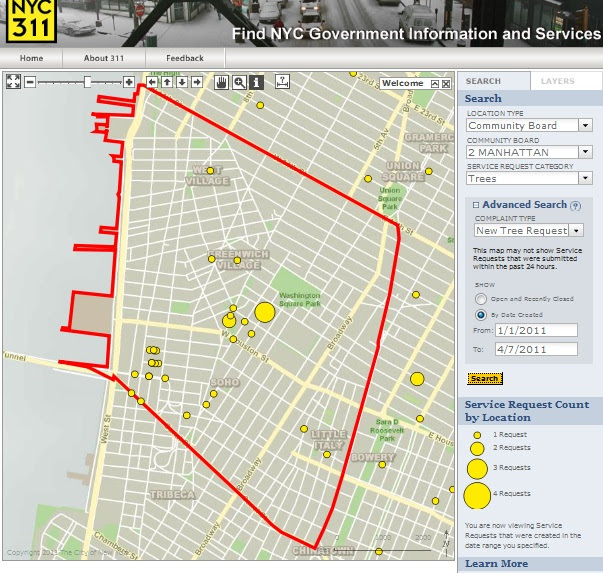 Residents of NYC can call 311 "to get information, report problems, and request services." These actions can be taken online, too.  In February 2011, the NY Times reported that then Mayor Bloomberg had launched an online mapping service for 311 calls. Using Open311 Wiki, maps can be charted by location type, service request category, and complaint type.  Here is a map of new tree requests made between January 1 and April 7, 2011 in Community Board 2 (Manhattan). Wired Magazine has an amazing graphic of the most common calls to 311 made between September 8 and September 15, 2010.  Damaged trees calls peaked at 10 a.m., 12 p.m., 2 p.m., and 7 p.m., while overgrown trees/branches calls peaked noticeably at 1 p.m.  Can anyone explain these patterns? 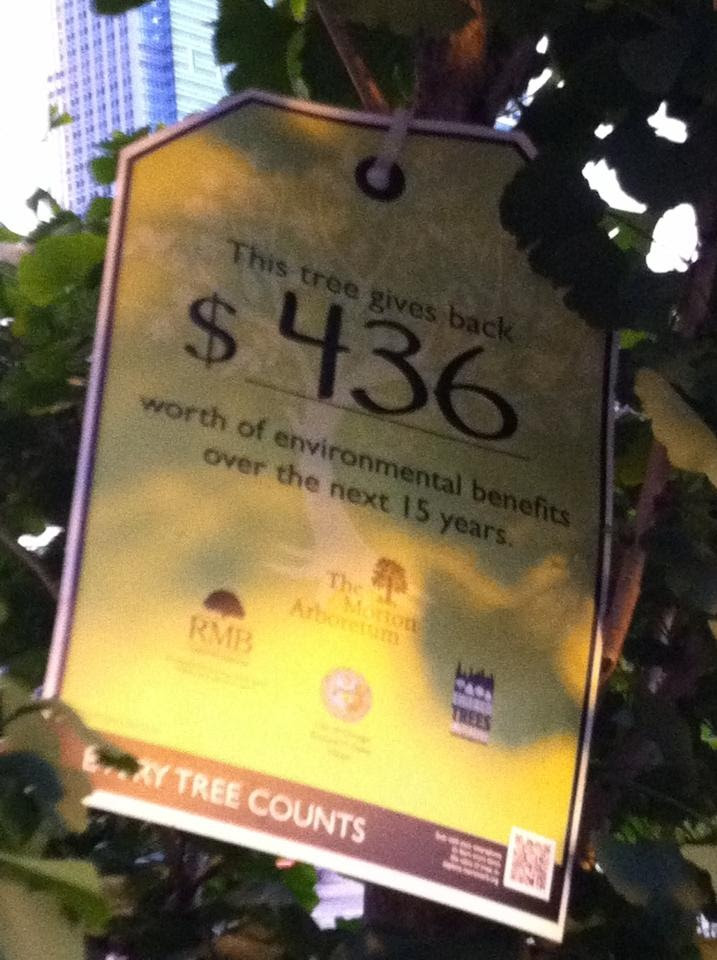 Since April, we have come across several more of these technologies for sharing tree information.  The Every Tree Counts tag pictured above is a project of the Chicago Trees Initiative campaign and was sent to us by a reader in Columbus, Ohio. Passersby can learn the monetary value this Ginkgo biloba provides to the City.  We wish the tag included the species name but the QR code in the lower right hand corner might lead to such information. 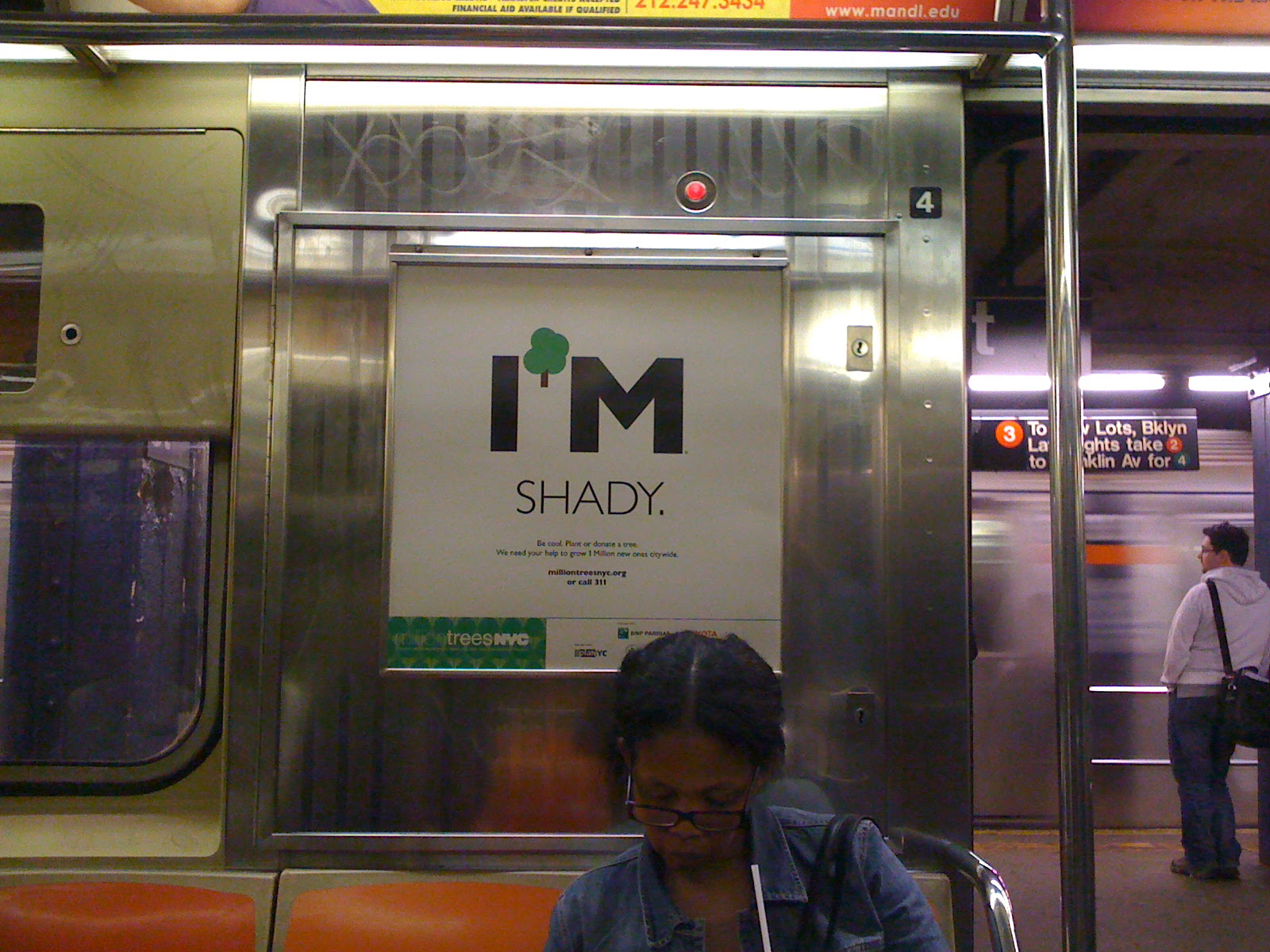 MillionTreesNYC developed the "I'M SHADY" campaign which includes subway posters, seen above, encouraging New Yorkers to plant trees and to support the initiative. 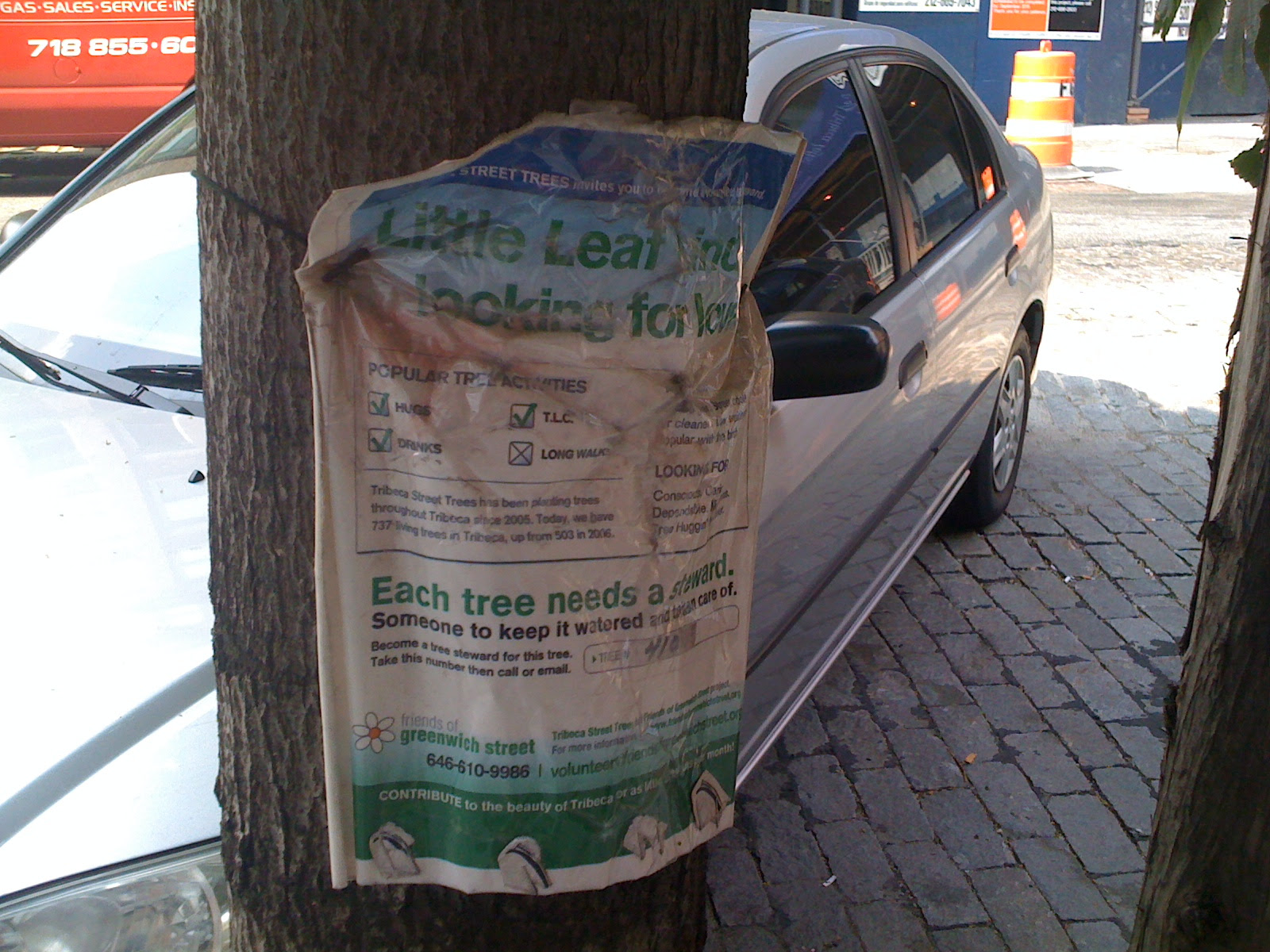 Also in New York is the work of Friends of Greenwich Street (FGS), a neighborhood improvement organization in Tribeca, which through its Tribeca Street Tree Project distributes "Each tree needs a steward" posters to encourage residents to care for the street tree(s) closest to their residence or business.


DC-based Casey Trees has designed three posters for its "25 to Stay Alive" watering campaign.  Based on precipitation and stream flow data, Casey Trees sends weekly watering announcements to residents through various media (Facebook, Twitter, and its homepage).  Residents are encouraged to water trees, especially young ones, with 25 gallons of water during periods of little to no rainfall. The organization provides rain gauges to residents who signed a tree watering pledge as well as "ooze tubes" or slow-release watering bags.

Finally, on April 20, 2011, Urban Natural Resources Initiative (UNRI) hosted Dr. Melanie Kirk's presentation on how urban forestry organizations can effectively use social media platforms to attract and grow new audiences. An archive of the webinar is available on the UNRI website.

Let us know what strategies are being used in your community to encourage tree care and how your city shares information about tree benefits.

P.S. Interested in more nature and technology? Read about the top 10 technologies for studying birds.