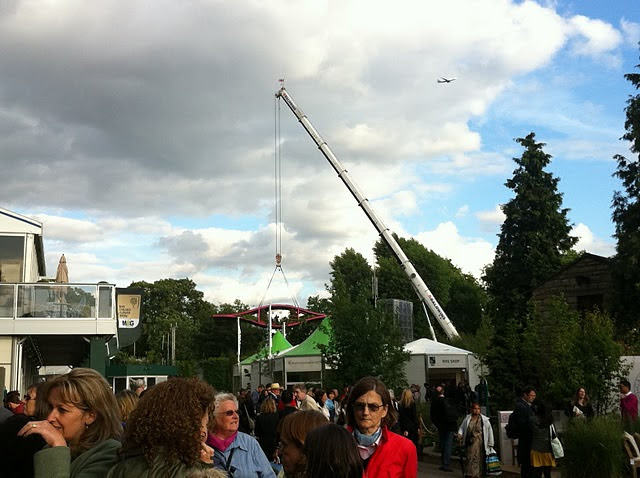 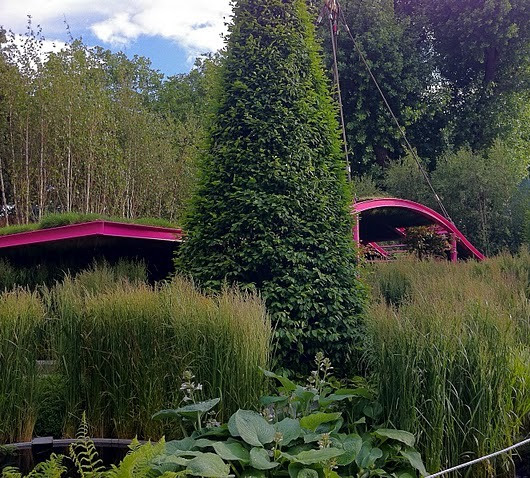 
Beneath the suspended pod, which is covered in living grass, a myriad of dark pools reflect what's happening above. Large hornbeams point up to the sky and soft mounds of box and pine create cloud-like shapes amongst the pools. A ribbon of rusted steel cuts across the pools leading you up to the sky garden. Once aboard and up in the sky there are views of the showground which have never been seen before. 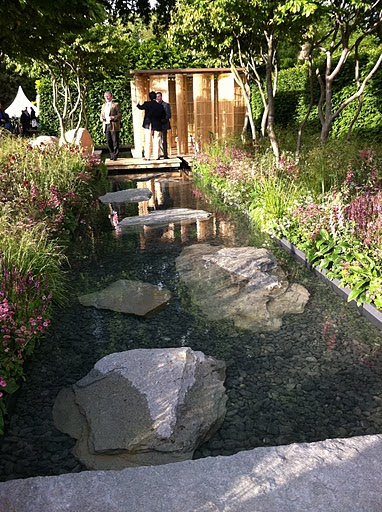 
plays with the notion of how nature and human design coexist in a garden. At the front of the garden floriferous and romantic borders run along either side of a long pool. Planted with pink, maroon and brown flowers the borders are softened by the hazy flower heads of Deschampsia cespitosa....At the rear of the garden is a more reflective, quiet area with a pavilion by Kengo Kuma and sculpture by Peter Randall-Page.

This garden is landscaped with the following plants: 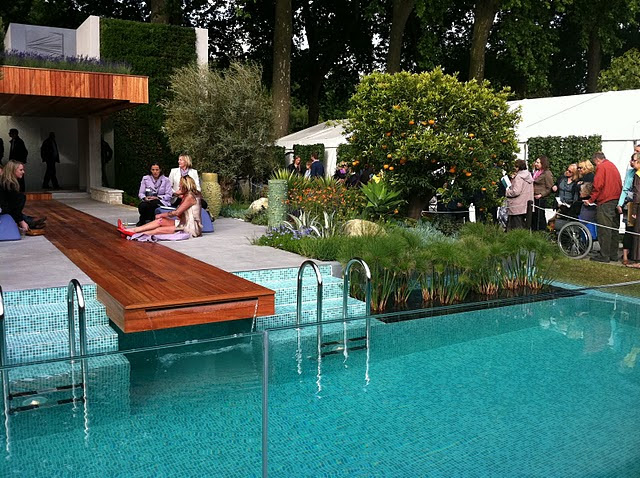 Another Gold medal garden is A Monaco Garden by Sarah Eberle.


The structures at the rear of the garden evoke the architecture of Monaco and it's high-rise living. From these buildings a cantilevered green roof floats, filled with lavender, its the perfect place to escape the Mediterranean sun. A space-saving green wall reminds us that Monaco is framed by huge cliffs cloaked in plants like Carpobrotus and Osteospermums.

The complete description can be read here. Did you know that the chocolate substitute carob grows on a tree? Caratonia siliqua is on A Monaco Garden's plant list along with these: 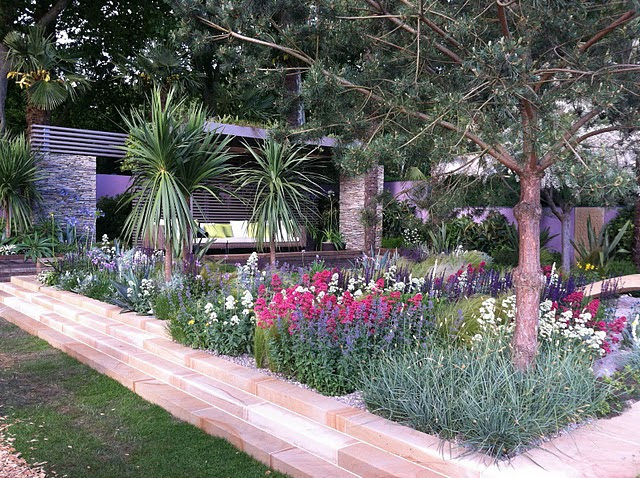 Probably our favorite garden - based on the photographs we received - is the Tourism Malaysia Garden by James Wong and David Cubero.  It's a Gold medal garden, too.  We thoroughly enjoyed our visit to Malaysia a few years ago.  The Wong Cubero garden is based on Malaysia house design:


In Malaysia temperatures and humidity can become intense, so many houses have internal courtyards which use water and lush planting to create a cool oasis. James Wong and David Cubero have designed their own Malaysian courtyard using modern materials, contemporary design and tropical plants. 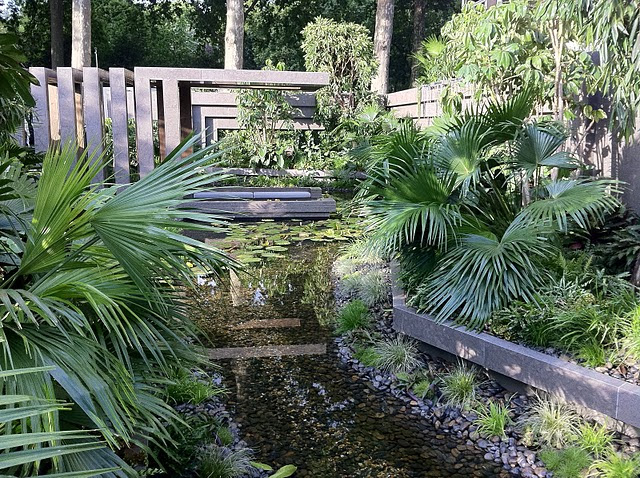 The long list of plants can be read here. 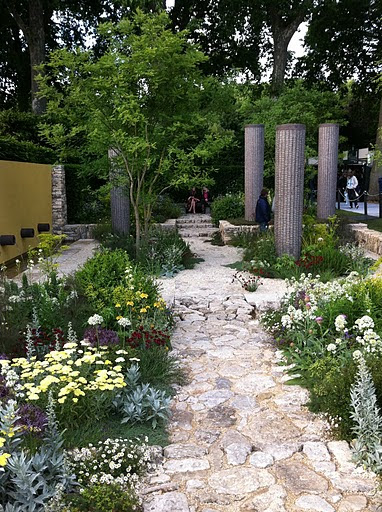 And the best of show (and a Gold medal, too) is The Daily Telegraph Garden by Cleve West. Here is entire description of the garden by the BBC, including the designer's inspiration:


This Best in Show garden may at first glance look like an excavated Roman ruin; large column sculptures which are repeated through the design. One, lying on the ground, looks as if it has fallen giving the garden a sense of time passed.

Playing with this idea of time elapsing Cleve has also used plants which self-seed and has placed them as if they've drifted around the garden on a breeze filling the earthy tones of the hard landscaping with accents of yellow from parsnips grown on Cleve's own allotment and red from Dianthus cruentus.

The garden is surrounded by a backdrop of Taxus baccata (yew) and specimen trees of Styphnolobium japonicum (the Japanese pagoda tree), rise up from the sunken gravel area and soften the impact of the columns.
Inspiration / influences

Cleve: The garden was "partly inspired, subconsciously, by a trip I made to Libya where I saw the... Roman ruins of Ptolemais". You wouldn't find a garden like this in Libya or the plants either, but it's a personal garden and Cleve believes that "If you don't create it from the heart, then it's very difficult to do a good job."

Here are the plants found in this Libyan-inspired garden: 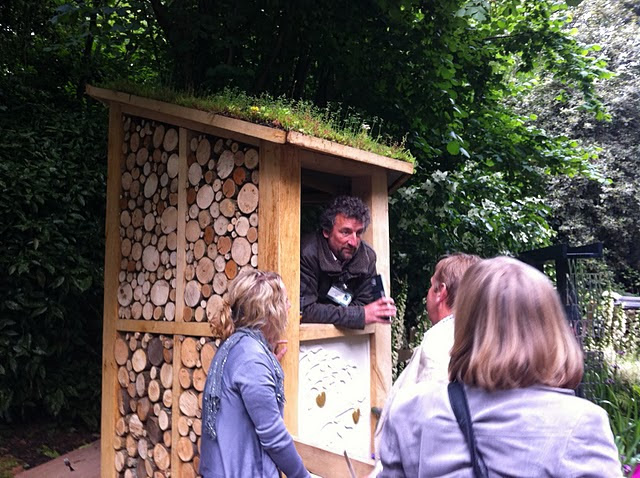 Last here is the B&Q Garden by Laurie Chetwood and Patrick Collins (another Gold winner) which features an insect hotel, above. The B&Q is


the tallest garden ever built at Chelsea thanks to the nine meter glass tower covered in plants which rises above a glass banqueting table. The planting on the tower is achieved using two methods, on one side a collection of window boxes hang filled with large crops like tomatoes, peppers and edible flowers, on another, a hydroponic living wall is full of culinary herbs....Mirroring the tower is an insect hotel, filled with boxes of insect habitats and materials for wildlife to nest in and use. The individual boxes were made by school children and put together to create a colourful and useful display.

Lavender, mulberry, rose, and linden or lime are among the plants; the full list is available here.  The insect hotel concept is a popular habitat strategy in wildlife studies and design.  Read the following pages at the Metropolitan Field Guide: Beyond the Hive Results and Insect hotels, mansions and other dwellings. Also see the Animal Architecture blog.