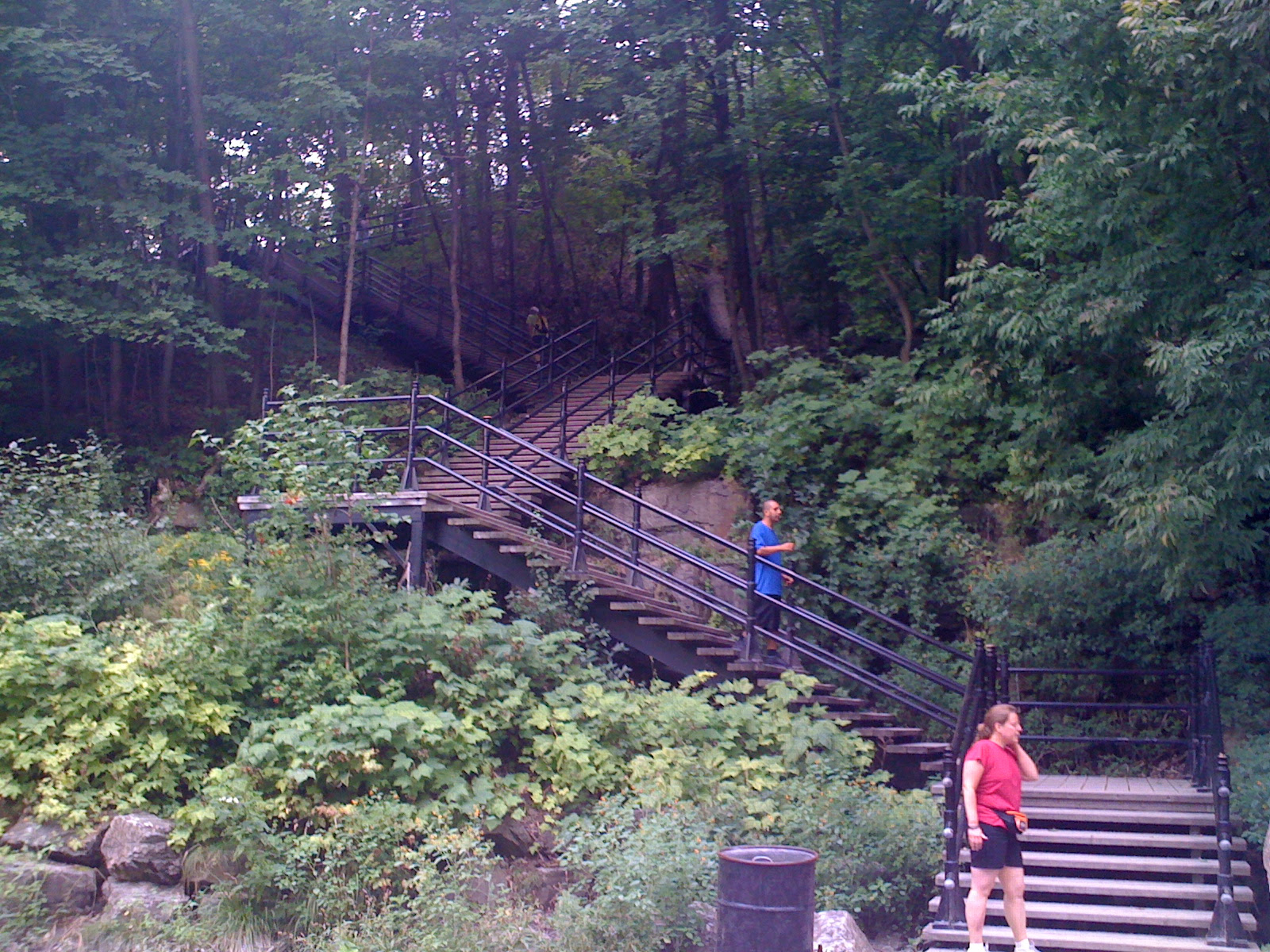 I completed a short walk through the park but it felt more like une randonnée or a hike because I was climbing a rather steep set of steps.  I hiked up from from Ave de Pins Ouest to the Chalet du Mont-Royal.  This is a very small portion of the 190-acre park whose plans were developed by Frederick Law Olmsted but not fully implemented when the park was inaugurated in 1876.  (Several websites including that of the park's nonprofit administrator Les Amis de la Montagne mention that the park was not designed completely to Olmsted's specifications.) 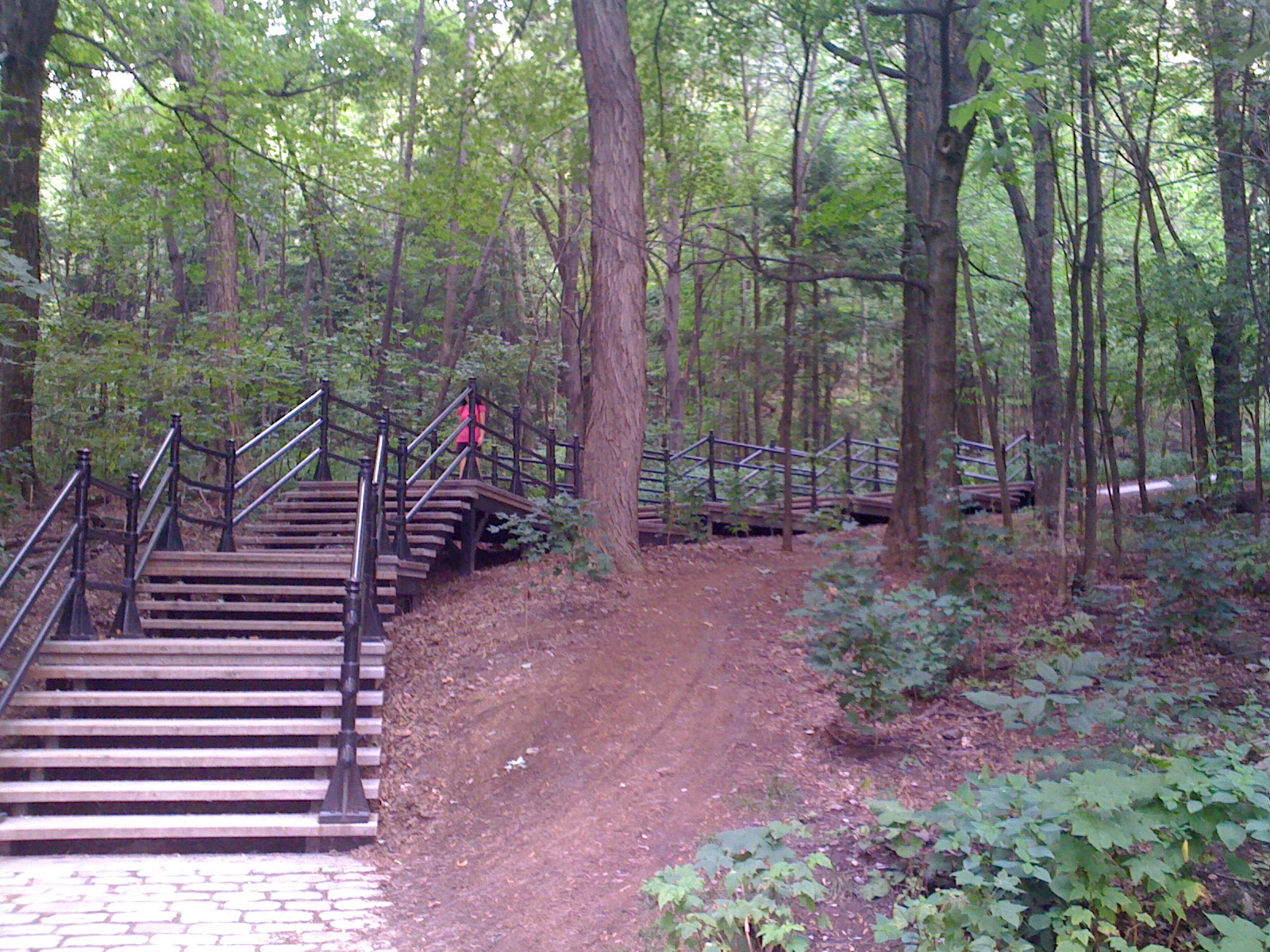 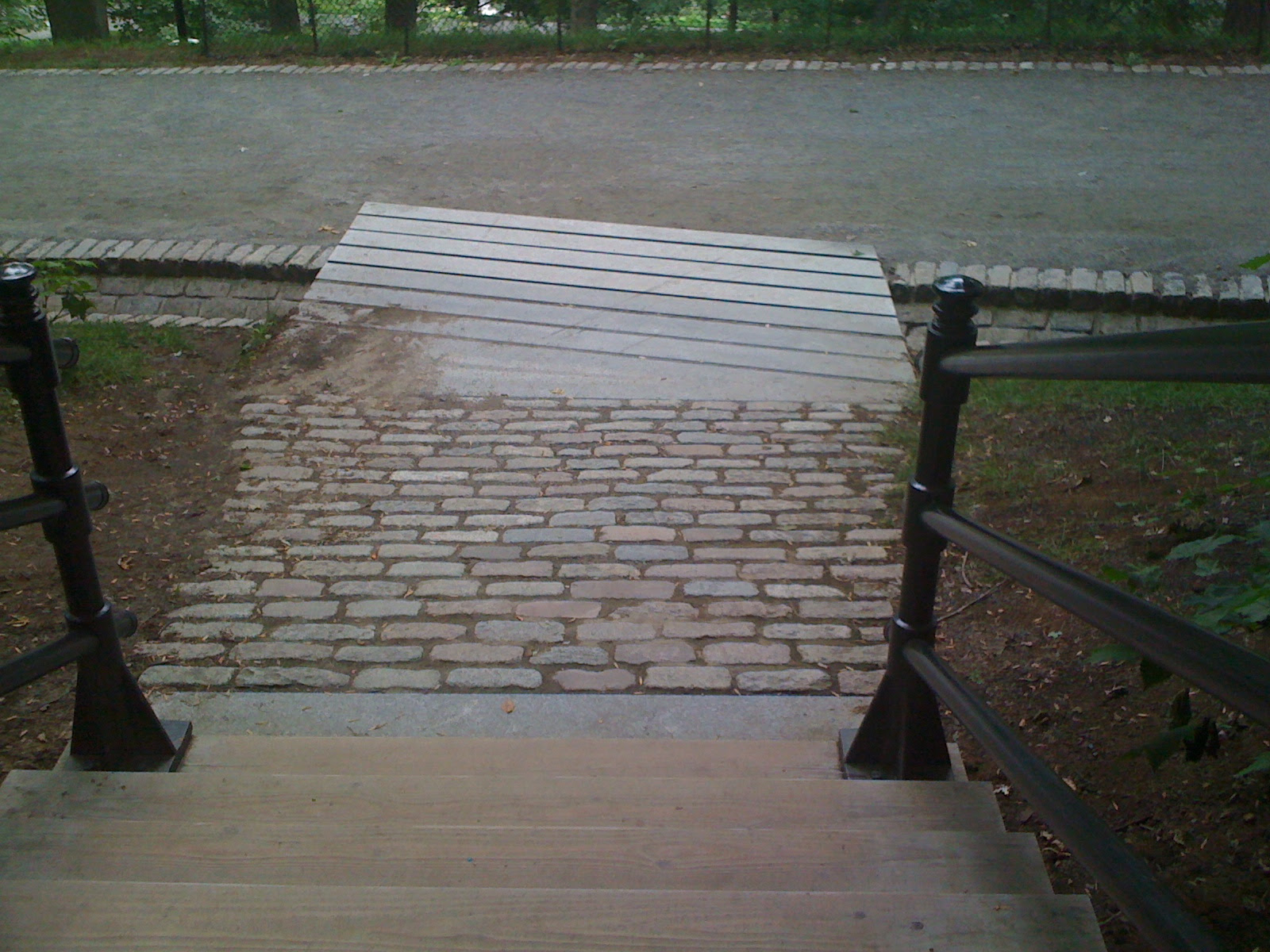 At the intersection of the Ave de Pins Ouest (and Peel) and the park you can see the beginning of the steps.  The steps are beautifully designed with wooden treads and black metal railings.  Several materials are used to signal the transitions between steps, drainage cover, path, and active roadway (bicycles and park vehicles mostly).  Most of the people I saw on the climb were using the steps and the pebbled incline as an exercise route, either walking briskly or jogging.  I even saw a man bicycle down a portion of the steps - audacieux!

In addition to people, I observed the vegetation along the incline.  At the base I saw a grove of black walnuts and a woman collecting many of the fallen fruit.  Bronwyn Chester of the blog Les promenades dans la Forêt Montréal says the black walnut is the symbolic tree of Quebec’s Le mois de l’arbre et des forêts which is celebrated on May 1. 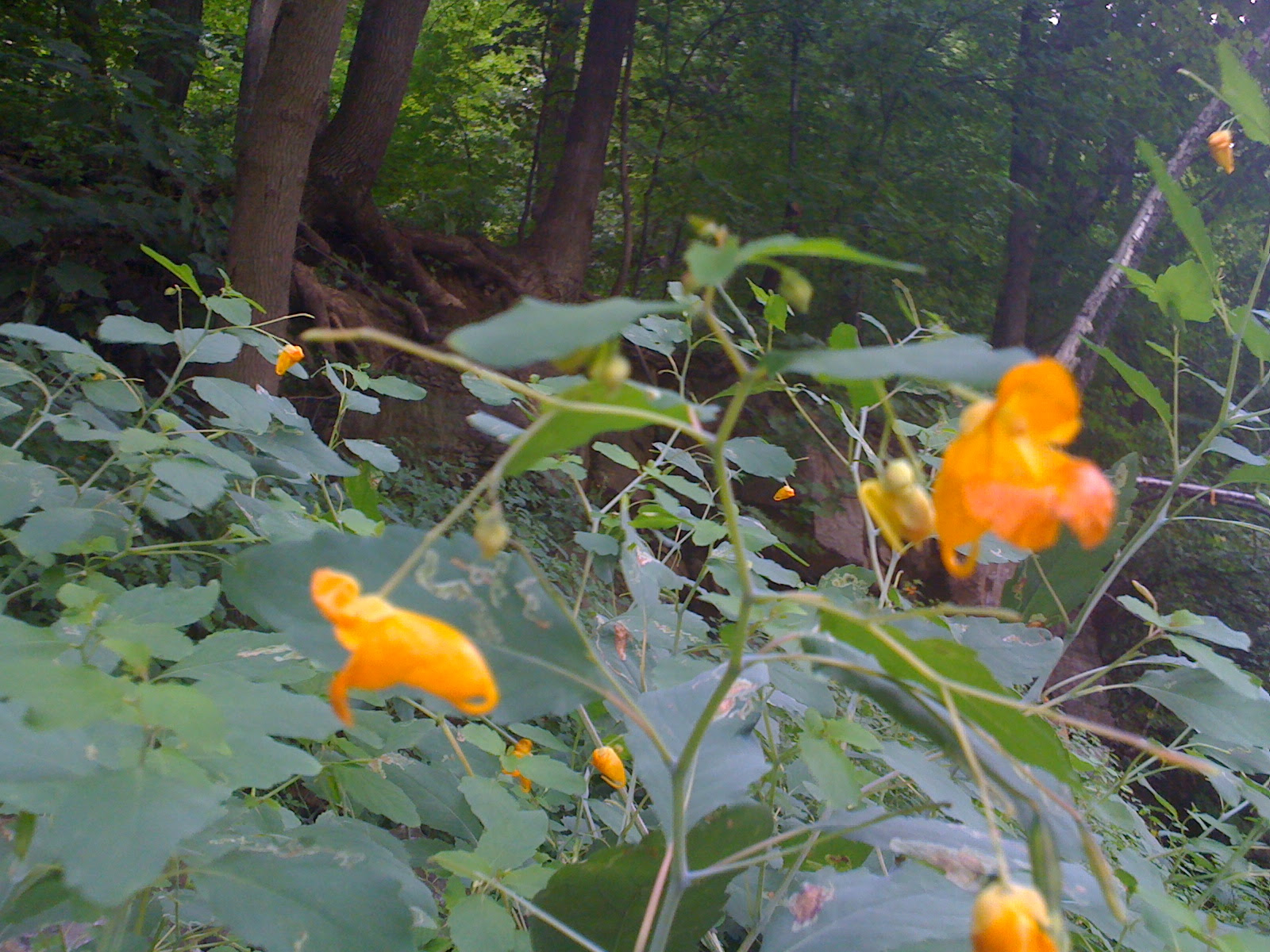 Further up I saw a beautiful herbaceous perennial (actually, I noticed the flower on my descent).  I do not know the species (pictured above).  Do you?  The flower looks like an orchid. 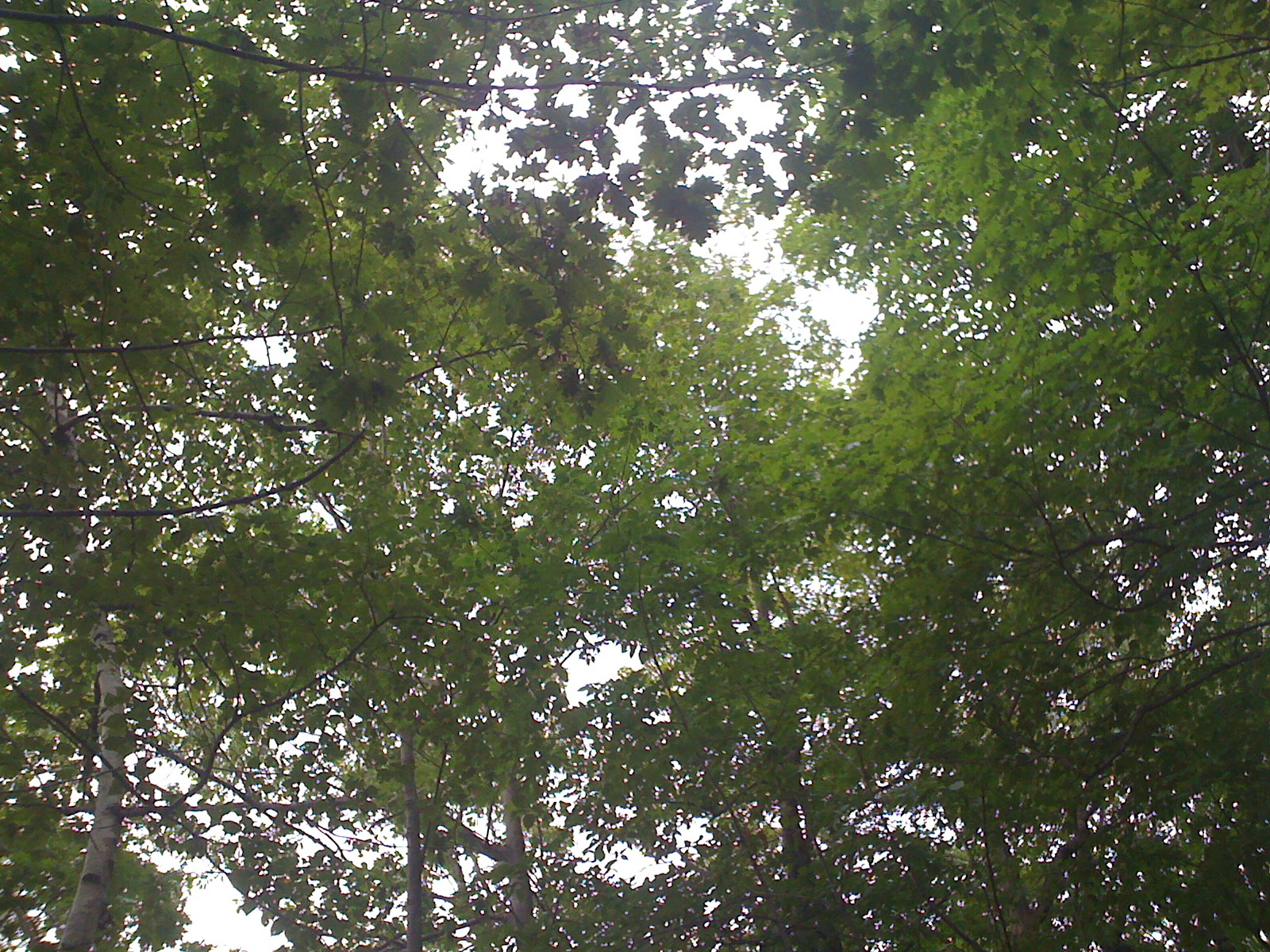 The overstory is populated with sugar maple, red oak, and birch under which grow hawthorn and dogwood.  I learned from Bronwyn Chester's blog that the park's historic vegetation is a sugar maple-bitternut hickory forest.  Therefore, in addition to the trees I saw, the summits and slopes of the park are populated by bitternut hickory and possibly other species typical of a Northern Mixed Hardwood forest such as butternut, ash, basswood, beech.  I also learned that volunteers with Les Amis de la Montagne plant serviceberry. 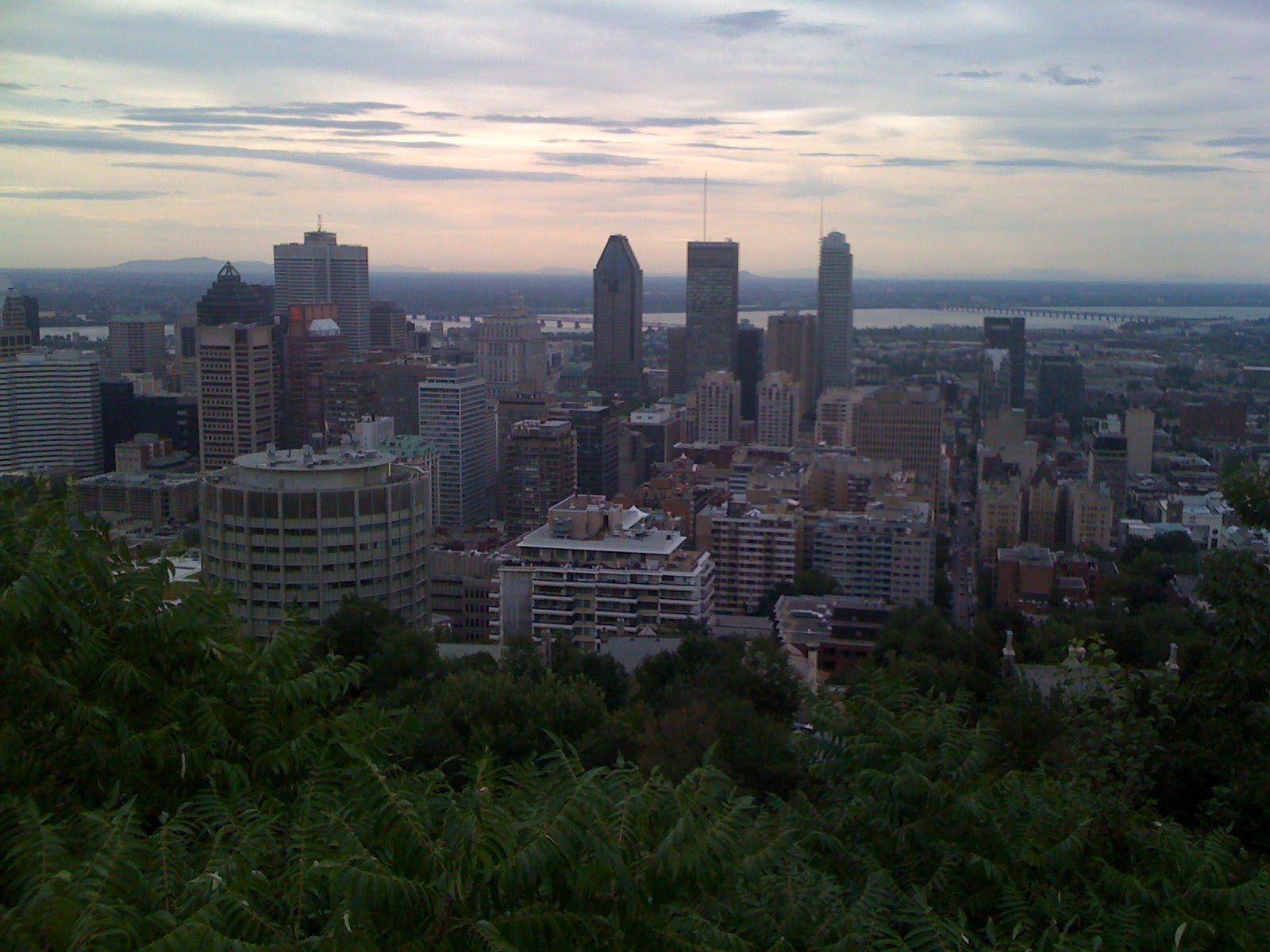 The view from two lookouts is impressive but limited in scope. The best view is from the plaza of the Chalet du Mont-Royal. It was an overcast, cool morning and the only camera I had was the one on my phone but I think the photographs above convey the amazing skyline view of downtown Montreal from this point in the park. 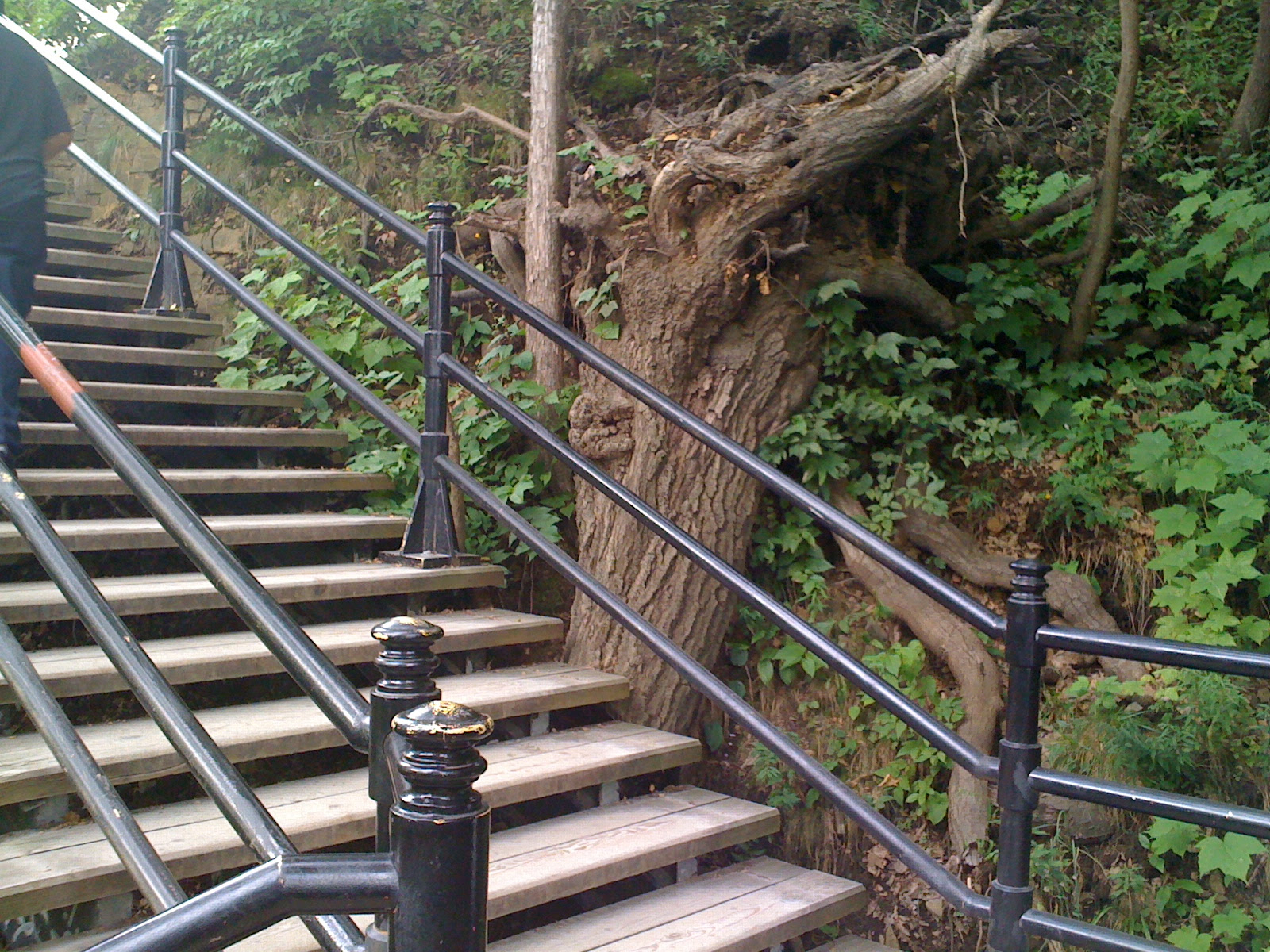 Another thing I noticed on the descent, about midway, was an uprooted tree adjacent to the steps. Two men and a boy wondered which came first: the upended tree or the steps. 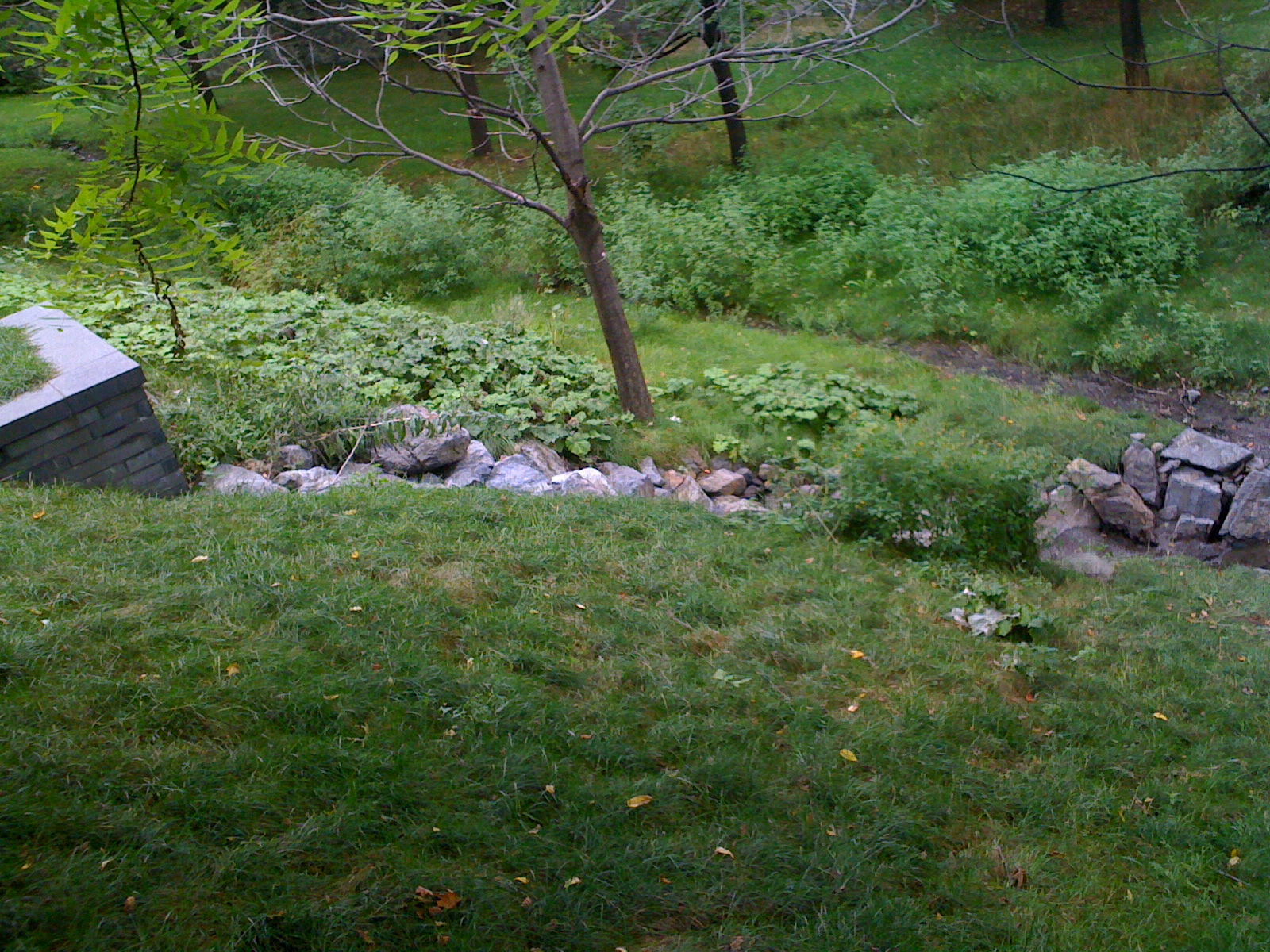 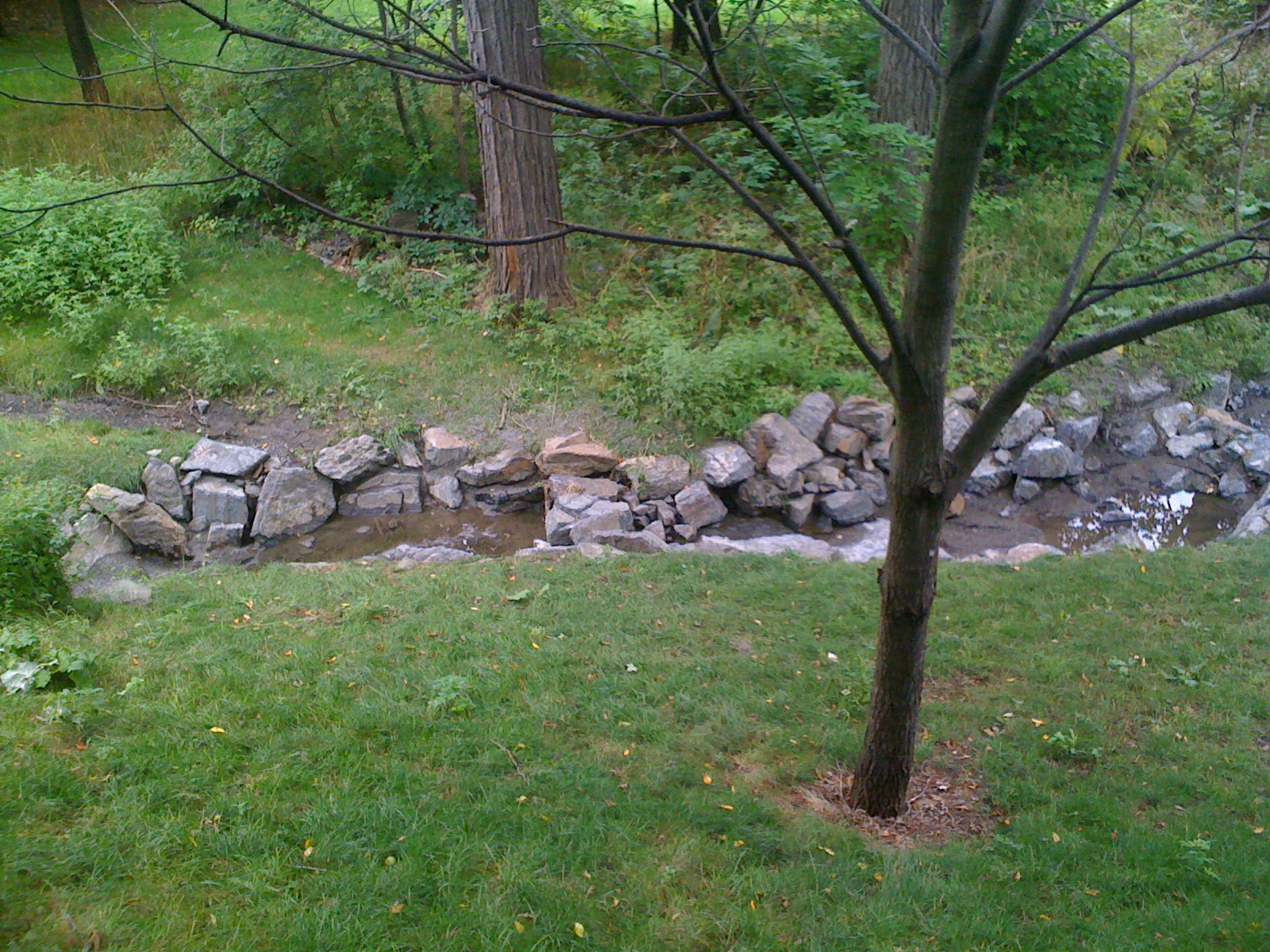 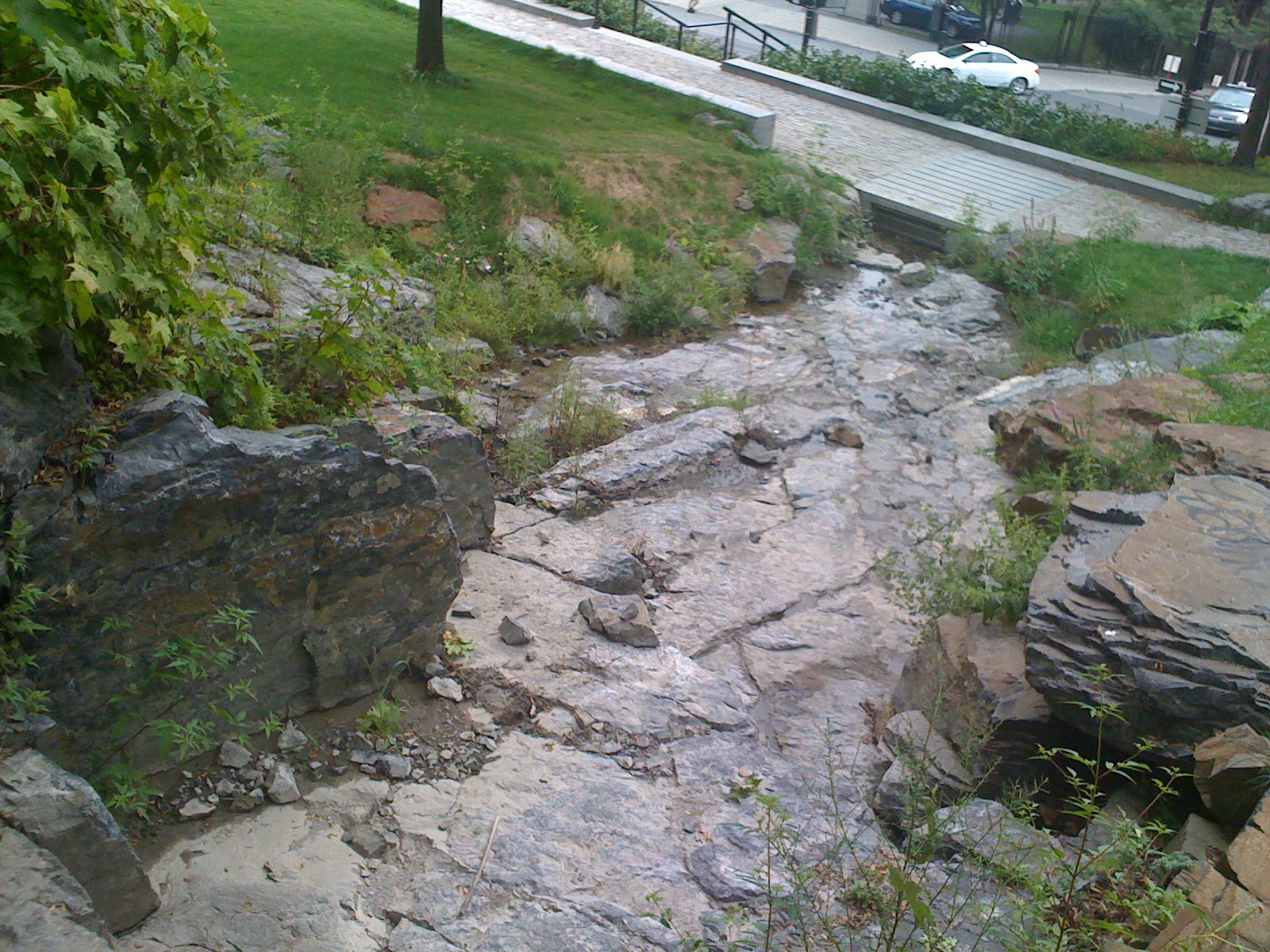 Heading back to Ave de Pins Ouest and Peel, I followed the cascade which was less than exuberant in late August.  I do not know the origin of the cascade but it ends in a concrete culvert.  The Under Montreal blog provides a sewer map of the city denoting former creeks, collector sewers, and interceptor sewers.  While it does not show a creek running though the park, there was a creek running east of the park off Ave de Pins Ouest. Limited time and poor shoe choice prevented me from walking Chemin Olmsted, but before descending I glanced up the road, one of the elements from the park's original plan.  I can imagine a  horse-drawn carriage gradually ascending the slope.

Do you have an Olmsted-designed park where you live?