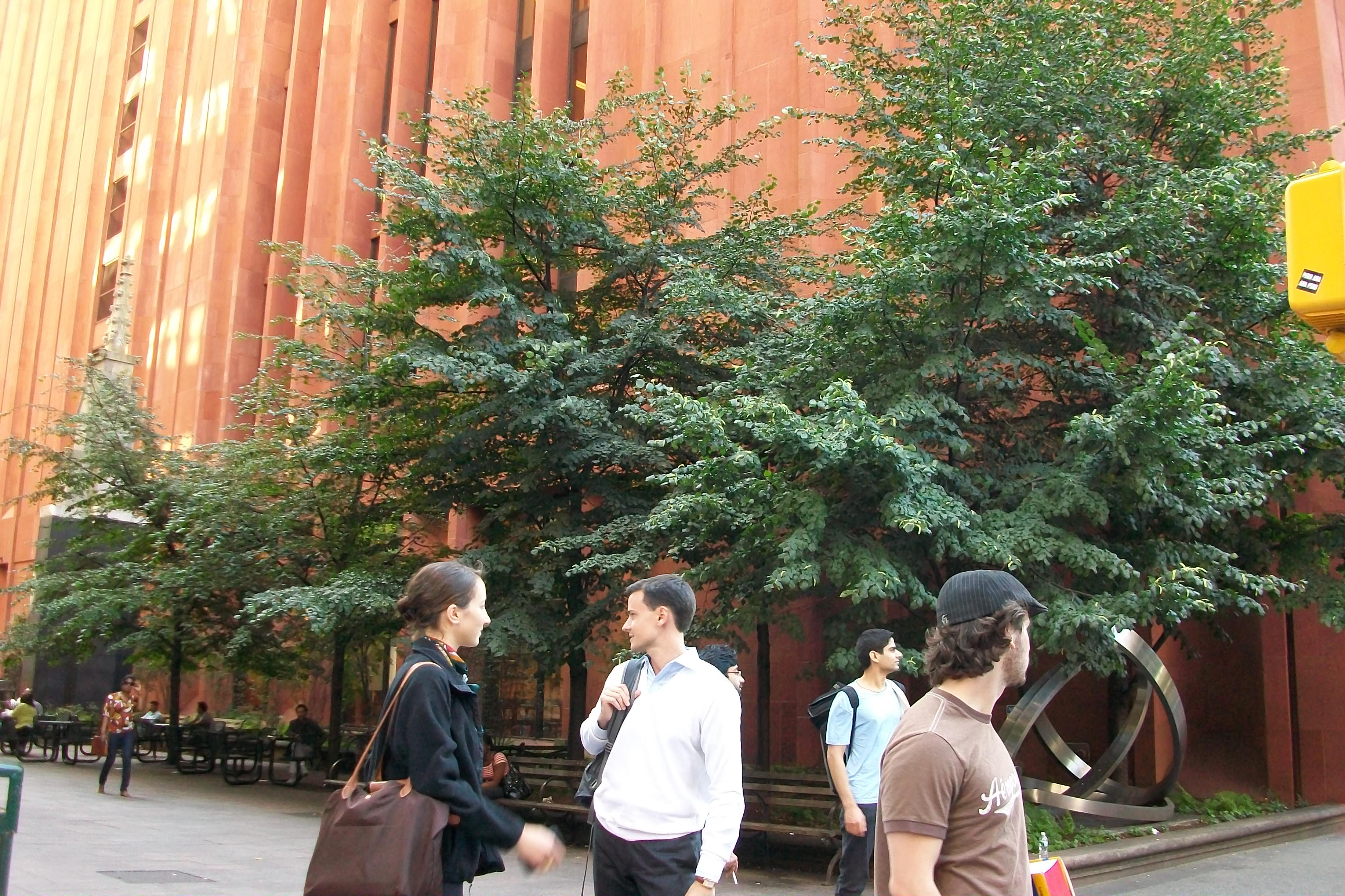 We reprinted on May 7, 2010 an NYU Alumni Magazine article about the university's "public" gardens including the Schwartz Plaza Native Woodland Garden.  The alumni magazine article reported 39 species growing in the 2200 square-foot garden such as ferns, sedge, wild ginger, and sarsaparilla.  Also growing in the garden were non-native trees like littleleaf linden (Tilia cordata), pictured above, Japanese maple (Acer palmatum), and Japanese pagoda tree (Styphnolobium japonicum). 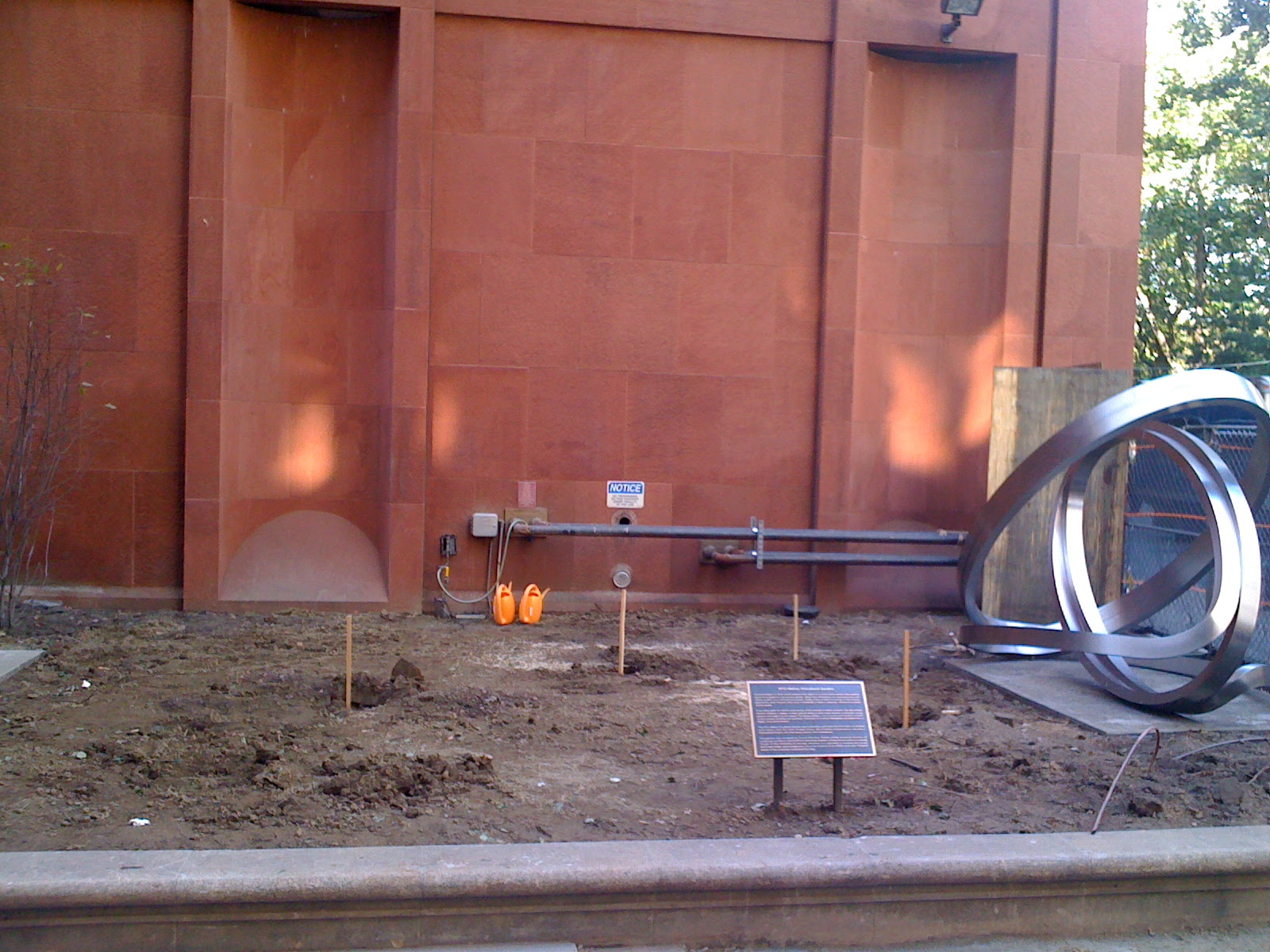 When we first saw the garden, several lindens rose above the fern and wild ginger understory in its northern section.  This fall the trees were removed to accommodate a construction project and were replaced this month with American hornbeam or Carpinus caroliana.  The species is described as


A handsome tree in many locations, the tree slowly reaches a height and spread of 20 to 30 feet.  It will grow with an attractive open habit in total shade, but be dense in full sun. The muscle-like bark is smooth, gray and fluted....The fall color is faintly orange to yellow and stands out in the landscape or woods in the fall. Brown leaves occasionally hang on the tree into the winter. 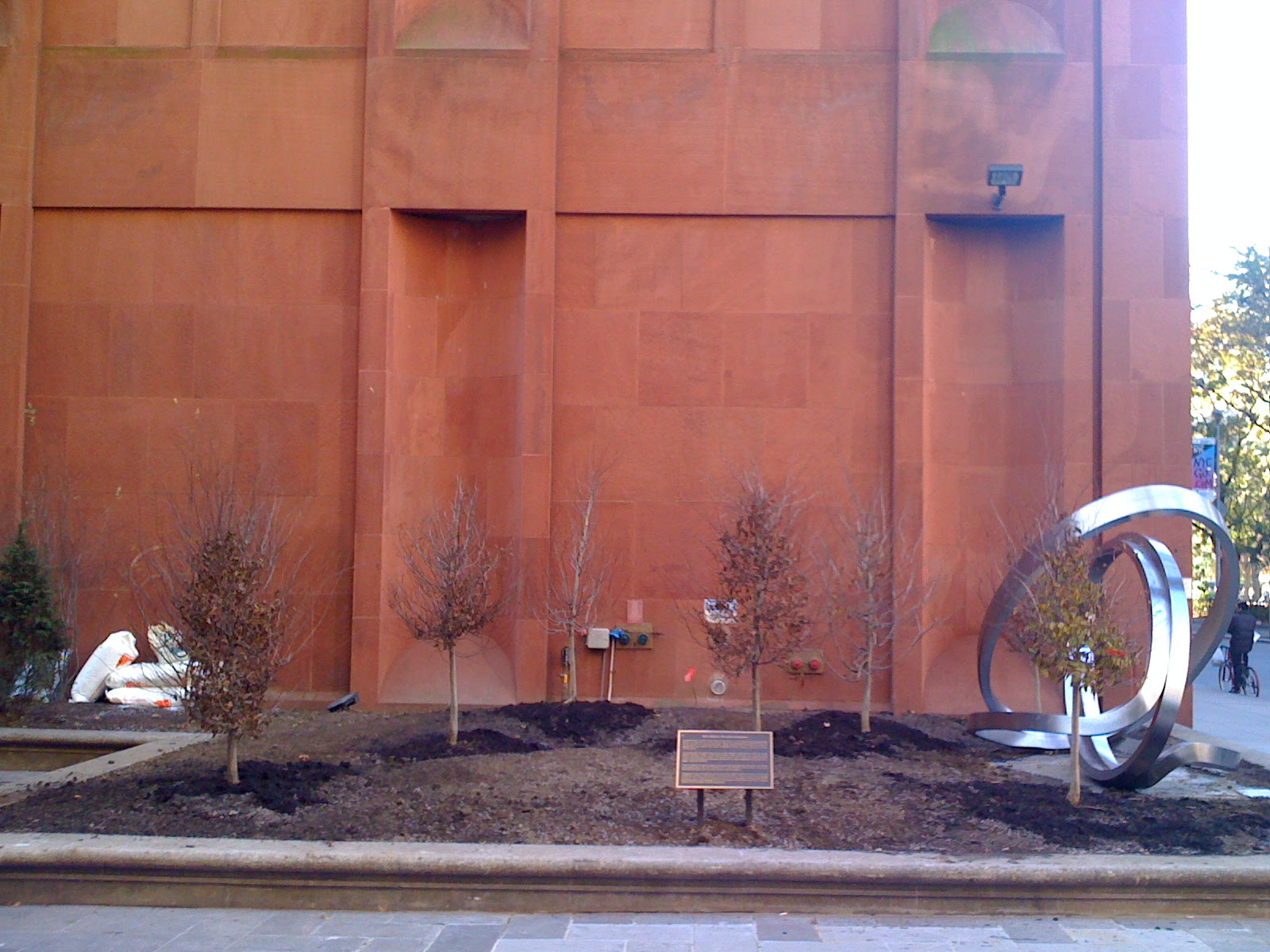 Native to the East Coast, the American hornbeam seems an appropriate addition to this garden which offers "a small, rare glimpse of the landscape that the Manahates might have known in 1609."  According to the USDA Natural Resources Conservation Service, American hornbeam has low-minor wildlife value.  The NRCS fact sheet for Carpinus caroliana is available at http://plants.usda.gov/factsheet/pdf/fs_caca18.pdf. 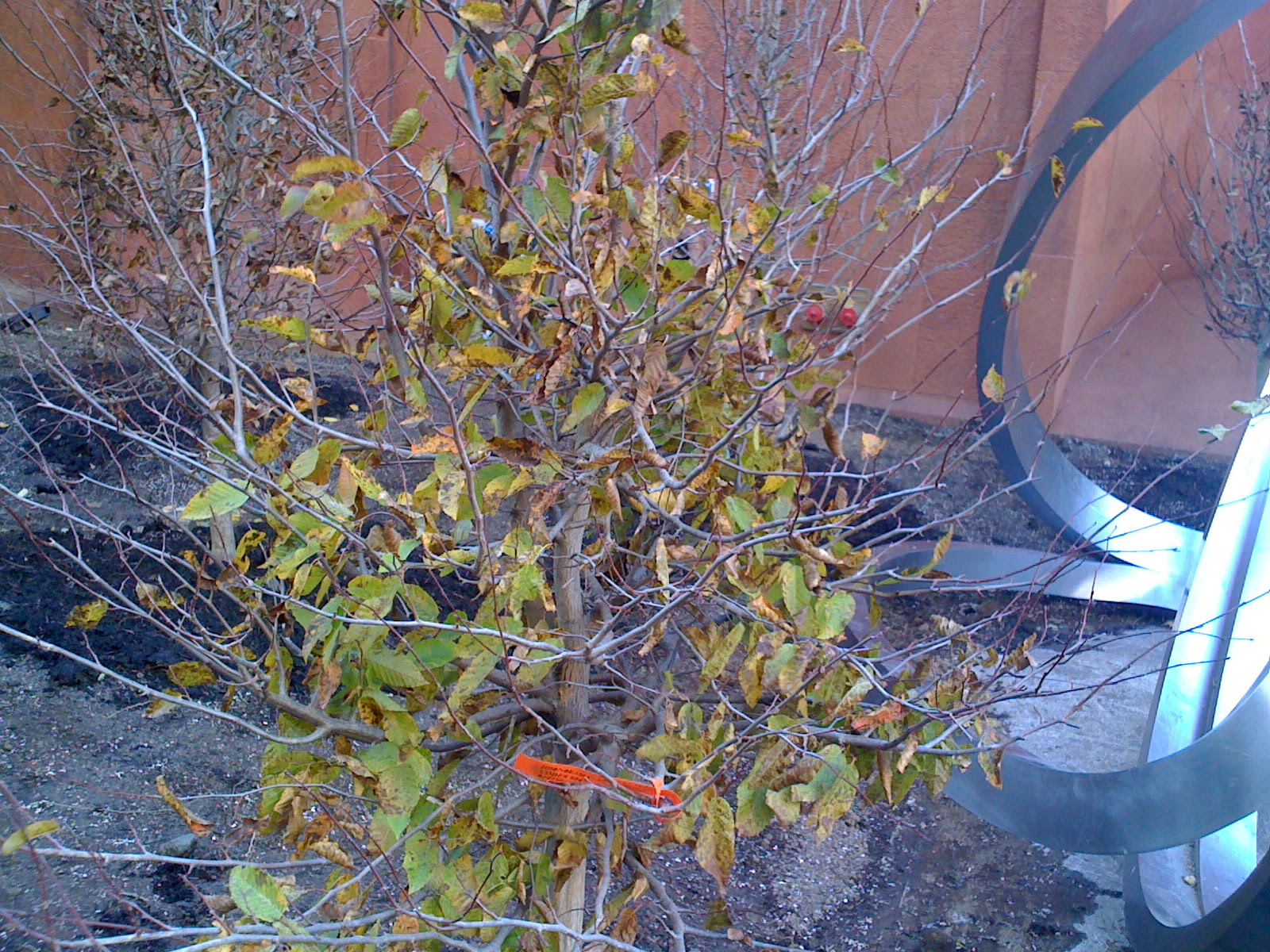 Although I did not notice this while the lindens were growing in the garden, the linden flowers are a major bee attractant which may be a drawback in this heavily populated area or the garden might have hosted some of the city's "new" bee species.   A few lindens remain in the plaza proper but I will miss the large massing of the species.

Have you seen the Time Landscape at LaGuardia Place and Houston Street? 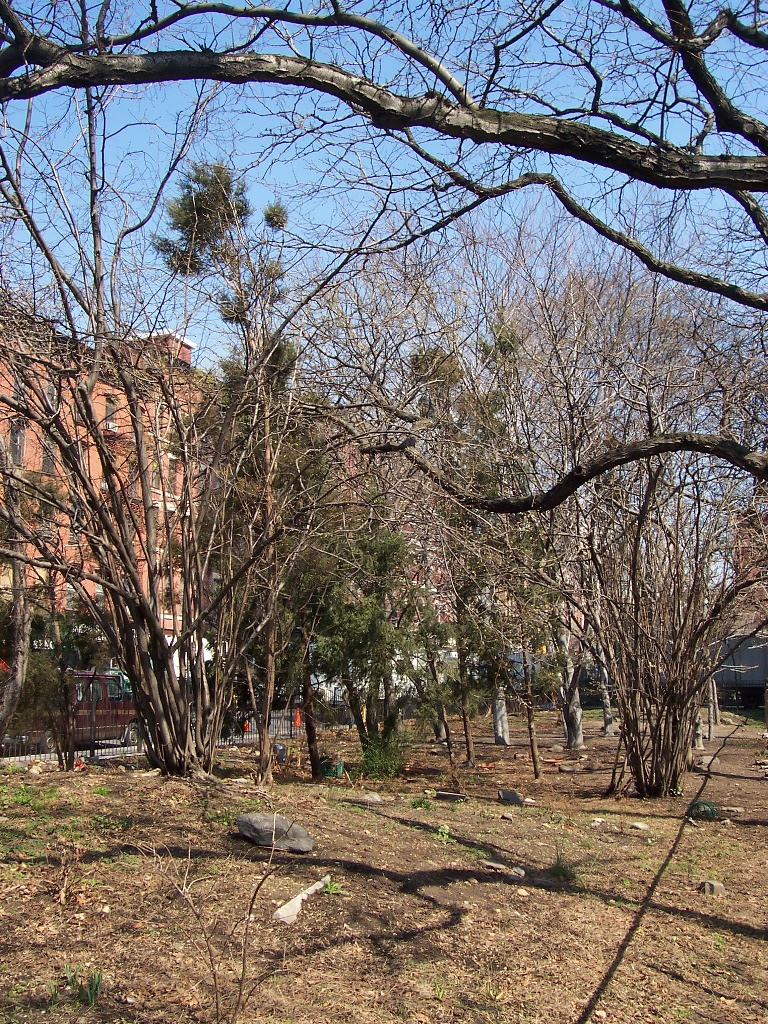 From the plaque posted at the park:


Landscape artist Alan Sonfist (1946- ) created Time Landscape as a living monument to the forest that once blanketed Manhattan Island. He proposed the project in 1965. After extensive research on New York’s botany, geology, and history Sonfist and local community members used a palette of native trees, shrubs, wild grasses, flowers, plants, rocks, and earth to plant the 25' x 40' rectangular plot at the northeast corner of La Guardia Place and West Houston Street in 1978. The result of their efforts is a slowly developing forest that represents the Manhattan landscape inhabited by Native Americans and encountered by Dutch settlers in the early 17th century. (source)