January 02, 2012
In the garden there is more than meets the eye.  An everyday space (your balcony garden), a once-in-a-lifetime icon (Monticello or Central Park), clever art (The Bagel Garden), or waspish gardening (Turkey Hill) are infused with ideas and practices about natural resources conservation, environmental theory, land use and management, social class and wealth, and politics, too, argues Wade Graham in American Eden: From Monticello to Central Park to Our Backyards: What Our Gardens Tell Us About Who We Are.  Graham situates the politics and ecology of garden design from 1600 to the 2000s in seven chapters.

The founding gardens of 1600-1826 were designed to obfuscate and to escape from the landscapes of production (whether slave- or factory-based) which fueled the lifestyles of the founding gardeners but plagued their moral compasses.  An extended quote from - the final paragraph of - Chapter One:


A man of the 18th century who embodied its ideals of natural science, exploration, and enlightenment, Jefferson prefigured the momentous, wrenching changes of the 19th: slavery, which tore his own conscience, would very nearly tear the country apart; factories, of which he was one of the first owners, would transform the nation's economy and social structure and feed the explosive growth of crowded, industrial cities--anathema to him and to millions of others who would point to his articulation of the agrarian ideal as they fled those cities to suburbs modeled on the image of the vanishing wilderness, tamed into manicured private gardens, each a miniature, simplified version of this vaster, layered one at Monticello.

Logically, in Chapter Two, Graham considers the garden landscapes of the suburbia between 1820 and 1890.  The story of the suburbs has been told by many scholars and typically close with the failing fortunes of the city.  Graham argues otherwise.


As cities spread and dominated their hinterlands, and the true agrarian countryside emptied of population as the small farm economy was replaced by factory farming, fear of the city had become a pervasive, basic element of the Victorian worldview....Once the city had decisively triumphed against the wilderness, modern pastoralism reclaimed the landscape, first in the form of the city park, bringing "country into the city, then reexporting this aestheticized wilderness ideal to the areas around cities, as garden suburbs, which were linked to the city by parkways--city streets turned into linear parks....In a few years the natural park idea was extended to the national park....This last development can be best understood not as the preservation of wilderness, since this was not the goal, but the designation of large tracts of scenic lands, cleared with guns of Indians and wolves, as resorts for public recreation--in essence city parks once removed from the city.  In other words, the advent of the national park marked the total triumph of the city over the wilderness.

Gardens and landscapes of the Gilded Age (1880-1915) and Arts & Crafts period (1850-1945) are discussed in Chapters Three and Four, respectively.  An exemplar of the former period is the White City for the Chicago World's Columbian Exposition, 1893.  In addition to classical idioms of design, cottage garden styles were also a dominant design motif in the Gilded Age.  Graham writes, "In a very real sense, Grandmother's garden was a political garden, an assertion of the common people in a time of increasing inequality and 'conspicuous consumption' by the rich...."


Although I have always associated Arts & Crafts design with the West Coast, a spectacular landscape thrives on the East Coast: Dumbarton Oaks in Georgetown was designed by Beatrix (Jones) Farrand between 1921 and 1947.   Farrand donated her estate to UC Berkeley.  Having lived in Berkeley I am familiar with Farrand's legacy as well as those of the designers profiled by Graham in Chapter Five on the modern California garden like Garrett Eckbo, Thomas Church, Lawrence Halprin, and others.  I was particularly struck by the description of designers and their work during the 1920s to the1960s as being imbued with social design principles.  This period is associated with numerous injustices which Graham does point out. 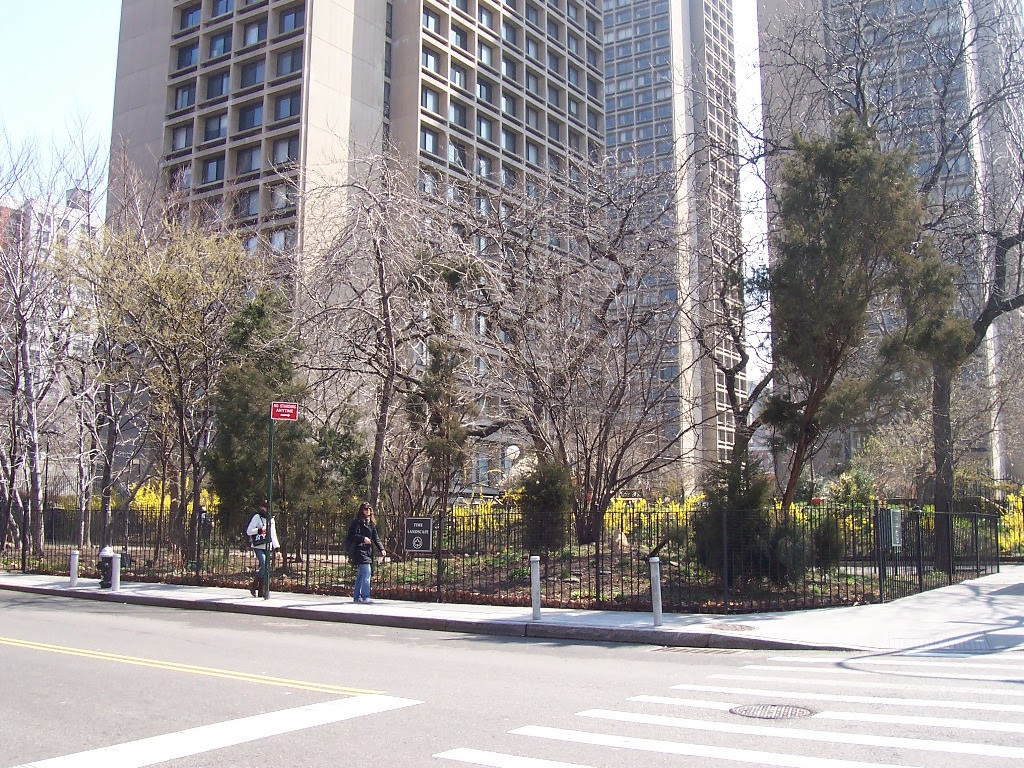 Conceptual landscape architecture between the 1940s and 2000s is the focus of Chapter Six.  Think Martha Schwartz's "The Bagel Garden," Robert Smithson's "Spiral Jetty," Richard Serra's "Spin Out (for Robert Smithson)," and though it is mentioned in the last chapter, "Time Landscape" by Alan Sonfist is one of my favorite pieces from the conceptual or land art period of landscape architecture.

Graham placed "Time Landscape" in the final chapter among the Lurie Garden (Millenium Park, Chicago) and the High Line (NYC) as well as Alice Waters Edible Schoolyards and the Obama White House kitchen garden.  Graham's description of the High Line as an example of "unprecedented naturalism in gardens and landscape" was striking because as I drafted this review, I read Genius of Place: The Life of Frederick Law Olmsted by Justin Martin.  In Genius of Place, Martin discussed the wetland restoration projects that Olmsted completed in Boston.  Those too were unprecedented but I understand Graham's argument.  Graham did not detail the founding of the High Line but the political ecology of its creation is reminiscent of Olmsted's lobbying for Central Park and many of his other projects.  Also, the White House kitchen garden did not spring from thin air; it can trace its origins to John Adams's vegetable garden.  Graham has brilliantly excavated the threads in landscape architectural practice.

I would like to thank Wade for providing a copy of American Eden for review.  For more essays by Wade Graham, follow his blog Reflections on Landscape.