Gems of the Greenwich Village superblocks

June 28, 2012
Inspired by Untapped New York's new weekly series titled "5 Spots in 5 Minutes", we'd like to share 7 gems you can see in 15 minutes on 2 blocks in Greenwich Village. 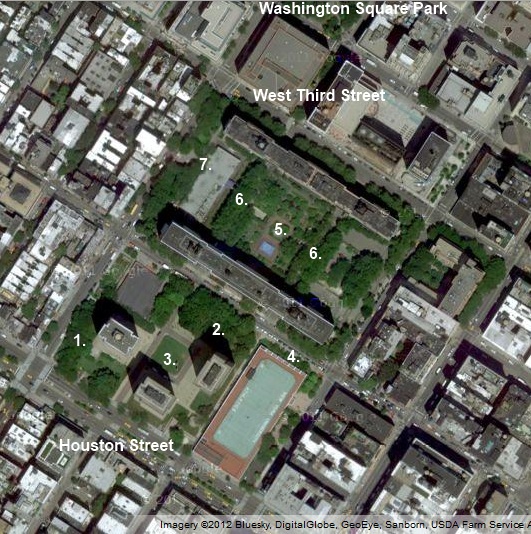 The Time Landscape park was created by landscape artist Alan Sonfist.  The landscape was proposed in 1956 "as a living monument to the forest that once blanketed Manhattan Island" prior to the arrival of Dutch settlers in the early 17th century.  Sonfist conducted "extensive research on New York’s botany, geology, and history."  The 25' x 40' forest park is composed of native trees, shrubs, wild grasses, flowers, plants, rocks, and earth.

The oak grove on Bleecker Street is composed of red and willow oaks. There are six willow oaks which are also known as peach oaks. Decaying tissue and mushrooms on two of the willow oaks indicate poor condition.  Two of the willow oaks are in poor condition: decaying tissue and mushrooms are visible.  The willow oak is an S1 listed species under the New York Natural Heritage Program (NYNHP) which means it is "endangered/critically imperiled in New York because of extreme rarity (typically 5 or fewer populations or very few remaining individuals) or is extremely vulnerable to extirpation from New York due to biological factors", but only naturally occurring individuals or populations are considered.  Unfortunately, for listing purposes, the willow oaks  in the grove on Bleecker Street were planted.

The concrete sculpture of Picasso’s 1954 “Sylvette” was created in 1970 by the Norwegian sculptor Carl Nesjar.  The sculpture sits in the central lawn of the Silver Towers residential complex.  The site was conferred landmark designation by the NYC Landmarks Preservation Commission in 2008.

Sakura is the Japanese word for "cherry blossoms."  In NYC, the Brooklyn Botanic Garden is famous for its sakura display in the spring.  Greenwich Village has a smaller but no less impressive sakura show on Bleecker Street.  Mark your calendar for 2013!

The Sasaki Garden is a 1.5 acre garden and green roof in the center of the block bounded by Bleecker, Laguardia, West Third, and Mercer.  The garden was designed by the firm Sasaki, Walker and Associates and completed in 1959.  Approximately 13 species of trees totaling 69 individual trees can be found in the garden.  At least twelve species of birds have been observed in the garden (Northern Cardinal, Mockingbird, Thrasher, Catbird, Mourning Dove, Pigeon, American Robin, Yellow-bellied Sapsucker, Hermit Thrush, Sparrow (House & White-throated) and European Starling) and additionally, at least three species of butterflies have been sighted in and/or near the garden: Red Admiral, American Lady, and Eastern Tiger Swallowtail.


(The garden is threatened by the NYU expansion plan.  You can learn more about the garden here.)

An allee is a straight way lined on both sides with trees.  The courtyard of Washington Square Village features two allées, one on either side of the Sasaki Garden, of 15+ inch diameter London planetrees.

This gem has been lost!  In the late 1990s, NYU filled in the walkway with a postal center thus eliminating a significant physical and visual access point to the Sasaki Garden.  The university also installed gates on either side of the commercial strip on Laguardia Place; these gates are permanently locked further prohibiting access from Laguardia Place to the Sasaki Garden. Don't miss the statue of former Mayor Fiorello La Guardia!

p.s. There is an 8th gem!  The Seed Labyrinth is on Laguardia Place between the community gardens and the Time Landscape.  We wrote about the labyrinth here.