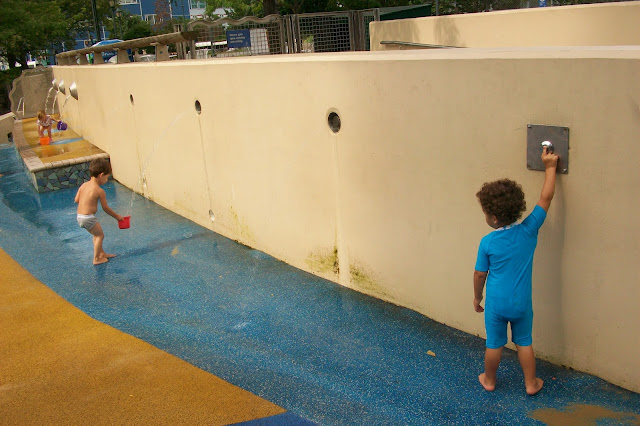 Playground water features use a lot of water!  According to a press release from NYC DEP and Parks, "[w]ithout timers and reactivation buttons, playground showers use approximately 7,000 gallons of water per day. Timers will reduce that consumption by 80%, or approximately 5,600 gallons per day."  The two agencies announced that the city would install timers and activation buttons on 23 by the end of this summer and on a total of 400 playgrounds by 2017.  The playground initiative is part of the Water for the Future program and will contribute to a 5% reduction in water use citywide.  The announcement was widely covered by the Times, NY1, DNAinfo, NY Daily News, Staten Island Advance, and Mommy Poppins.

The timers offer several co-benefits, too.  One, an activation button enables a child to control another aspect of her play and play space.  Two, the lull time between sprays -- sprinklers spray for two minutes -- provides a natural break in play.  Three, the lull time can also contribute to an element of surprise.  If you are standing next to an inactive jet and someone activates the spray, suddenly you are in a water joke or "giochi d’acqua" (aka water games).  Four, in the absence of constantly spraying water, there is more room for less-wet play.

The playground spray timers are a water-wise idea.  Is this happening in your community?