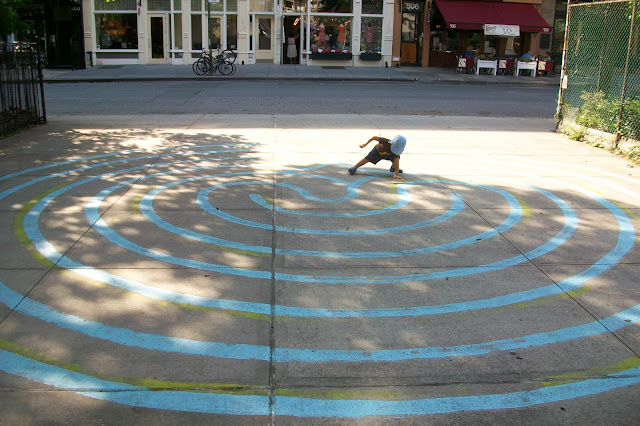 The Seed Labyrinth on Laguardia Place is another gem in Greenwich Village's superblocks.

The labyrinth was designed by Sara Jones for the NYCDOT Urban Art Program.  The labyrinth is an ancient symbol meant to cement the relationship between the natural world and art with just one path to the center of the maze and one path of return. The sidewalk on which it was painted is a crossroads of the community garden, the Time Landscape, and the massive sculpture entitled “Sylvette” by Pablo Picasso. Entering the Seed Labyrinth, one slows down taking notice of nature in this busy city.

Russell Bowes contributed a fantastic essay about labyrinths versus mazes to Human Flower Project in 2009 and I have edited my comment there below.

This Greenwich Village labyrinth is not my first experience with a labyrinth. The first labyrinth encounter I can recall was, like the one in NY, experienced with children. At Boston's Jamaica Pond I walked a labyrinth with youth participants in the Boston Urban Stewards program. I became familiar with two labyrinths in Berkeley - one real and the other conceptual. The former is a 35-foot diameter painted labyrinth at the Willard Middle School while the latter is "an 11-circuit labyrinth crafted of paving stones at a public and accessible site in Berkeley" both projects of the East Bay Labyrinth Project.  I walked an outline of the 11-circuit labyrinth at the Marina during an EBLP outreach event several years ago.

So, have you circuited a labyrinth?  Or a maze?