May 23, 2013
Angels Knoll is downtown Los Angeles was "made famous by the film 500 Days of Summer" though I did not recognize the park when I saw it for the first time in April.  Angels Knoll is composed of several components: the metro station, the newer Angels Knoll Plaza, the hillside park, and the historic funicular, Angels Flight, alongside which runs a stairway. 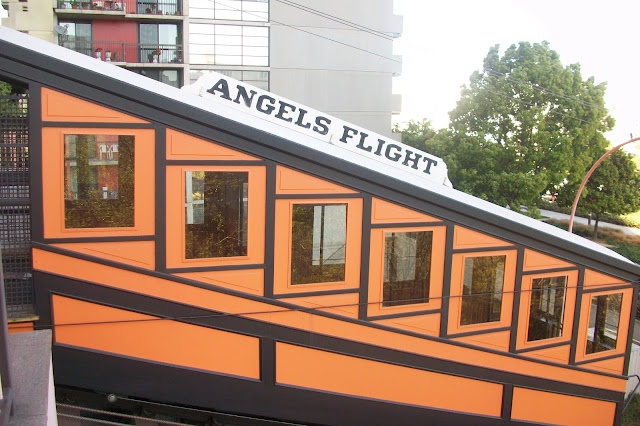 Angels Flight, the "shortest railway in the world" at 298 feet, was opened in 1901 between Third and Hill Streets and Bunker Hill, dismantled in 1969 to accommodate the Bunker Hill Urban Renewal Project,  but restored and re-opened in 1996 though one-half block from its original location.  I highly recommend the experience.  You can follow the cars - Olivet and Sanai - on Twitter.  Now the stairway. 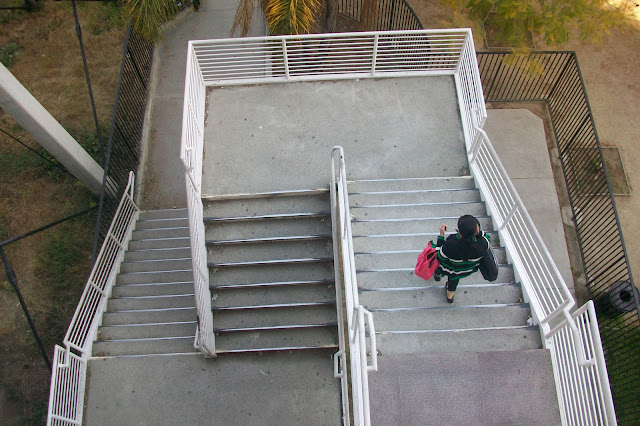 Surprisingly there are no details about the stairway online.  The photograph above shows the northern section of the stairway, looking down from California Plaza.  The upper section is designed in a switch-back style while much of the length of the stairway - from the upper portion of the park to South Olive - is straight.  I would like to know more about the design and installation of the Angels Knoll stairway.  If you have information please send it our way, thank you.