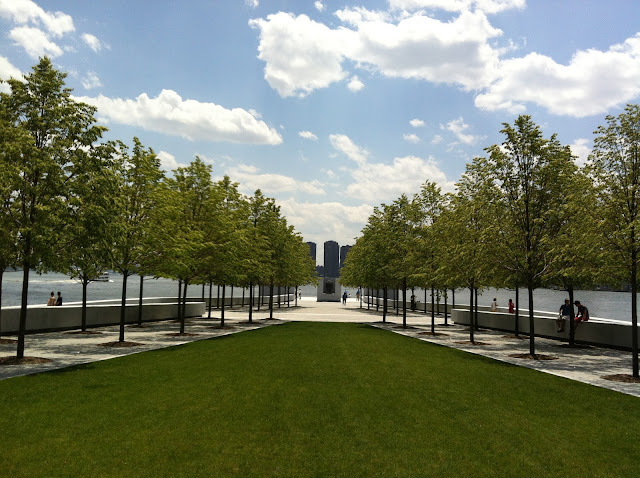 Beautiful weather last Saturday lured us to the FDR Four Freedoms Park on Roosevelt Island.  We traveled by subway to 59th Street then by tram over the East River to the island.  The Roosevelt Island Tramway is located at 60th Street and 2nd Avenue in the unassuming Tram Plaza.  (You can use your Metrocard to pay the fare.)  When we disembarked on the island we didn't immediately head to the park. 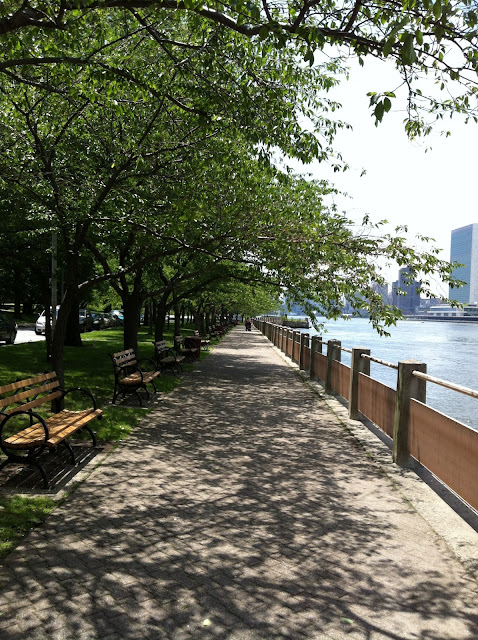 We strolled along the cherry walk which must be breathtaking in the spring.  We watched yachts leave wakes which broke against the rocky breakwater.  We saw a cormorant fishing and a duck swimming.  We observed ants while eating our packed lunch. 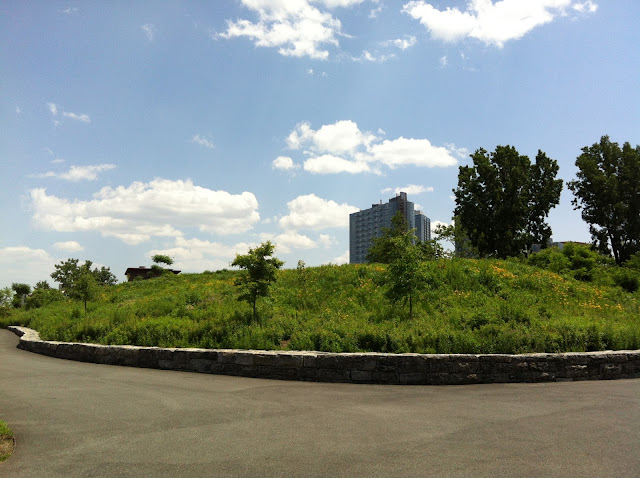 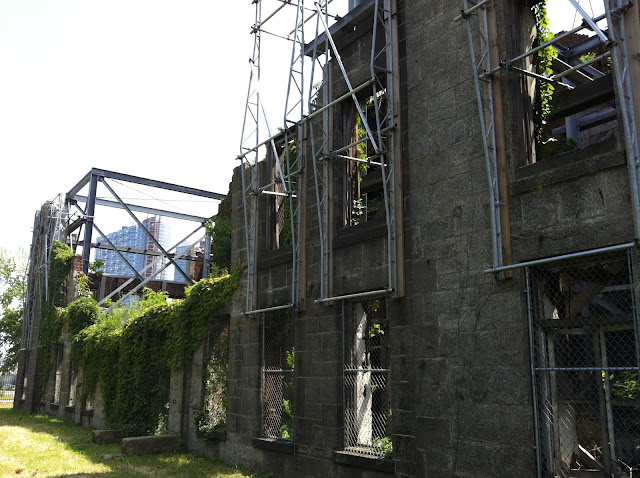 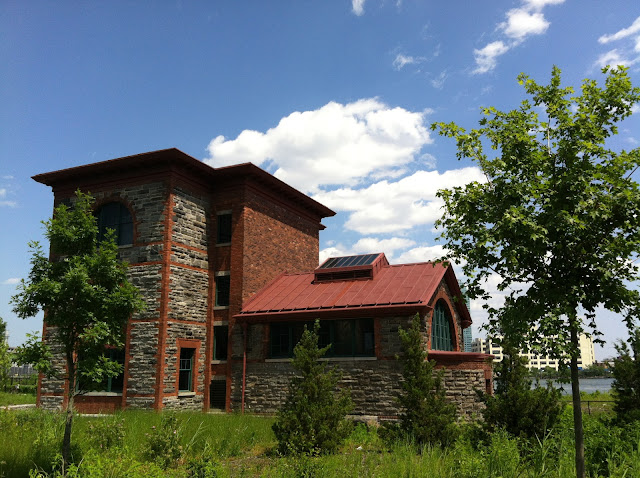 At the end of the cherry walk is South Point Park which has three striking features: a hilly meadow, the stabilized shell of the former Smallpox Hospital, and the former Strecker Memorial Laboratory. 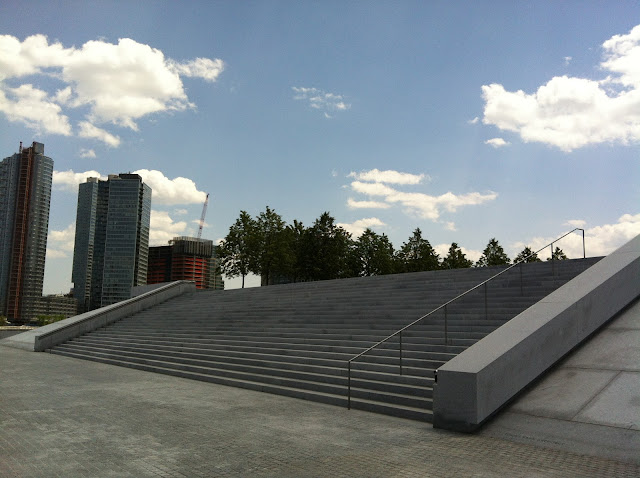 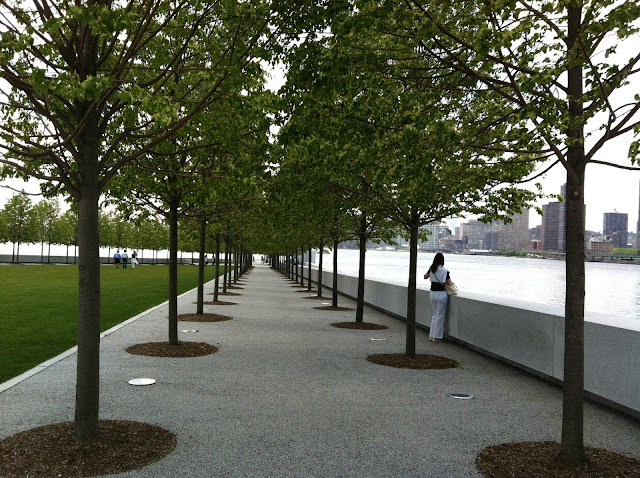 Whenever we leave the city heading north I stare at the park from the FDR so I was very excited to see it up close.  It is more striking standing among the 120 lindens, four beeches, and climbing the monumental granite steps.

Here is a long excerpt about Louis I. Kahn's design vision for the park:


Kahn's design makes perfect use of the triangular shape of the Park's site, emphasizing it, and employing what could be called a forced perspectival parti to draw and focus the visitor's gaze toward the colossal head of Roosevelt at the threshold to the 'Room.' Underlying Kahn's design is a naval theme, a nod, perhaps, to Roosevelt's love of and connection to the sea, and to the unique location of the site. The park design is symmetrical, and the construction drawings themselves are dimensioned off a centerline, as is standard in naval architecture. A sketch of an earlier iteration of the design shows a floating, tug and barge-like structure against the skyline of the city.  The final scheme acts as a prow to the island’s "boat." 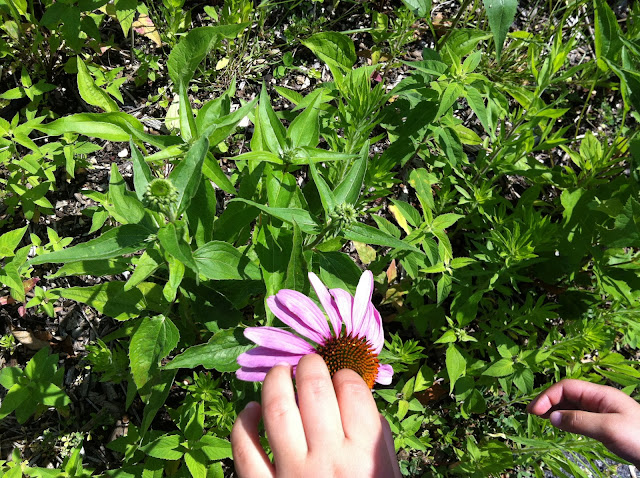 On our return to the tram, we walked on the east side of the hilly meadow.  We caught up with two bird watchers and observed Cedar waxwings, Northern mockingbirds, and European starlings.  Several small whites (sometimes called "cabbage moths") flew our way and the cones of the Echinacea felt like urchins!

Roosevelt Island is two miles long.  We only saw the southern third of the island including Goldwater Hospital.  The hospital's patients will be relocated as the site is the proposed home of the future Cornell NYC Tech.  We will return to the island; the trees of the FDR Four Freedoms Park will be gorgeous in the fall and we would like to visit the Blackwell Island Lighthouse at the northeastern tip of the island.

P.S. Untapped Cities has written about the park's construction here and here and about opening day.