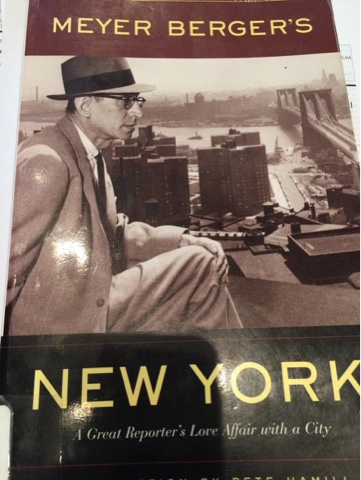 I was introduced to Meyer (Mike) Berger and his book New York by Eric Anderson. Eric is the illustrator of the fantastic pictorial of the natural inhabitants of Washington Square Park that was published in the NYU Alumni Magazine. New York is a collection of Mike Berger's columns for the Times. He wrote a couple of columns in which he referred to the Minetta Waters and the Minetta Brook. (Everything I've read about this body of water that flowed above ground in Washington Square Park refers to it as a brook but since the landscape was not particularly rugged, it might be more correct to call the waterbody a creek.) Mike also wrote about trees growing in the city. Here are some excerpts from the book. I am sure I've missed some; please let me know in the comments.

July 21, 1954
The men who nurse the city's 2,820,000 trees are in a sweat over the second year of drought in New York. Trees are dying in greater numbers than they have ever known, and there is not too much they can do about it....In Queens alone, for example, the Park [sic] Department looks after 940,000 in its parks, another 28,000 in the streets. Manhattan has 12,000 street trees, 170,000 in its parks. Brooklyn has 130,000 in parks, 105,000 on its streets, though people somehow have been misled by the book title "A Tree Grows in Brooklyn" into thinking it only has a few. The Bronx has 330,000 park trees...,and 45,000 on its streets....Trees that do best in New York's sidewalks are the pin, red and scarlet oaks; American and European elm, linden, Norway maple, honey locust, oriental plane, tulip and the ginkgo....Curiously, the city has more street and park trees today than it had, say, twenty-five or thirty years ago.


August 5, 1955
The two Glastonbury thorn trees in the [St Luke's Chapel] churchyard were brought from Britain by early communicants. The legend is that they were seedlings grown from thorn trees that branched from the staff thrust into graveyard soil at Benedictine Abbey in Old Glastonbury by St. Joseph of Arimathea.

February 5, 1958
Marginalia: A purist in town holds that the place name "Greenwich Village" is tautological. "Wich," he stubbornly maintains is borrowed from the Saxon "wic," which meant village.The Saxons stole "wic" from the Latin "vicus," which means pretty much the same. Green Village, the fussbudget argues, would be proper, but Greenwich Village really comes to Greenwich Village Village.

August 25, 1958
[Writing about the mid 1800s.] The lower Village still had the semi-bucolic look--sandy hills, marshes and glittering streams. Only a few years before, men had fished Minetta Brook for trout and had shot wild fowl in what is now Washington Square. Fourteenth Street was the city's northern boundary.