A Brief History of the Minetta Waters in Washington Square Park, 1797-1828 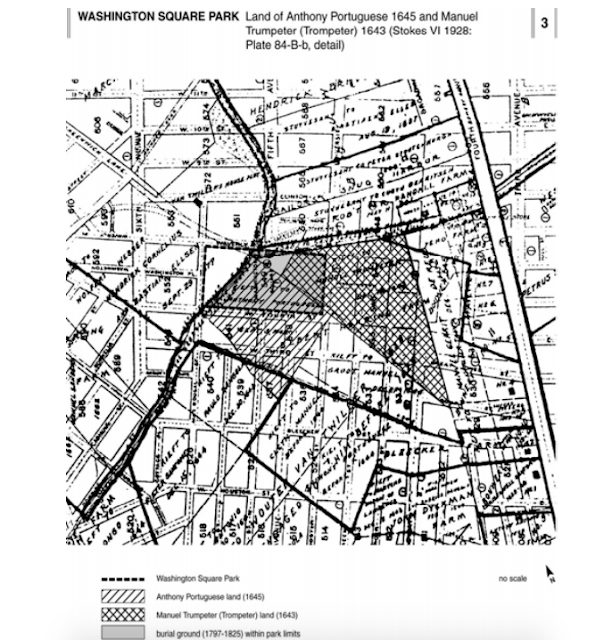 A brook or stream (or was it a creek) once flowed diagonally aboveground in what is now Washington Square Park. Historically, the waterbody was known as the Minetta Waters. Minetta flowed into the parkland west of the arch and exited the park at the southwestern corner -- at West 4th Street, east of MacDougal. Minetta formed the western boundary of the eventual burial ground. The waterbody supported a swamp up until the end of the 1700s. The land east of Minetta was acquired by the city in 1797 to establish a paupers' grave or Potter's Field aka a burial ground for poor and unknown people.

Upland meadow habitat was located in the northwestern and northeastern portions of the park, "on the relatively high ground above the 'valley' of the Minetta Waters." The area between Fifth Avenue and Waverly Place to University Place was once covered by a sand hill. 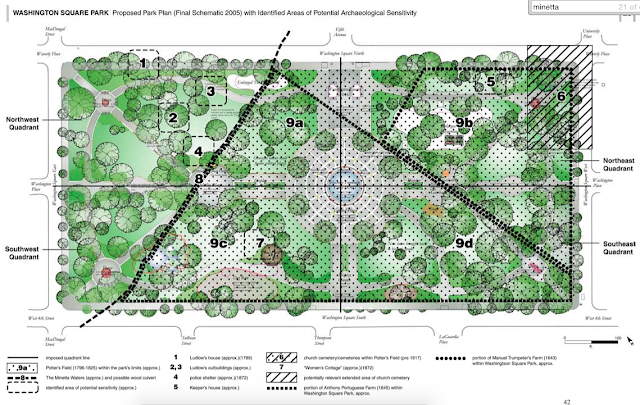 In 1808, the upland areas were levelled and the soil was used to fill in the swamp in order to create a burial ground. This intervention affected the eastern two-thirds of the park. (The western one-third of the current park was acquired between 1825 and 1828.) A drain was installed in 1819 to divert Minetta to the south of the burial ground. In 1823 and 1824, Minetta was deepened and culverted in a wooden sewer. The wooden culvert routed Minetta from the easter section of the site to west of the burial ground. By 1828, Minetta is completely culverted from the park to the Hudson River. In that same year, the burial ground becomes a park and is officially named Washington Square. A storm and sanitary sewer was transversely laid through the park sometime between 1880 and 1892. After the park's official founding, trees were planted in 1908 (81 young trees), 1911 (50 trees), 1913 (43 trees), and between 1934-1936. There was a major redesign of the park between 1934 and 1938 and again in the 1990s and 2000s.