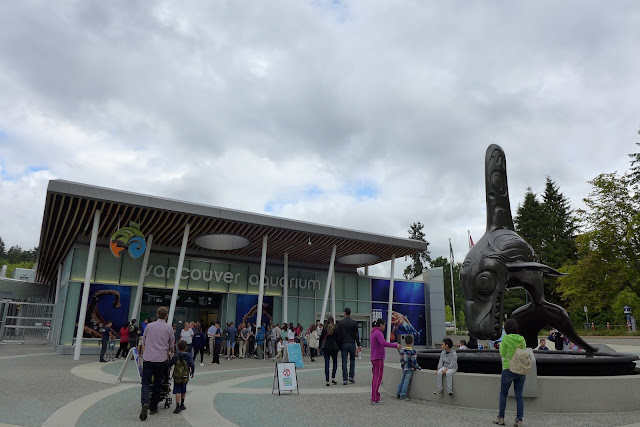 The Vancouver Aquarium was a treat! We are land and sea lovers (though two of us get queasy on boats) so it was a pleasure to stroll Stanley Park before and after seeing the sea life at the aquarium. 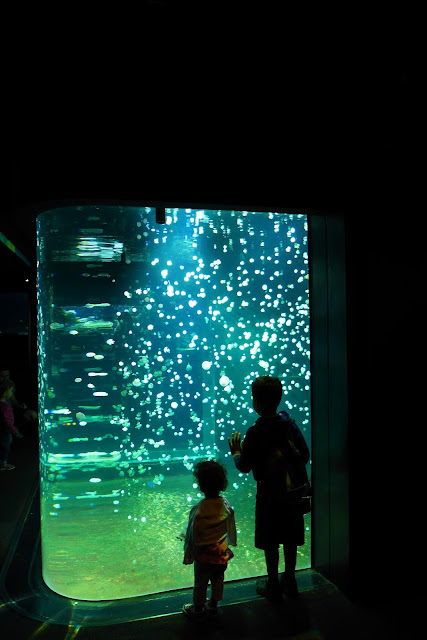 One of the highlights was the small jellies. It was mesmerizing to watch them propel their bodies, which are composed of mostly of water (96%), through the water. We made our visit at mid-morning to avoid crowds and we were rewarded with lots of hang time at all the tanks. 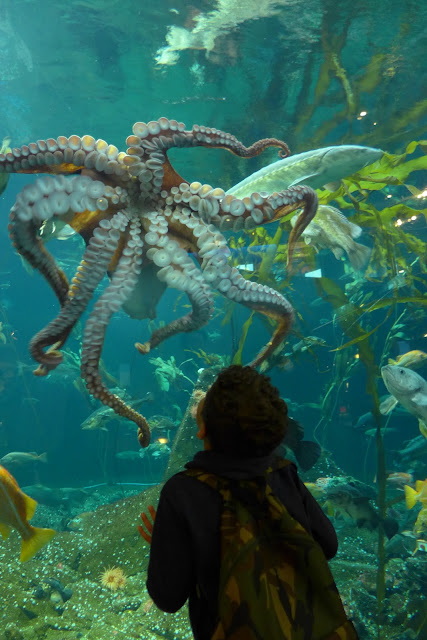 Can you tell that this octopus was fascinating?! 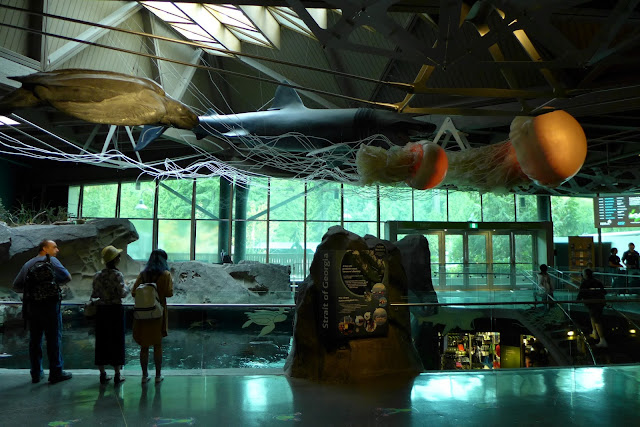 I like that the aquarium offers lots of ways to learn about the marine environment, both local (British Columbia) and far away. The aquarium has exhibits and galleries, shows, and activities, and staffed pop-up experiential displays. You can visit the aquarium in person or online via live cams and videos.  The Strait of Georgia exhibit in the Pacific Canada Pavilion was one of my favorites interior areas of the aquarium. 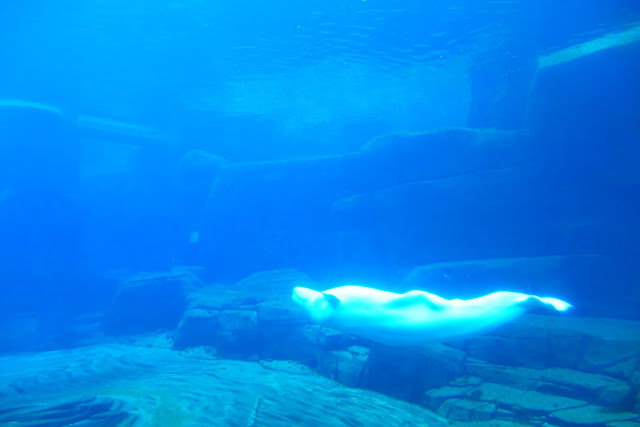 We didn't attend a live-animal show but we spent time watching the sea otters, penguins, and the ethereal beluga whales. (Find the beluga cam here.) It was synoptic to watch this large, milky-white creature move gracefully through the water. 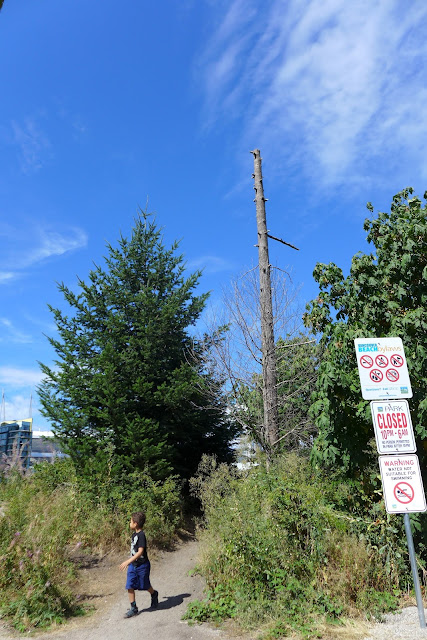 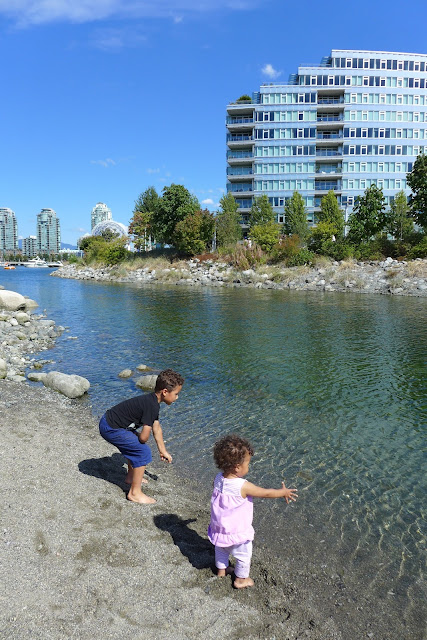 After the Aquarium we returned to our hotel to eat and to rest before our afternoon excursion to the Olympic Village. Actually, we went to see the Food Cart Fest. I am a tea drinker and wanted to visit the Amoda Tea cart at the festival. There we ate popsicles and drank iced matcha lemonades. The lines for the hot food carts were too long for our crew. After refreshing ourselves, we wandered over to the small man-made island in False Creek. Dogs are not allowed on the island as it was created to serve as a wildlife sanctuary. We spent time on the pebble beach watching a couple on the mainland fly a drone and throwing sand and pebbles into the creek. 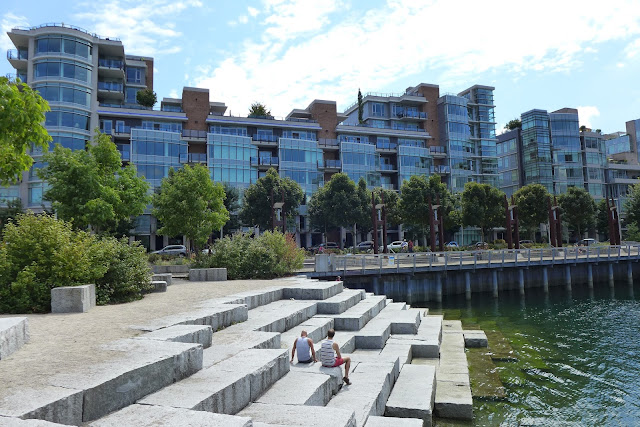 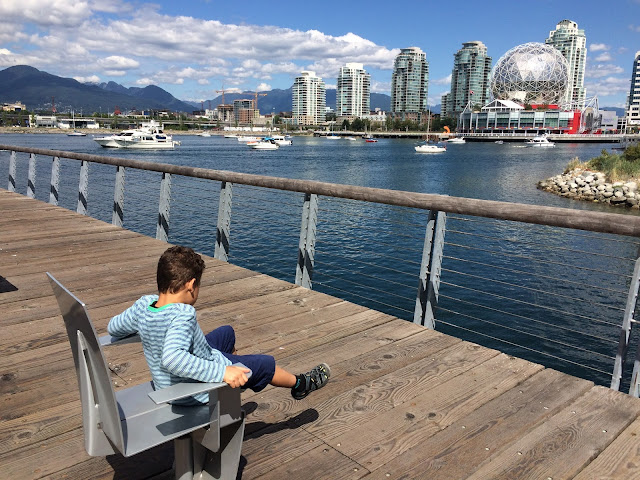 Between this end of False Creek and the Olympic Village SkyTrain station, we passed, obviously, the 2010 Olympic Village and the Telus Science World. We didn't explore either but we really liked a couple of the urban design feature of the Village such as the steps down to the water and the swivel seating on the boardwalk.

We were also fascinated by the audio-kinetic sculpture, Tower of Bauble, on the science museum's plaza. You can watch and listen to the sculpture here. We will have to return to Vancouver to give this museum its due. Read Day 1 here. And stay tuned for Day 3.