October 18, 2015
Travel is such an interesting state of mind. On the one hand, you want to do more where you are, while on the other, you are thinking about home and its comforts. We thoroughly enjoyed spending time with family in Whistler! However, we wanted to see a bit more of Vancouver and we knew that after Vancouver was home. (Well, one of us would have stayed in Whistler indefinitely, especially if a similar-aged cousin stayed, too.) 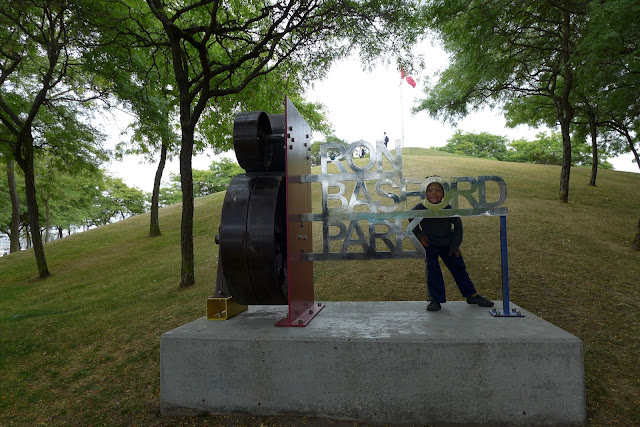 We drove unto Granville Island. We did not have a specific itinerary but I wanted to visit the Granville Island Public Market.  Our first stop was Ron Basford Park.  Ron Bamford was a long-serving Canadian Cabinet Minister, and accodring to Wikipedia entry, "he was known as "Mr. Granville Island" for his support of the Granville Island redevelopment project in Vancouver." The park was adjacent to where we parked and after a long drive we wanted to be outdoors. The hill in the center of the park also beckoned! 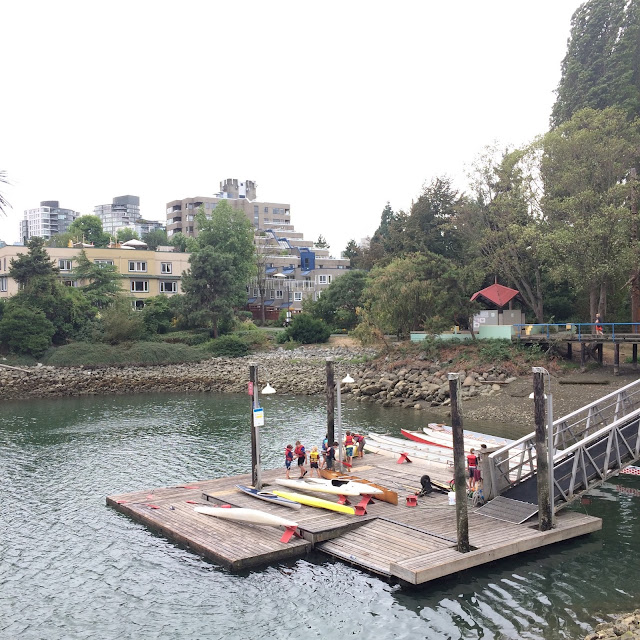 From there we walked along the water where we passed youth members of the 30-year old False Creek Racing Canoe Club. 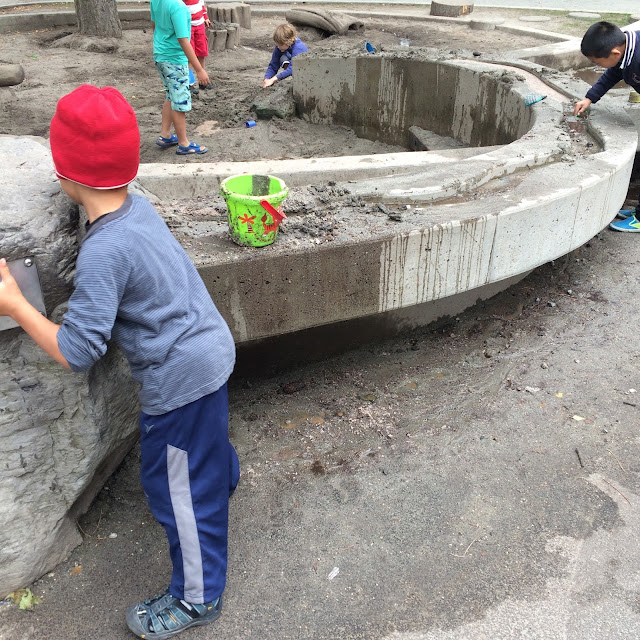 A small distance away from the launch was a playground. The day was overcast and cold but the playground was surprisingly lively. There were day campers, tourists, and residents. The sand play water feature was the most popular area of the playspace. With very cold hands, we made our way to Adventure Zone to continue playing in a warmer setting. Some of drank lemonade while others shopped. 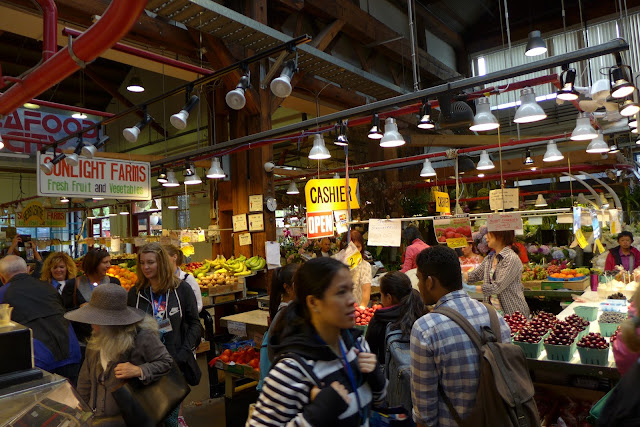 After exhausting our sillies and our Canadian dollars, we drove to the public market.  I think we did a good job of exploring the market. The highlights: tea from Granville Island Tea Company and honey sticks from Chilliwack River Valley Natural Honey, and from outside the market hall, a walk through of Fibre Art Studio. It was fascinating to watch the looming process! 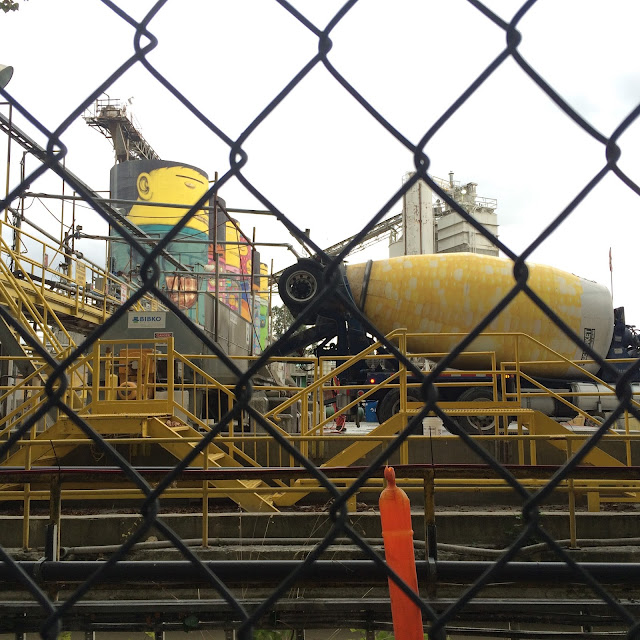 Just outside the studio we watched, through a fence, Ocean Concrete mixing trucks at work. We also spied Os Gemeos's mural painted on six concrete silos installed as part of the Vancouver Biennale 2014-2016. 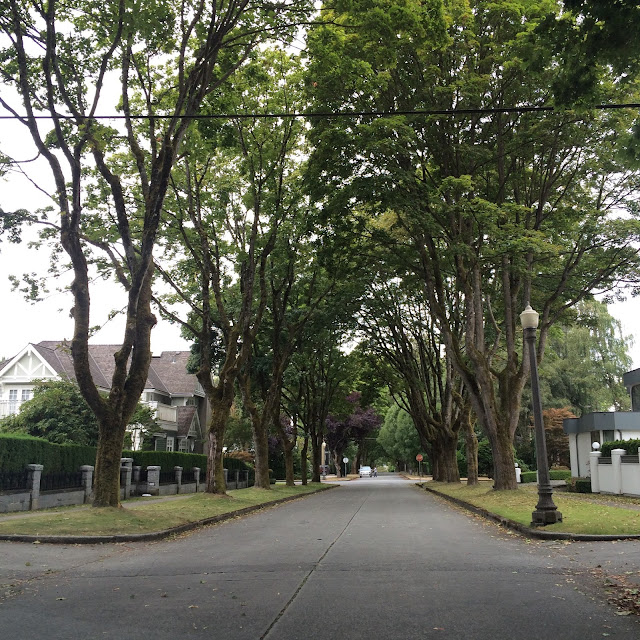 What happened next was a drive to the airport with a minor detour to look at tree-lined streets. 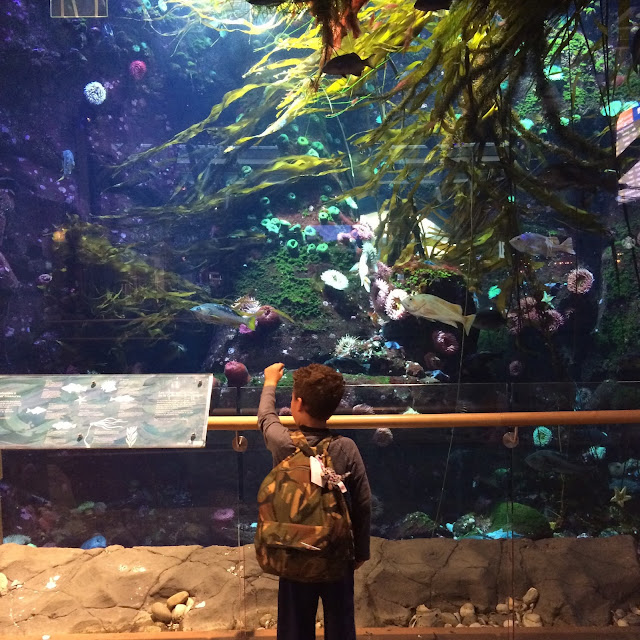 And we were so happy to see a bit of the Vancouver Aquarium at the airport! We think there will be a next time, Vancouver, so until then.