March 24, 2016
Two factors allowed me to volunteer at this year's meeting of the Sustainable Urban Forests Coalition (SUFC) held on March 17th. One was geography. The meeting was held in Arlington, VA, the county I am calling home this year. (The reception was held on March 16th in DC, which is a quick trip across the Potomac River.) Two was having the time to volunteer. I was able to secure an engaging childcare provider for the day of the meeting.

What was my role you ask? Since I am writing about the experience on my blog you might have guessed that I was asked to chronicle the event, and you would be right. I also live tweeted the meeting and parts of the reception. See everyone's tweets and 'grams in one place -- check out the meeting's Storify board -- Convening and Mobilizing a Network of Urban & Community Forestry Organizations. (If you were social about the event and your post or photo is not included on the Storify board, please let me know in the comments and I will update the board!)

The venue for the SUFC reception was the impressive U.S. Botanic Garden and its exhibit of orchids was our backdrop. The human stars of the reception were Congressman David Joyce of Ohio's 14th District and U.S. Forest Service Associate Chief Mary Wagner. Special mention was made of Representative Joyce's sponsorship of the reception. Both Chief Wagner spoke and Representative Joyce spoke passionately about the work of the Coalition and the urban and community forestry community and the state of urban forests. The Coalition honored its long-time former director Jennifer Judd Hinrichs; Jen was presented with a plaque made from a sustainably harvested sugar maple.

The reception was organized to maximize socializing with only a few short, formal presentations. The gathered group knows each other well so conversation came easily and lasted beyond the official end time of the reception. One guest I spoke with no longer has an affiliation with the Coalition but attended the reception to catch up with old friends. Newcomers, of which I was one, were eagerly welcomed into the fold. This is a down-to-earth group. Guests told stories of their introduction to urban forestry and shared nuggets about their current projects. Two individuals who both work for the same organization both first interned with the organization at age 15. The atmosphere in the garden was literally familial with family members of guests present. 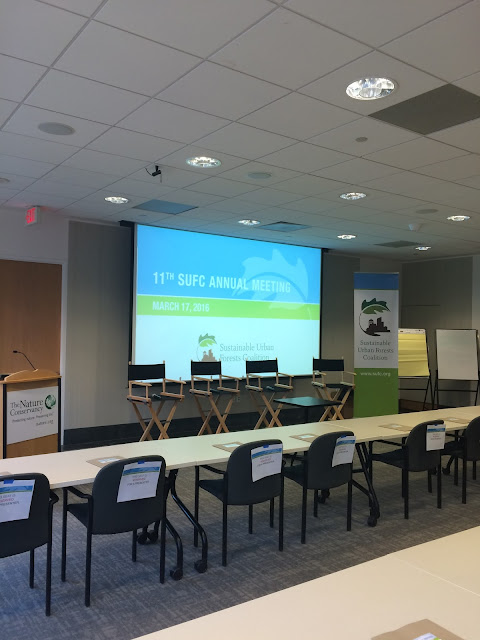 The next day the meeting switched venues to The Nature Conservancy (TNC) Headquarters in Arlington, VA. We learned from one of the first speakers of the morning, Joel Paque, Senior Policy Advisor, Global Cities, that TNC “walks the talk”. Before hearing Joel’s presentation, one of the first things I noticed upon arriving at the building was its proximity to Metro. The entrance to the Ballston Station shares plaza space with TNC. We learned from Joel that TNC sought LEED Gold recertification when it recently renovated its facility. One of the sustainable elements he highlighted was the native garden in the courtyard. He remarked that after having to explain the functional aesthetics of the garden do a friend who called it “ugly” he realized that the garden should have been located in the front of the building to face the city. The notion that undergirds TNC Cities program is that “we need to meet people where they live.” If you are not familiar with the often cited numbers on world population and cities, here is a statistic from the UN DESA: “54 per cent of the world’s population lives in urban areas, a proportion that is expected to increase to 66 per cent by 2050.” Joel outlined the strategic approaches TNC will take to make livable cities for nature and people. Briefly, they are (1) design cities with biodiversity in mind, (2) manage stormwater with green infrastructure and urban forests, (3) improve localized air quality by figuring out “how much nature is needed where”, and (4) support existing champions and nurture new environmental leaders.

The Global Cities presentation was one of the highlights of meeting. It was educational and inspirational to hear about the Coalition’s strategic planning process and to review many of the outcomes. One piece of the process that struck me was the mission statement. It is not easy to craft a mission statement. This one was approved after more than 500 revisions! Following a discussion of the strategic plan, Coalition working groups shared their progress on policy (i.e. federal appropriations), urban forest research and development, strategic engagement and outreach (formerly communications), funding stream diversity, and partnerships among Coalition members. I was impressed by the dedication of each individual not only to his or her member organization but also to the actual work of the Coalition.

Another highlight from the morning was watching the trailer of the film Trees in Trouble by Andrea Torrice who was present to introduce the documentary. PBS has picked up the film, which is great news for Andrea and for the urban forestry community. Based on the trailer, the film is a compelling message piece for thoughtful stewardship of our urban forests. There was another filmmaker among the attendees – Ross Spears of The Truth about Trees. If you don’t already, follow this phenomenal project on any number of social media channels. With all this talk about tree films, coincidentally, City of Trees, a film about the implementation and impacts of a DC green jobs organization with involvement by Monica Lear of the USFS, a Coalition member organization, is being shown in this year’s DC Environmental Film Festival happening now (March 15-26).

That was just the morning session! 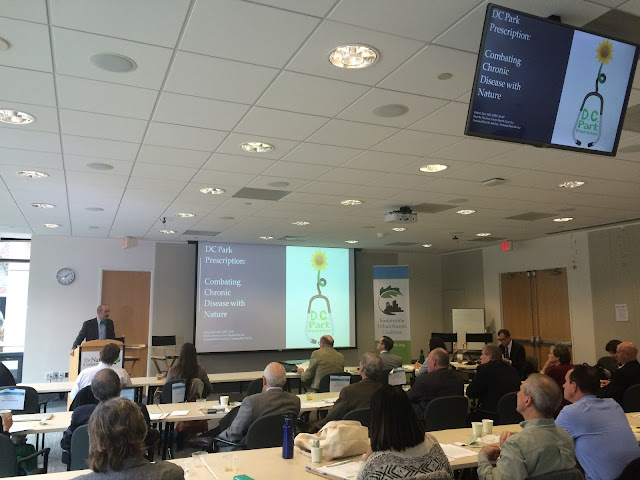 After lunch, the meeting resumed with keynote speaker was Robert Zarr, MD MPH FAAP, founder of DC Parks Rx. Participating physicians prescribe time in nature. In my mind, the two most striking statements made by Dr. Zarr were (1) chronic disease plus poverty plus low levels of activity equal early deaths and a serious financial burden on our healthcare system and (2) prescribing moving, outside, in the presence of trees does improve physiological and mental health. 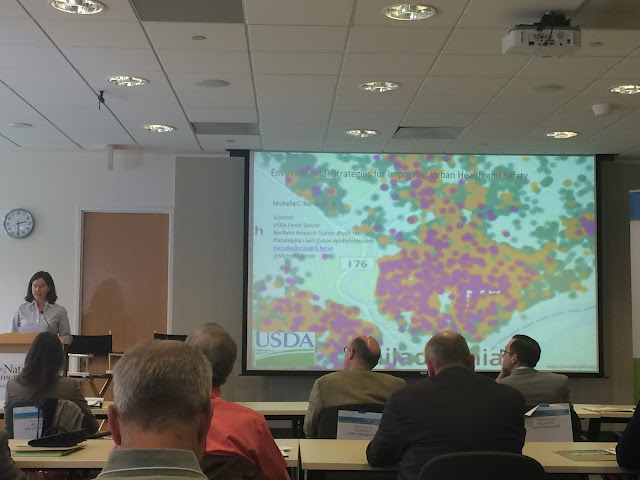 The afternoon panelists followed Robert Zarr’s presentation. Gary Belan of American Rivers spoke about the role of urban forests in providing clean water supplies. He described the installation of green stormwater infrastructure as “pok[ing] more holes in the hard cover” of cities. A particularly fascinating slide was of the re-creation of historic natural hydrology; in Chicago, green infrastructure vis-à-vis street tree planting is paralleling sewers, which are former streambeds! The third panelist was Michelle Kondo, a social science researcher with the US Forest Service Urban Field Station in Philadelphia. Her research is very exciting. Michelle is using epidemiological methodologies to evaluate the effects of nature-based interventions on health and safety in under-resourced legacy cities. Due a prior commitment, I missed Mark Garvin’s presentation on workforce diversity, but I was able to rejoin the meeting and participate in a “lightning round” with Michelle Kondo.

The diversity of the speakers and attendees, the depth of their knowledge, and the creative approaches to participant engagement throughout the meeting makes me wish Local Ecology were a national organization! Thank you to Sasha Tenenbaum, SUFC director, for finding a place for me on the A-Team.