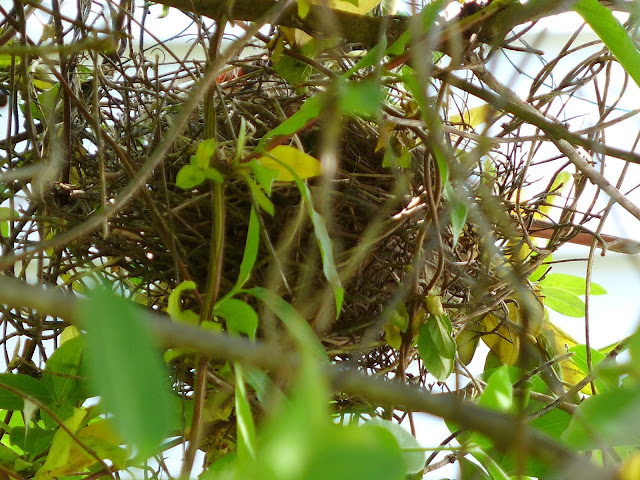 There is so much wildness in our yard in Arlington County, VA! Here's an excerpt from a recent email I sent to a friend.


[We] saw a warbler or a finch recently. There's a robin's nest in a redbud growing in the sidewalk. House sparrows are using the bird house. Unfortunately two clutches of cardinal eggs were eaten; the nest was in our lilac. There's a bat box on our chimney; we've seen them once, flying on a Saturday night. There are oh, so many rabbits. Friends had a resident peregrine for a while. These same friends also had visual access to a fox den beneath their neighbors' shed.

I wrote about the cardinals, rabbits, bats, and other Species in My Yard a couple of weeks ago, but I am going to spotlight the now abandoned cardinal nest today along with two other nests. One is a house sparrow nest inside a nest box and the other is a robin nest in a redbud growing in the sidewalk. 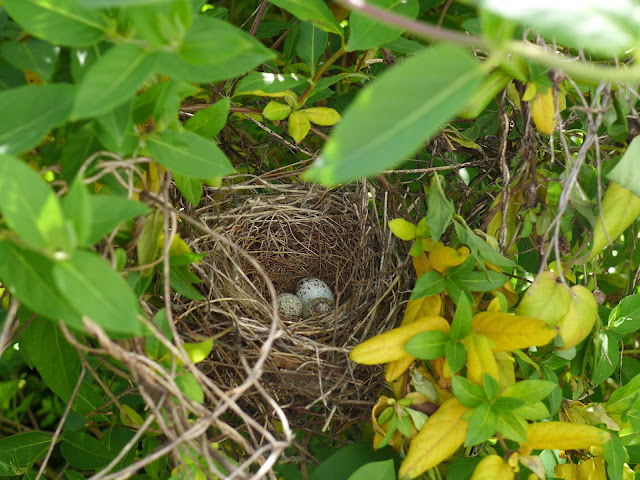 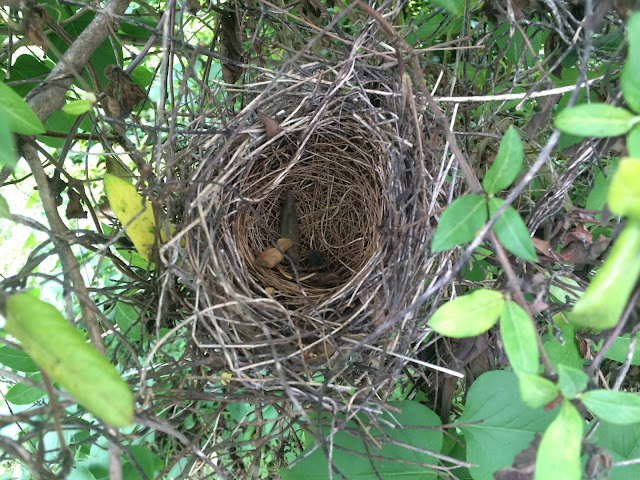 A pair of cardinals made a nest in the lilac shrub growing on the south side of our house. I discovered the nest only after seeing the male cardinal fly out of the shrub. The female was well camouflaged within the interior of the lilac as well as on the nest itself. Two clutches of eggs were eaten by a yet unidentified animal. The nest has been abandoned. 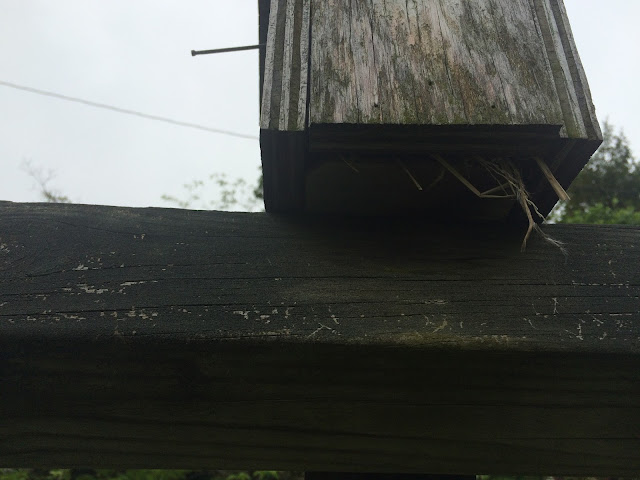 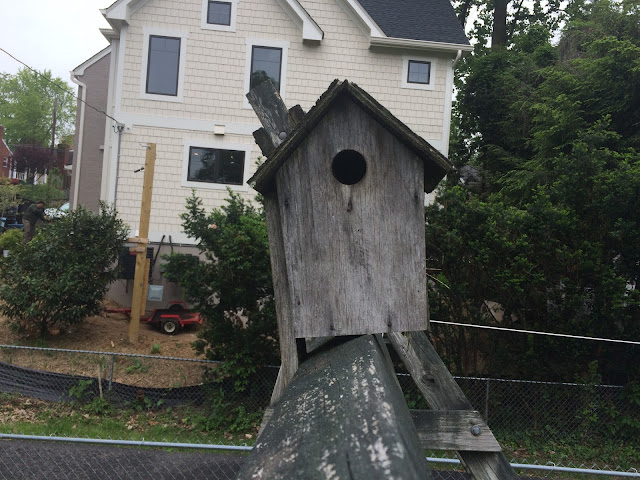 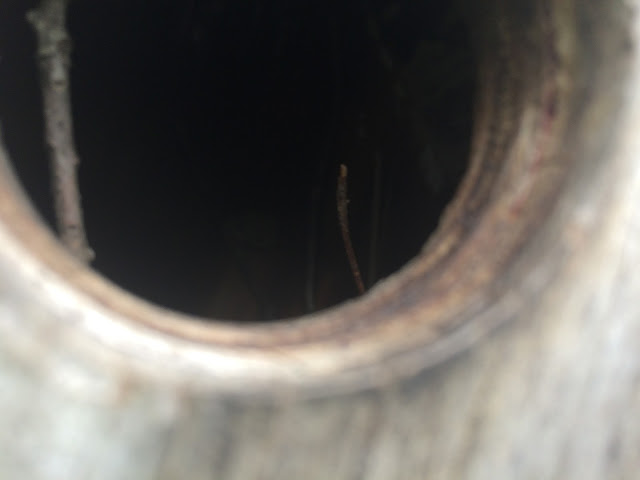 On top of the swing set in our yard is a nest box. It's old and in poor shape. A month ago or so, my son and I opened the side flap and saw a thick duff of old nest material. However, starting last week, we have observed a pair of house sparrows flying and out of the box and the male house sparrow is behaving territorially. This morning, he chased a bird out of the box! It all happened so quickly, I was not able to identify the interloper. Since the nest appears to be active, I did not want to lift the side flap to look inside the box. Curious about the state of the interior of the box, I used a selfie stick and my phone to take some photographs. It was difficult to get a clear shot of the inside of the box. 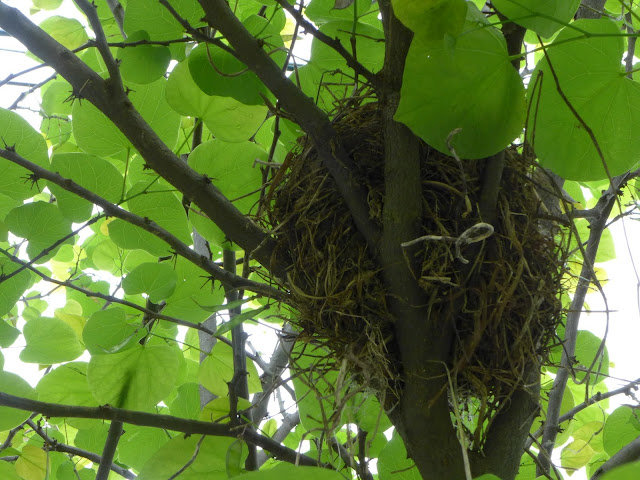 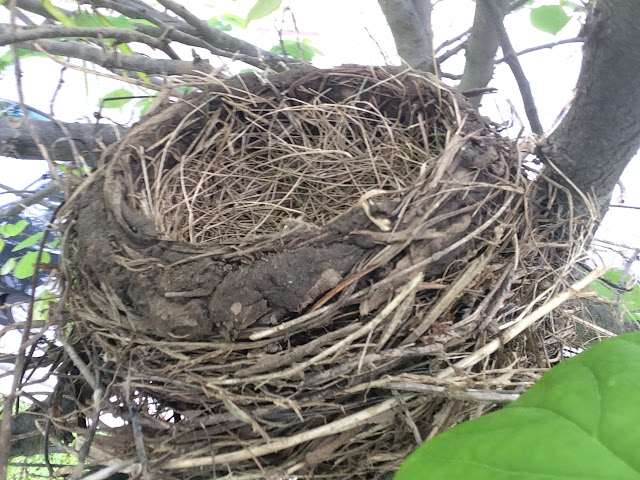 Simultaneously, a pair of robins have constructed a nest in one of the redbuds lining our street. I also used a selfie and a phone to investigate this nest. The nest is disappointingly empty. Notice the mud on the upper portion of the nest? The female typically "reinforces the nest using soft mud gathered from worm castings to make a heavy, sturdy nest." I have observed robins pulling worms out of the grass strip in the sidewalk so I know worm castings are plentiful. Hopefully the damp mud indicates that the next is still under construction, and that egg laying will follow soon.

Are you watching nests where you live?