Since last week's post about the wildlife survey in Washington Square Park, we have completed another survey, on Monday, September 26 to be precise. The new species we observed were: Black-and-White Warbler, Carolina Wren, Downy Woodpecker, Eastern Phoebe, gull sp., Magnolia Warbler, Northern Cardinal, and Swanson's Thrush. We heard but did not see White-throated Sparrow. The pair of adult Red-tailed Hawks were flying back and forth above the canopy on the western half of the park. It was an awesome experience seeing their bellies and wingspans against the sky. 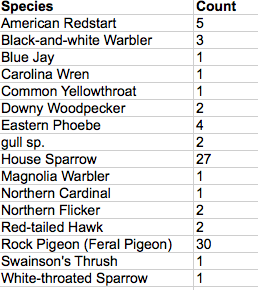 In addition to birds, we observed squirrels and mice. This data has not yet been added to the WSP Wildlife Survey 2016 map but you can see the raw numbers on the WSP Eco Projects eBird page.


What migratory birds are you seeing in your parks and backyards?