February 26, 2018
The Cornell Lab of Ornithology and the National Audubon Society launched the Great Backyard Bird Count (GBBC) in 1998. It was the first web-based citizen science project to collect data on wild birds. The most common type of citizen science project is one designed by institutional scientists and the public participates by collecting and submitting data. This form is known as contributory citizen science. In the case of the GBBC, participants observe birds and record species and number of individuals using the eBird app or website. The minimum observation period is 15 minutes. GBBC lasts for four days; this year the count was held between February 16 and 19.

I regularly participate in a vertebrate wildlife survey in Washington Square Park as part of my work with Washington Square Park Eco Projects. This type of citizen science is the collegial form meaning that there is minimal to no distinction between "the scientist" (the creator/initiator) and "the public" (contributor/data recorder). The bird population data collected by Eco Projects is submitted to eBird linking this collegial citizen science project to a contributory one. Eco Projects has directly participated in contributory citizen science projects such as the 2017 City Nature Challenge. You can see our observations on iNaturalist. We will participate in the 2018 City Nature Challenge. In collaboration with SciStarter we piloted WSP Nature Finds at the 2015 World Science Festival.

One of the founding goals of the organization was to create opportunities for people to engage with the natural resources of the park and we envision greater public participation in at least the bird count portion of the survey. The GBBC counts we hosted are a first step. 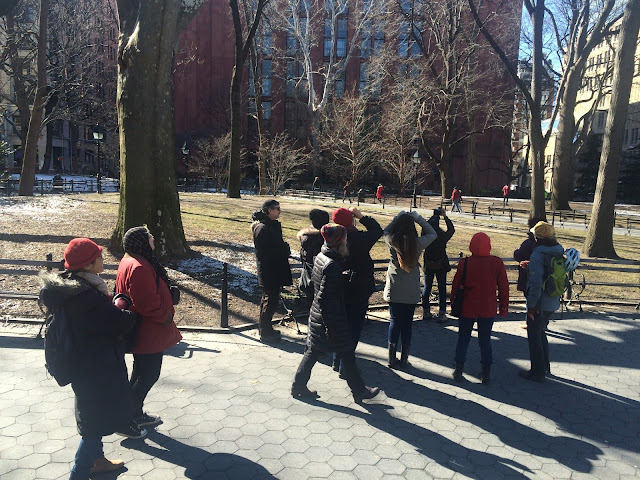 On Saturday, February 17 and Sunday, February 18, Eco Projects hosted two bird counts as part of the GBBC. This was the first time I participated in the bird count. Each count lasted approximately 90 minutes and followed the WSP Wildlife Survey transect. Heather Wolf led the Saturday walk while Loyan Beausoleil led the Sunday one. The total number of participants on each day was 12. The number of species we observed on each was coincidentally nine. There was some overlap in the species observed on each day. On both days we saw American Robin, European Starling, House Finch, Red-tailed Hawk, Rock Pigeon, House Sparrow, and White-throated Sparrow. On Saturday we saw Blue Jay and Mourning Dove while on Sunday we saw Yellow-bellied Sapsucker and Downy Woodpecker. (We did see Mourning Dove on Sunday but they were outside the park.)

The high point on both days was watching the soaring flight of the Red-tailed Hawk pair. The hawks made multiple appearances throughout the length of Sunday's walk. A highlight on Saturday was watching courtship behavior between two pigeons followed by spotting several House Finch. The spotting of the hawks, pigeons, and finches happened consecutively and over a short length of the transect. On the other hand, the observational highlights on Sunday were interspersed both temporally and spatially. As well, Downy Woodpecker and Yellow-bellied Sapsucker are charismatic species. While a Downy is considered a common bird, it's not an everyday bird in the park. The sighting of the woodpecker was a capstone to the walk. My favorite sighting occurred roughly mid-walk and was of the Yellow-bellied Sapsucker. It was a female black-headed morph. This variation was only recently included in the Sibley Birds East

There were no low points on the counts. As mentioned, even observing everyday birds provided opportunities to learn new facets of a species' life history and to simply be fascinated. Pigeon courtship is quite engaging. Similarly, don't overlook a flock of sparrows. I appreciate the plumage of House Sparrows though you'll find some who don't, and among that group of browns and tans you might find the white throats, black and white crown stripes, and yellow lores of the White-throated Sparrow. Always look closely! 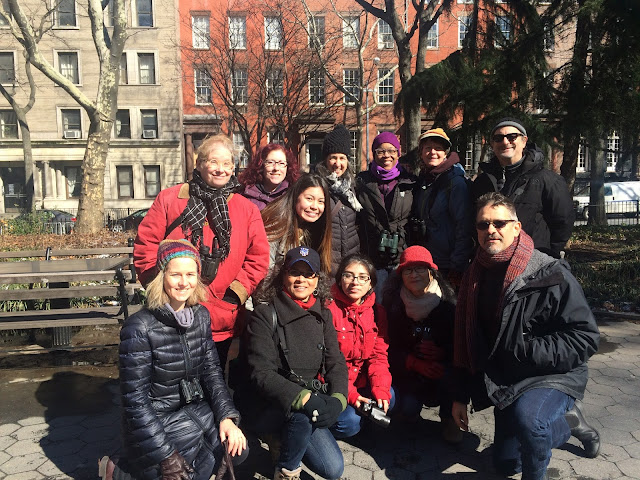 Reflecting on both counts, I became attached to community science, a term I had seen used as a hashtag on Audubon social media posts. I’d like to use the term in lieu of citizen science for a couple of reasons. One, "citizen" feels exclusionary in our current nationalist political environment. Two, although "community" can also have tinges of belonging and not belonging, I think it speaks more clearly to the banding together of individuals to make and record natural observations which when analyzed can have significant impacts on communities of non-human animals, plants, fungi, etc., and people. In addition to the observing birds both visually and aurally, friendships were strengthened and new relationships were begun. I also like to think that the park was perceived as a nature-full place.

I'd love to hear about your GBBC experience, or any other nature finding events.