April 24, 2018
It can be tricky to find the live video of the NYU Hawk Cam. Here's the link. One of the first times I attempted to watch the live feed, I watched several minutes of a video from the 2017 season. All was not lost, however. The clip I watched showed in stark relief the trash the Red-tails had used to construct and decorate their nest. The “wrong” video inspired this post about nesting materials. 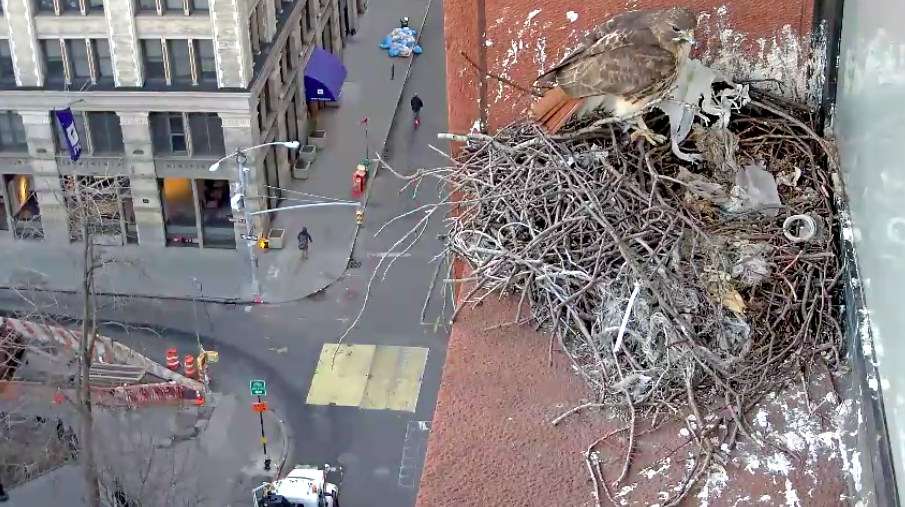 Not all birds build nests. Of the species that do build nests, not all of them decorate their nests. Decoration can accomplish one or more of several goals: (1) camouflage the nest, (2) attract a mate, (3) signal status, or (4) improve health outcomes. Zebra Finch males are responsible for nest building and they choose nesting materials that match in color the background of their nest locations, according to research by Bailey et al. 2014. The building, maintenance, and defense of its elaborate nest communicate to bowerbird females the fitness of the male architect as studied by Borgia et al. and reported in the New York Times. Male Black Kites in Spain almost exclusively use white plastic to signal their prowess. White plastic was chosen over other colors of plastic because of its "long-distance visibility." Sergio et al. observed that "Kites with much plastic in their nest were rarely challenged, while those with little were challenged daily, even hourly" as reported by Wired.com. House Sparrows and House Finches have been found by Suárez-Rodríguez et al. (2012) to use cigarette butts to reduce parasite populations in their nests.

Typically, nest-building birds use natural materials such as sticks, feathers, moss, leaves, etc. to construct and decorate their nests. However, in the last two examples in the previous paragraph, we see that birds are incorporating artificial materials in their nests. Josué Corrales, writing for The Nature of Cities, points out that the use of artificial materials by birds is influenced by proximity to a source of such materials. This can be the case whether the nest is located in a city or in a "natural area". In addition, birds are making substitutions because particular types of natural materials such as clay are in limited supply in urbanized areas.

Corrales concludes his essay arguing that the use of artificial materials can negatively impact reproductive success. Earlier he provided two examples of poor outcomes for birds who use plastic materials. Plastic can increase the temperature in the nest which is harmful to egg maturation and chicks could become entangled in plastic items. On the flip side, he notes that the use of novel materials could camouflage the nest from predators. Also, items like cigarette butts act as a parasitic repellent. Suárez-Rodríguez et al. (2017) found a downside to the use of cigarette butts, however. Although the nicotine in the butts reduces the numbers of ectoparasites, direct exposure to the same nicotine during breeding activities such as nest building and incubation was observed to be toxic to the House Sparrows and House Finches in the study.

The first female of the pair of Red-tails at Washington Square Park died from heart failure following surgical amputation of her foot. One of her feet became necrotic after the leg had been entangled in plastic line for several weeks reported the New York Times. In the lead image of the Times article, the same plastic material is seen in the structure of the nest. 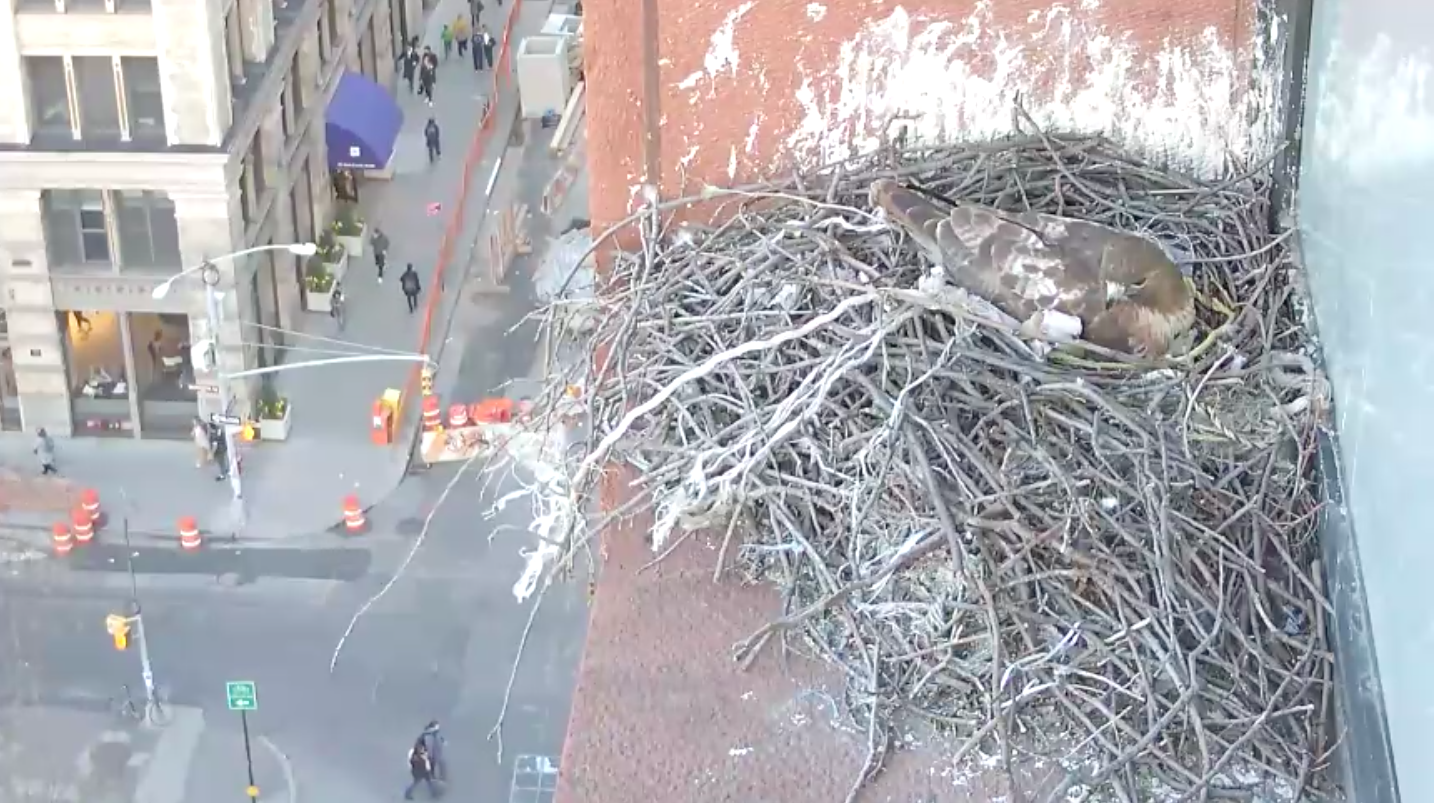 The typical form of a Red-tailed Hawk's nest is a "bulky bowl of sticks, lined with finer materials, often with leafy green branches added," according to Audubon.org. In the lead image of this blog post, you can see that the 2017 nest was a large bowl constructed of sticks and lined with a wide assortment of plastic and plastic-derived materials. The current nest has fewer novel materials but artificial materials have been used to construct, line, and possibly decorate the nest. There are no fine plastic strings or lines in the current nest so the risk of entanglement is quite low. There don't appear to be any green materials in the nest though if there had been they are probably no longer brown. I am a regular watcher of the live feed and haven't noticed green materials being brought to the nest. The nest is across the street from 9.75-acre Washington Square Park. The park's vegetation is largely deciduous but there are evergreens including pine, spruce, cedar, and holly. I'll have to pay close attention to nest refreshment activities. In Life Histories of Familiar North American Birds, Arthur Cleveland Bent writes, "Some nests are profusely and beautifully lined with fresh green sprigs of white pine, which are frequently renewed during incubation and during the earlier stages in the growth of the young.frequently renewed during incubation and during the earlier stages in the growth of the young."