May 17, 2018
I am a huge fan of walking tours, especially ones set in cities. I typically veer towards nature-oriented ones, so for example, I joined a guided bird walk in Battery Park on Tuesday and saw a record number of species (for me), of which at least 11 of the 33 species were warblers. The tour I share in this post was billed as "A 'GreenNeighborhoodod Tour." It was led by Bettina Johae, co-founder of aplusnyc.net, an architecture and art tour company based in NYC. 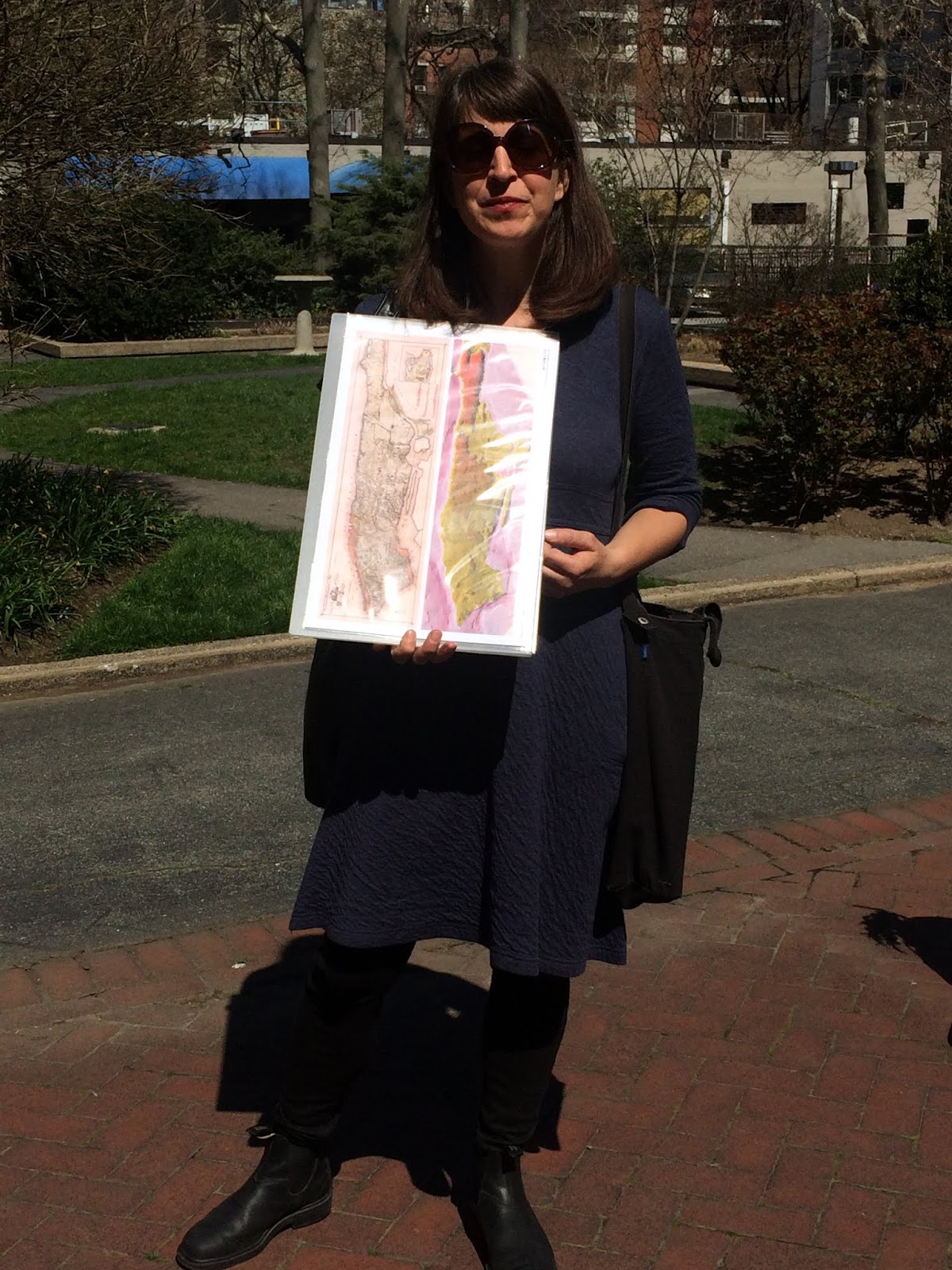 We met on a gorgeous Saturday morning in the Sasaki Garden at Washington Square Village, the first parking garage roof garden (in the U.S., I think). The garden was completed by the landscape architecture firm of Sasaki, Walker and Associates in 1959. Ms. Johae provided an overview of the tour and discussed the natural history of Manhattan and the Greenwich Village neighborhood. The island of Manhattan was known as Mannahatta or "island of many hills" by the Lenape. Greenwich Village was marshland with a creek coursing through it. A couple of years ago I walked a self-guided tour of artist Beatrice Glow's Lenapeway and contemporary native gardens.

From the Sasaki Garden, we headed south to another superblock, the New York University Silver Tower designed by architect I.M. Pei. At the center of the superblock are several small greenspaces one of which is locally known as the "oak grove" filled with red and willow oaks and a young white oak. A former lawn area was transformed into the Urban Farm Lab in 2013. My family has been assigned a plot in this garden and I'll share updates as soon as we break ground.

The next stop was the Time Landscape, a land art project developed by Alan Sonfist. I've been researching this landscape and learned that Sonfist conceived of it as a monument to "the history of the natural environment at that location" pre-European settlement. He had hoped that there would be many such monuments installed throughout the city but Time Landscape is the only one. This idea of a living memorial to pre-settlement nature in what are now dense residential neighborhoods has not been communicated very well by the artist. Some people perceive the site to be a place of "weeds." Others, including me, value it for its very passive aspect. As far as I know, only one layperson has a key to the gate. Plants, both cultivated and spontaneous, and wildlife get to enjoy it at their pace. 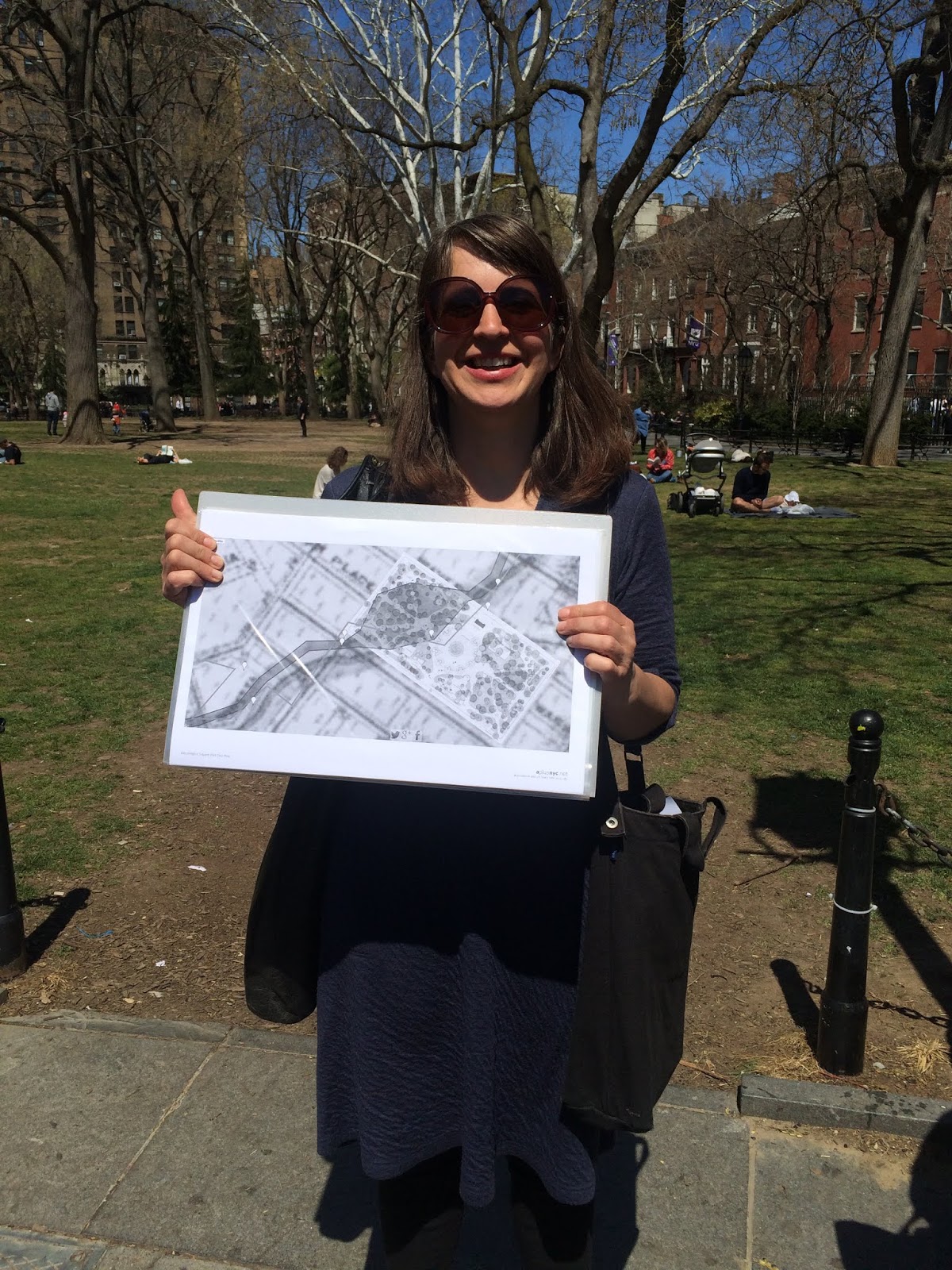 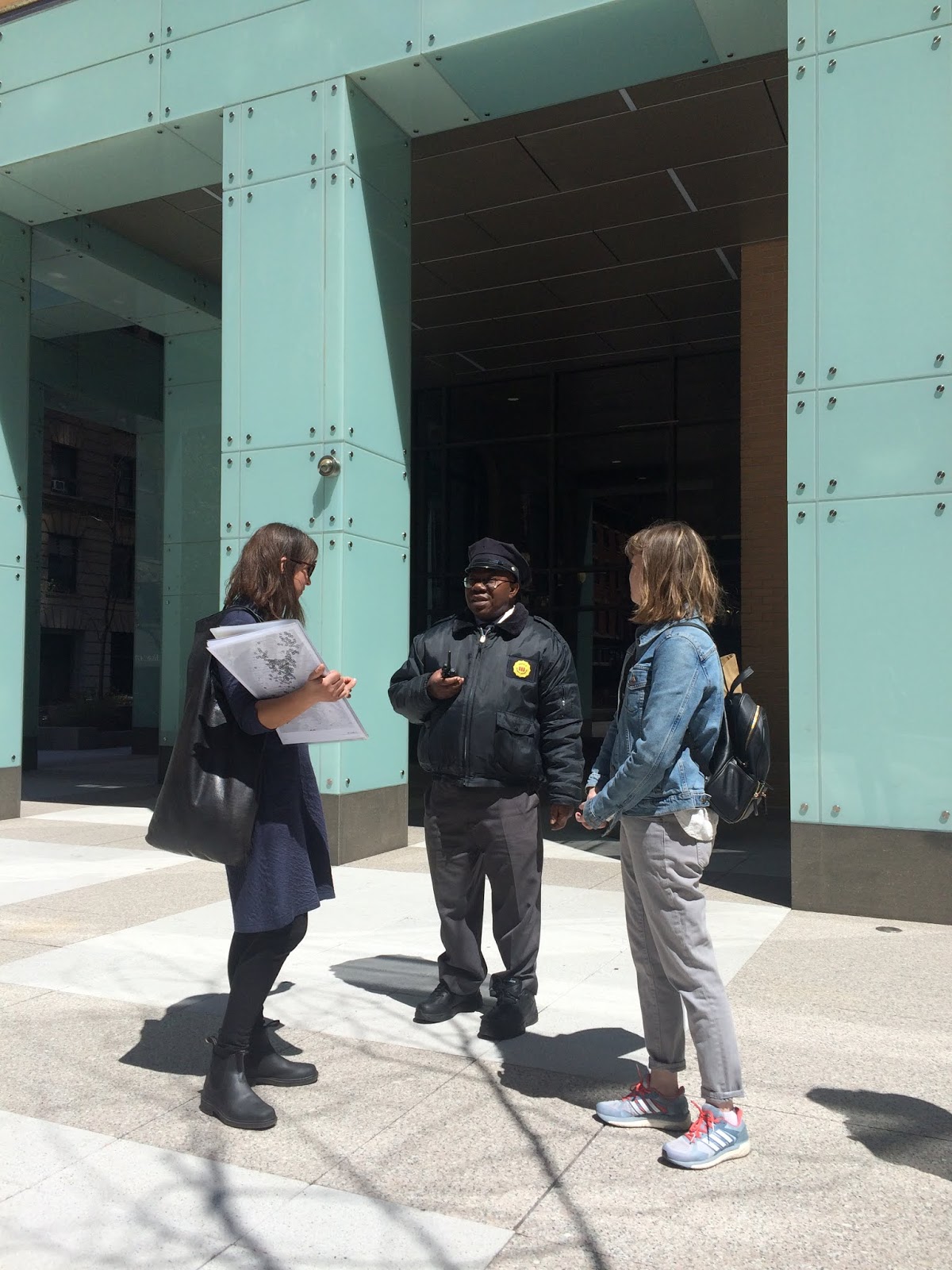 The next stop two stops were examples of POPS or privately owned public spaces. An encounter at the first stop highlighted one of the challenges of these spaces. We were told by a security guard that we could not gather in the plaza space of 300 Mercer Street. This is a publicly accessible space but it is not signed to indicate public use. Ms. Johae advised the guard our right to be in the space even when he said he would call the police. He did not. 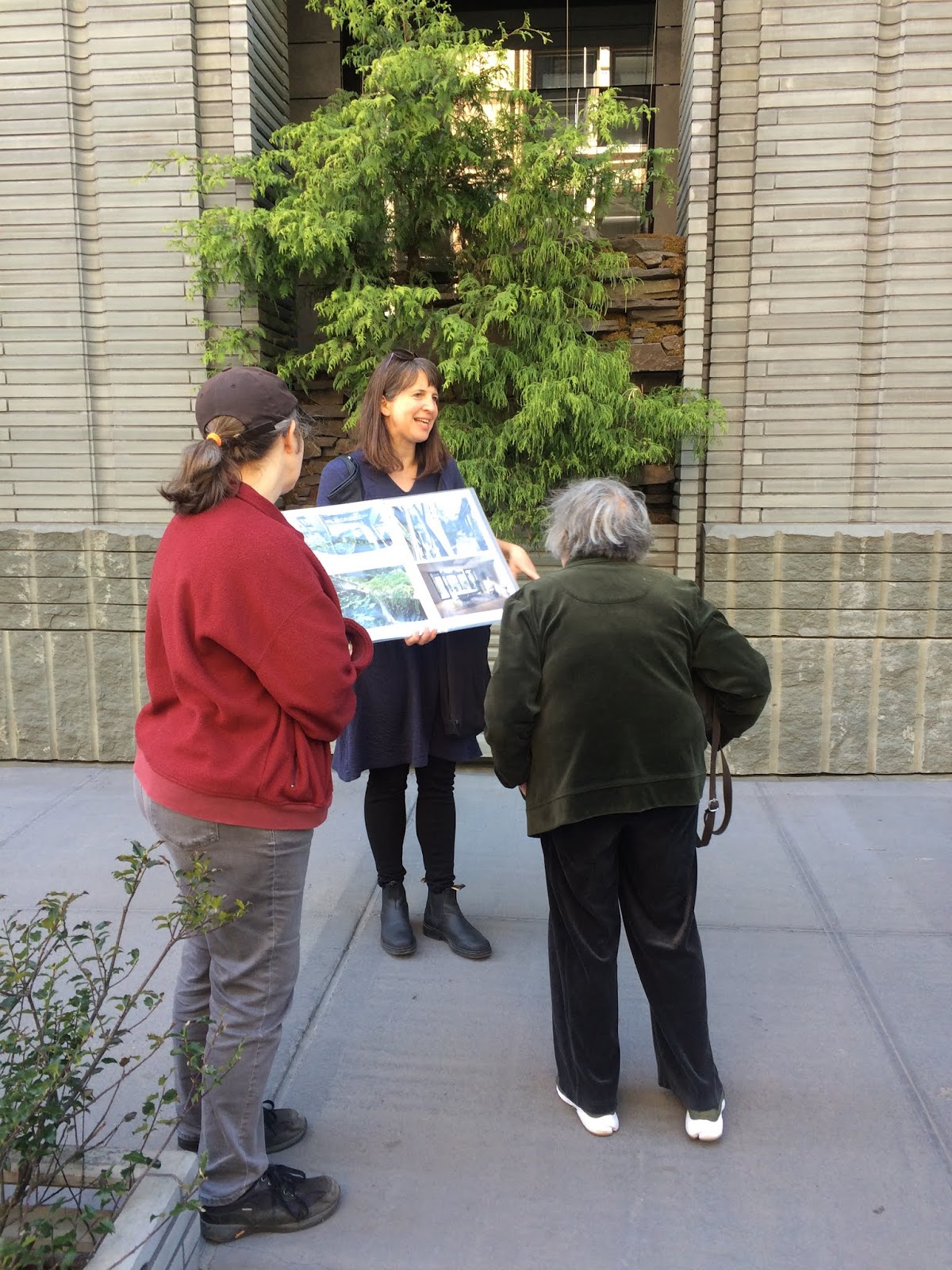 There were four stops remaining and I'll focus on two of them. One was the facade landscape of 41 Bond Street. This one of my favorite facades in the neighborhood. The bluestone cladding is inviting though I've never touched it. I'm always afraid that security personnel from the building would come out with harsh questions. This is a luxury building; the average sale price per square foot is $2,661. Each window has a landscape planter. The building has a green roof as does the entrance marquee. 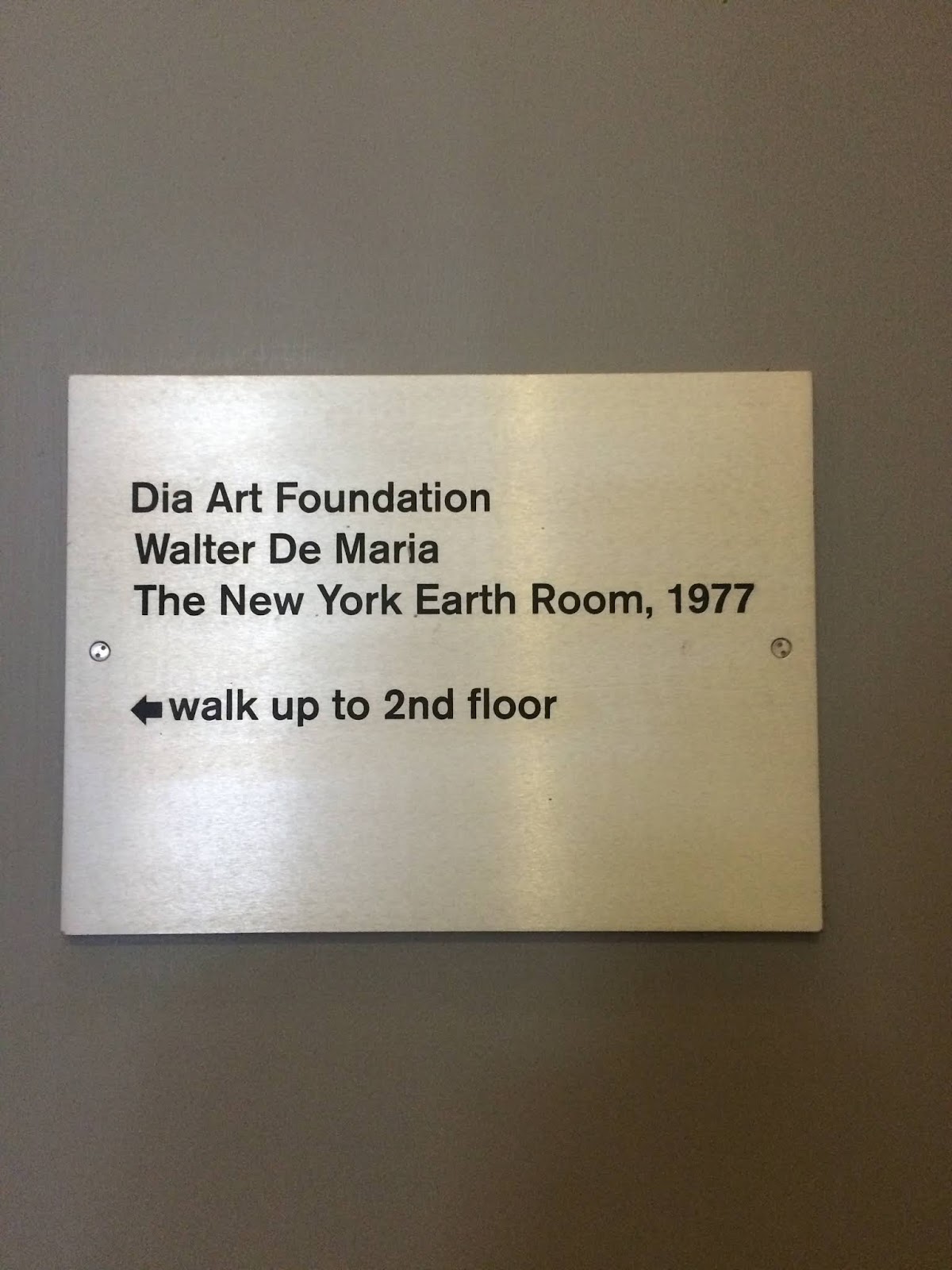 The final stop was a place I have been wanting to visit. My son had been there before me. It is Walter de Maria's The New York Earth Room. The installation is on the second floor and the 3,600 square foot room is filled with 280,000 pounds of earth, peat, and bark. The dirt has been in the space since 1977. My first impulse was to sink my hand into the earth but you are not allowed to touch the art. Also, photographs are not allowed. View the sculpture here. The smell of the sculpture is overwhelming; you feel as if you've stepped into a moist temperate forest, or an old, unfinished New England basement.

My daughter accompanied me on this tour and she did so with minor fuss. I include this information here as a testament to the vibe and content of the tour. Also, there were two older girls (by a few years) on the walk and my daughter delighted in engaging with them. Ms. Johae was knowledgeable and affable. The walk went longer than advertised but most participants stayed until the end and even lingered.

Do you take walking tours in your home city?