August 16, 2018
There are many fascinating places in any given city. Instead of limiting the "5 Things I Like About" series to cities as I've done in the past, I've expanded it to include neighborhoods and parks, such as Domino Park which is featured today. 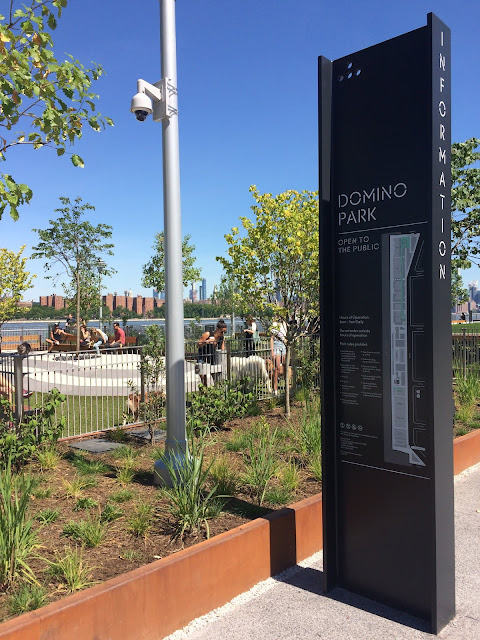 I am kicking off the revamped 5 Things I Like about series with Domino Park, the newest public park in NYC. The park, however, is not owned by the city. Domino Park is a 6-acre open space built and operated by real estate firm Two Trees Management Company. The park sits on a portion of the former Domino Sugar Refinery site. Two Trees has prepared an overview of the history of the refinery and the Williamsburgh waterfront.

The five aspects of Domino Park I like the most are: 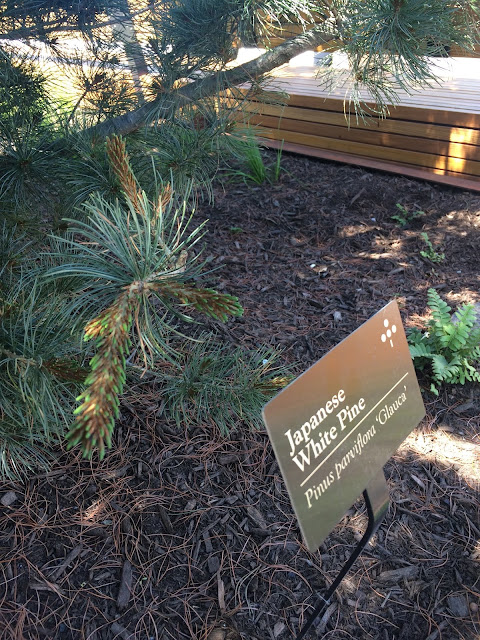 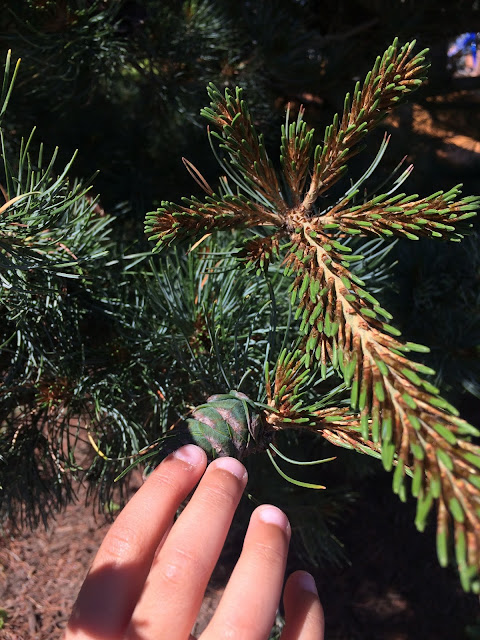 The botanical markers were one of the first elements I noticed in the park. What can I say? I am plant-sighted. The park is designed with blocks of tree species. Within each group, there is a marker listing the common and Latin name of the species. The park is not a formal arboretum, but it's mimicking one with the provision of identification signs. I don't know if the intention was purposeful but either way, it is a great information tool. Another striking botanical feature of the park is the palette of plant species. Once an urban forester, always an urban forester, so I was tree-oriented in my observations. I counted at least 9 species including Pin oak, Tupelo, Purpleleaf plum, Willow oak, Honeylocust, Pitch pine, Japanese white pine, and Crabapple. 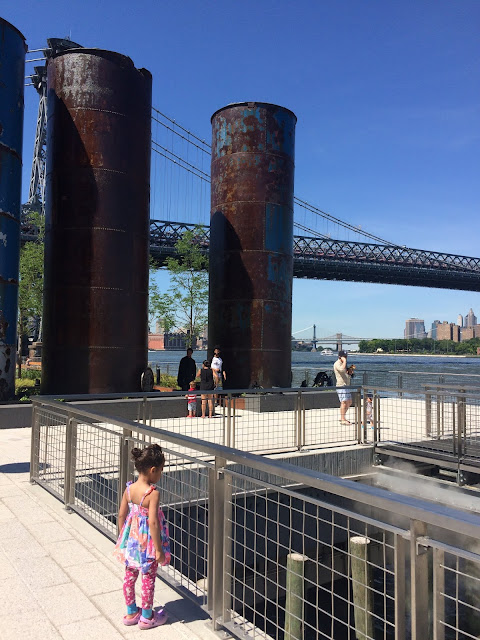 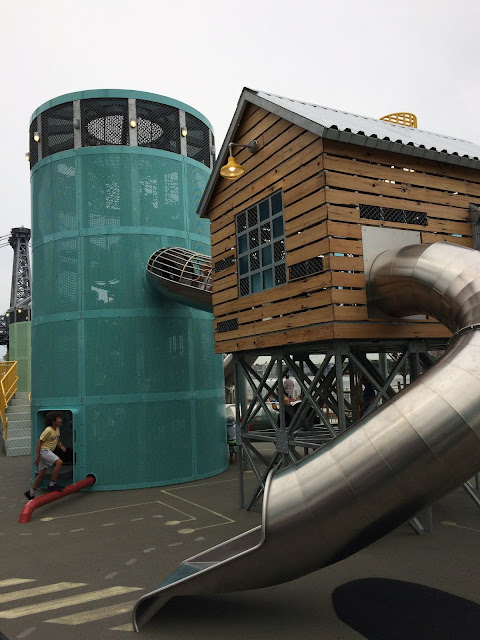 I accompanied my younger child to the park on two occasions. Her focus was play. We spent time at the fog bridge, the splash pad, and her favorite, the actual playground. While technically the fog bridge is not a play area, she enjoyed running through the mist. The splash pad is more fun on a hot and humid day. The playground is always fun. It's where we spent the most amount of time. I quite like that it's difficult for adults to maneuver the equipment in this playground. I think it provides children much needed adventure and autonomy. I've also observed at this playground that adults respect the age limitations posted on the equipment. 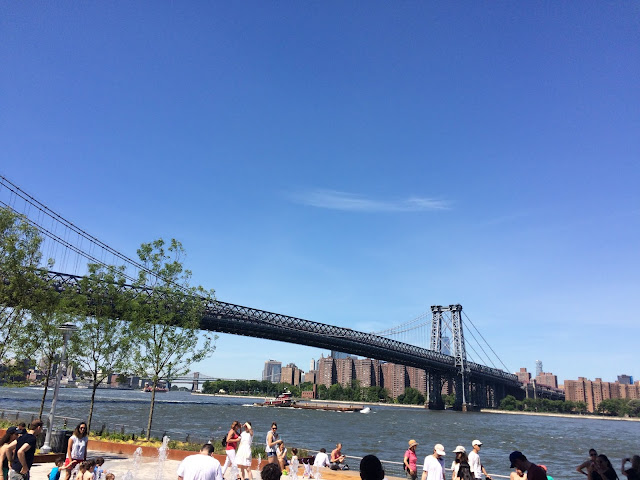 New York City is composed of islands plus the Bronx. Manhattan and Staten Island are islands. Brooklyn and Queens are on Long Island. It can be challenging to see and get close to the water around us. This park gives us another piece of recreational waterfront. The East River, a tidal estuary, really, is a striking waterbody. It's broad and fast.

View of the Williamsburg Bridge

You can see the entire span of the bridge from the park. The Williamsburg Bridge is a multimodal transportation system supporting train, auto, walking and cycling. 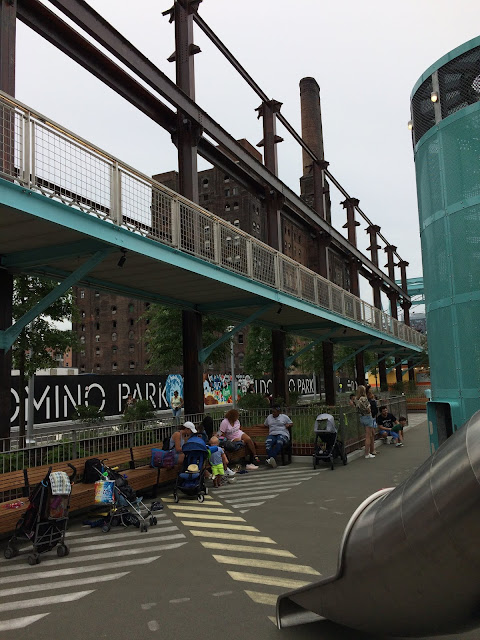 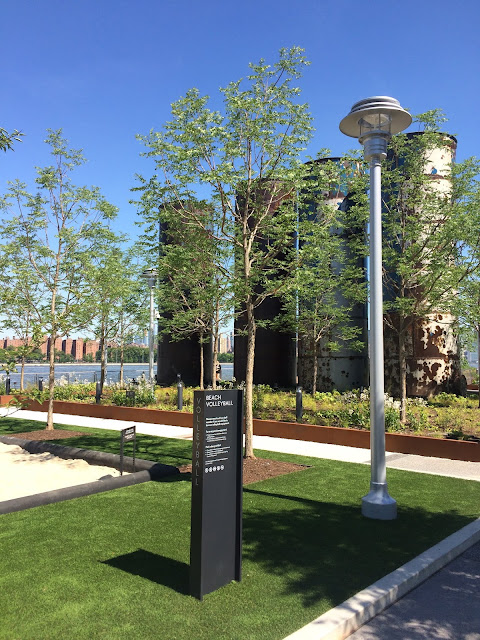 The practice of salvaging and incorporating industrial artifacts into contemporary landscapes is nothing new. In NYC, the High Line is perhaps the most well-known park to design with artifacts in mind. Other parks, such as Gas Works Park in Seattle (Richard Haag, 1975) and Landscape Park Duisburg-Nord in Germany (Peter Katz, 1994), set this precedent, however. Given this history, I appreciate the use of salvaged, and re-created, components of the site's former industry. As is noted Yoshi Silverstein's review of Ellen Brae's book, Beauty Redeemed: Recycling Post-Industrial Landscapes, for ASLA The Dirt, these post-industrial parks can make contributions to sustainability goals in terms of recycling materials, can remind of us the various cultural forms of capitalism, and finally, can provoke us to think about the mutability of the landscape and at least from a design perspective, to appreciate and accommodate the existing fabric of a landscape. 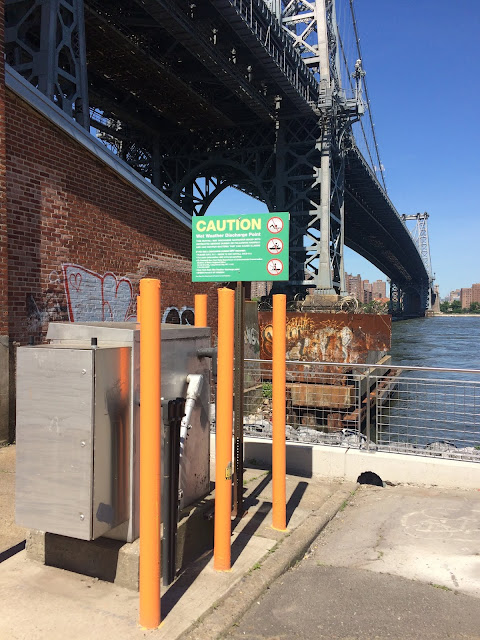 A couple of less shiny aspects to note (again). One, Domino Park is not a publicly-owned or operated park but during our visits it has felt public-spirited. Two, A "wet weather discharge point" is located at one end of the park (see above photo) meaning that when it rains, stormwater runoff and raw sewage might be released into the East River at this location.

Finally, how did we travel to Domino Park? We took the J/M to Marcy Avenue.