Four large trees were removed in 2017. The first of the four was a 29-inch diameter London plane tree (Platanus x acerifolia) in the "big kid" playground in the northeast section of the park. Two similar-sized London plane trees remain in the playground. I assume that the work was completed by NYC Parks and or its contractor. The other three large trees removed in 2017 include a 28-inch pin oak (Quercus palustris), a 47-inch London plane tree, and a 25-inch green ash (Fraxinus pennsylvanica) all of which were removed by a contractor. All three trees were compromised by fungal disease, cracks, rot, root damage, and cavities. In the case of the pin oak in the northwest section of the park, WSP Eco Projects first reported the presence of oak bracket to NYC 311 and NYC Parks. I believe this observation precipitated the removal of this oak. The poor health of the plane tree and ash were discovered by Emerald Tree and Shrub Care Company, the arboriculture firm contracted to prune 270 shade trees in the park. 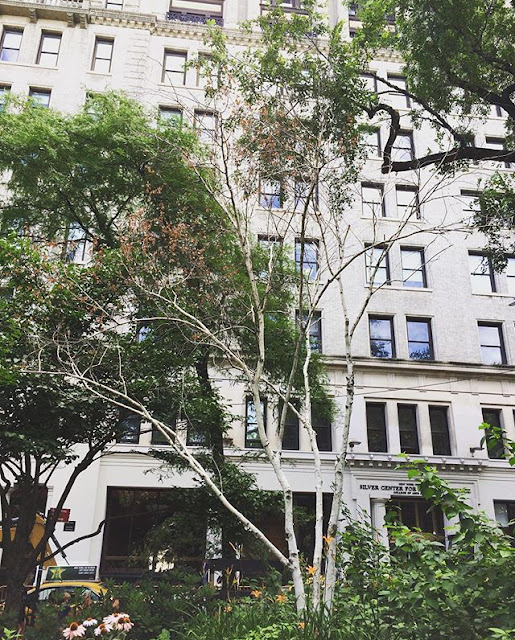 Two trees were cut down in 2018. One was a dead paper birch (Betula papyrifera) in the northeast corner of the park. The birch was planted in memoriam to actor Spalding Gray. I did not see the removal so I don't know who performed the work. Damage from an early snowstorm in November 2018 was given as the reason for the removal of the second tree, a dawn redwood (Metasequoia glyptostroboides). The WSP Conservancy determined that the dawn redwood near the Thompson Street entrance had sustained irreparable damage to its leader and cut down the tree. 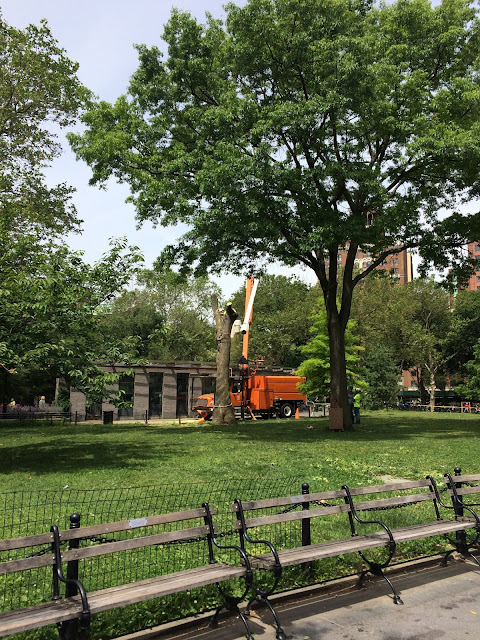 So far in 2019, four trees have been removed. A deodar cedar (Cedrus deodar) was removed by NYC Parks in the early part of the year. The tree began to lean after its root zone was compromised by a extensive rat burrow. The other three trees were removed this month.  It is likely that their removal was precipitated by a falling limb of a different tree that critically injured a park visitor in May. A 23-inch diameter Northern red oak (Quercus rubra) south of Holley Plaza and a 33-inch diameter American sycamore (Platanus occidentalis) in the southwest corner were cut down. The third tree was 30-inch diameter Ailanthus altissima. Can you believe there was such a big tree-of-heaven growing in the park?! Among the trees, the health issues ranged from extensive rot and and cavities to cracks and large dead limbs. The removal of these four trees adds up to a loss of 86 inches of tree diameter. 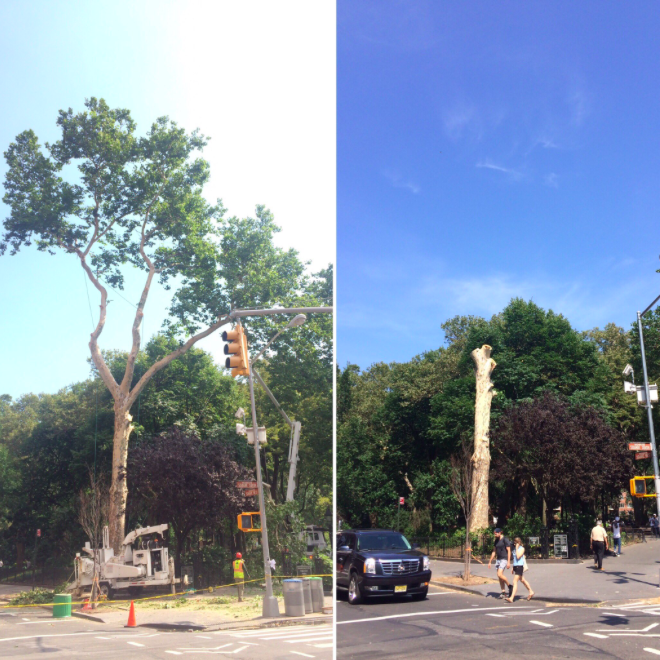 None of the 10 trees mentioned in this post have been replaced. It makes sense that the trees removed this year have not yet been replaced. The area that hosted the dawn redwood has been replanted with herbaceous perennials as too has the spot in the southwest that hosted the plane tree. The big north lawn will undergo a major repair soon so I don't expect that the pin oak in the northwest will be replaced until that the lawn work is completed. The paper birch has not been replaced. A river birch would be a great addition to the park. The green ash location has not been replanted. Due to the presence of emerald ash border, NYC Parks is no longer planting ash trees. Beyond species selection, I'm assuming that a tree will not be replanted in that location because of heavy foot traffic from the "webs" play feature. Finally, a replacement tree hasn't been planted in the larger playground.

New York City has been a strong proponent of increasing urban tree cover as evidenced by various policy instruments including Million Trees NYC. Yet, small parks such as Washington Square Park are underrepresented in these grand visions of nature in the city. In my role with WSP Eco Projects, I have been advocating for a small parks ecology initiative to assess the environmental benefits provided by small parks as well as to actively manage for succession in this park type. Eco Projects is preparing a draft tree plan for Washington Square Park. Several guiding questions are: Which tree species will thrive in our climate-affected city? Which trees and other plants will provide the optimal habitat for birds and other animal wild life? How should we diversify and enrich our canopy cover? 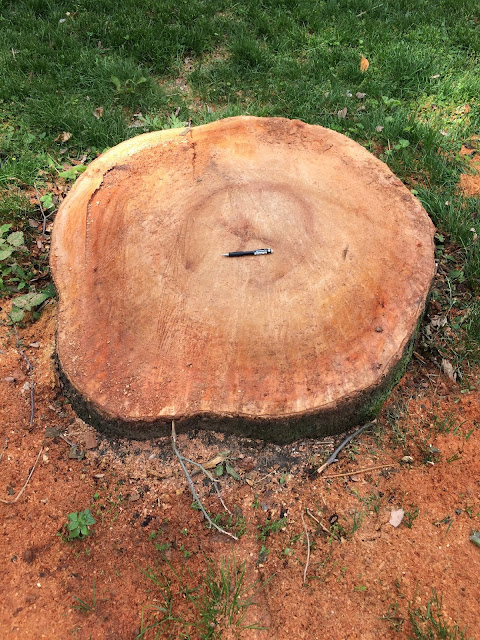 Washington Square Park looks well canopied. Looking at an aerial image, approximately 66% of the park is covered by tree canopy, so the removal of 10 trees might seem insignificant. However, the four trees cut down in 2017 alone equaled approximately 211 inches of tree lost from the park. If a 20" plane tree is estimated to be 33 years old* then the 29" and 47" plane trees were likely 47 and 77 years old respectively. The 28" pin oak was likely over 46 years old, and the 25" green ash could have been 83 years old. These four trees accounted for an estimated 253 years of tree growth. It is critical that we begin to plan for regrowing the canopy in the park as trees, especially big ones, are removed because of death and/or potential hazards.

* Tree age estimates were taken from "Estimated Age of Urban Trees by Species and Diameter (DBH)" by City Parks Foundation.