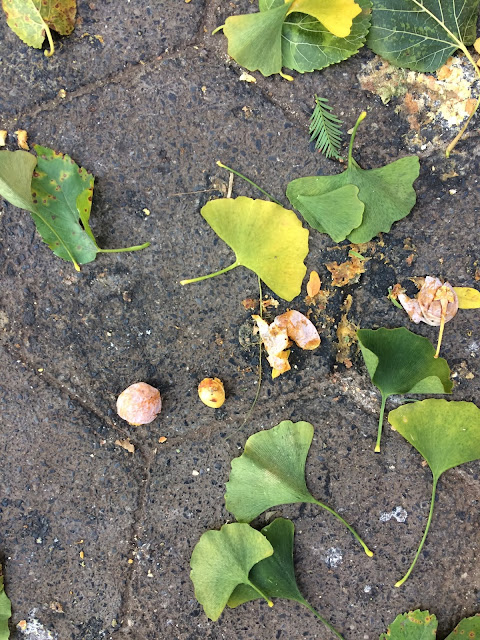 Ginkgo biloba is one of my favorite trees. The bi-lobed, fan shape leaves are pretty, its winter silhouette and straight bole are striking, and its has a very ancient pedigree. I have written about the ginkgo "fruit", ginkgo in art and culture, and a brief natural history of the ginkgo. In each of these previous posts, I have mentioned the Ginkgo biloba "fruit." The Ginkgo biloba "fruit" is not a botanical fruit. Ginkgo biloba is a gymnosperm meaning it has naked seeds. The tree's seeds are not enclosed in an ovary. (The fruits we eat are ripe ovaries, FYI.) The botanical term for the flesh that covers the ginkgo seed is sarcotesta. When this flesh is crushed underfoot, it releases an off-putting odor. The flesh can also irritate human skin.

Until last fall, I had not ginkgo seeds. My first experience eating ginkgo seeds was at a C.U.R.B. banquet held on Governor's Island in October 2019. The seeds were chewy and tasted nutty, similar in flavor to a pistachio. Yum! I vowed then to harvest fallen seeds and cook them. One day last November on a walk in my local park, I saw two women of Chinese descent collecting fallen seeds. I walked over to the tree and took out two plastic zip bags from my back pack. I noticed the women were only collecting the seeds that did not have much or any of the pulp so I did the same. The women were warm; they offered gloves and plastic bags and told me about other seed locations in the park. I did not collect many seeds. I picked up about a dozen or so which I thought would be the right amount for me and my family for a first tasting. I had read that the recommended daily amount to eat was a handful of nuts. When I returned home I stored the seeds in the refrigerator. 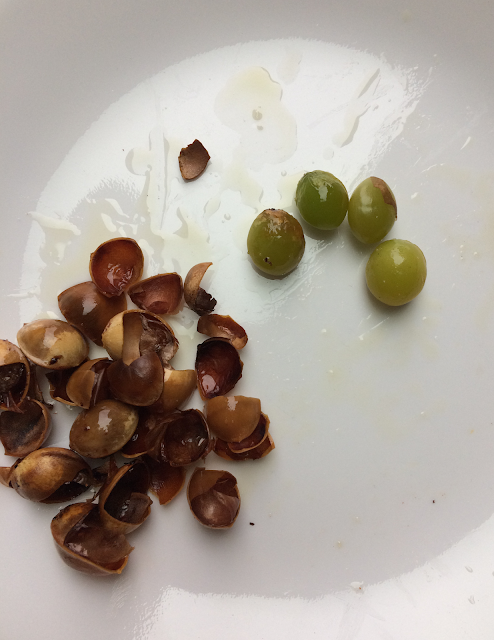 A few days later I found a straightforward roast recipe on the Kitchn. I washed the dirt and remaining pulp from the ginkgo seeds then dried them. I heated a tablespoon of olive oil in a skillet to which I added the seeds and salt. I cooked them until the seed coat split then turned off the heat. I transferred the seeds to a plate to cool then removed the nuts. The vibrant green nuts (the true color was not captured in the above photo) were beautiful and looked appetizing. Opinions varied on the flavor. I really liked the nuts. I found them chewy and nutty, and wish I had collected many more to make additional batches. One member of my family refused to try the nuts.

Ginkgo biloba lose their most of their leaves in a single leaf drop in the fall but the nuts can linger on the tree through the winter. There are still trees in fruit in my neighborhood. There have been recent fruit falls, too.

Have you cooked and/or eaten Ginkgo biloba nuts? Please share your experience in the comments.